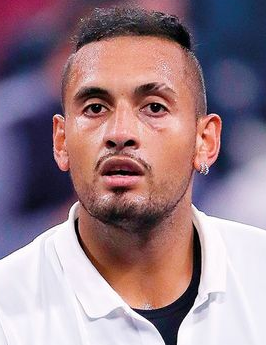 Nicholas Hilmy Kyrgios famed as Nick Kyrgios is an Australian professional tennis player who is ranked No. 30 in the world in men’s singles by the Association of Tennis Professionals (ATP)as of August 2019 and was the highest-ranked Australian in the ATP rankings. Overall, he is a very talented person.

Australian Nick Kyrgios said it was “not the correct choice of words” to claim the ATP was corrupt but said it was guilty of double standards. The world number 30 clarified the comments he made on Tuesday after he was asked about the $113,000 (£92,580) fine for his behavior at the Cincinnati Masters earlier in August. “I acknowledge I’ve deserved fines and sanctioning at times,” Kyrgios tweeted. Following his US Open first-round win over Steve Johnson, the 24-year-old was asked whether he had been affected by the fine and responded: “Not at all. The ATP is pretty corrupt anyway, so I’m not fussed about it at all.” During Tuesday’s match at Flushing Meadows, Kyrgios received a code violation for swearing and clashed with umpire James Keothavong for allowing spectators to enter the stadium while he was serving.

Where was Nick Kyrgios born?

On 27th April 1995, Nick was born as Nicholas Hilmy Kyrgios in Canberra, Australia. His nationality is Australian and his ethnicity is White. He was born to a Greek father, Giorgos (“George”) and a Malaysian mother, Norlaila (“Nill”). His father is a self-employed house painter, and his mother is a computer engineer. His mother was born in Malaysia as a member of the Selangor royal family but dropped her title as a princess when she moved to Australia in her twenties. He has two siblings, brother Christos, and sister Halimah. He attended Radford College until Year 8 and completed his Year 12 certificate in 2012 at Daramalan College in Canberra. As of 2019, he celebrated his 24th birthday.

How tall is Nick Kyrgios?

Nick is a very handsome tennis player with a tall height of 6 ft 4 in or 1.93 m. He has got an athletic body build. His balanced weight consists of 85 Kg. His other body measurements will be added soon.

Nick is in a relationship with Croatian-Australian tennis player Ajla Tomljanovic. They briefly broke up after his loss at Wimbledon 2017, when Kyrgios was photographed dancing and clubbing with other female tennis players. He reaffirmed their relationship during the 2018 Australian Open.

What is Nick Kyrgios net worth?

The net worth of Nick will be surely in million but he has not revealed it. His exact salary has also not been revealed yet but it will be added soon. His major earning is from tennis career. He also earns from endorsement such as Yonex, Nike and more.

Our contents are created by fans, if you have any problems of Nick Kyrgios Net Worth, Salary, Relationship Status, Married Date, Age, Height, Ethnicity, Nationality, Weight, mail us at [email protected]