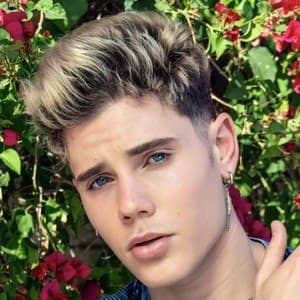 Nicky Champa is an American social media personality. He is famous for his TikTok account which has over 8.1 million followers as of early 2021.

How old is Nicky Champa?

Nicky Champa was born on 13th September 1995, in Dallas, Texas. As of 2020, his age is 25. Champa spent his childhood days in Manlius, New York, outside of Syracuse.

He was raised alongside his brother, Timmy by his single mother, Kelley Champa. Regarding his educational background, Champa attended New York University and considered studying acting but later dropped out and moved to Los Angeles.

How did Nicky Champa become so famous?

Nicky Champa became famous mainly through TikTok. He started uploading videos on TikTok and gained a considerable amount of followers in a short period of time.

Champa is also an actor and got his first big acting role in the music video for American rapper, Travis Scott’s song “Don’t Play”. Furthermore, he has also worked in ‘Deadlocked’, ‘Astrid Clover’, and ‘The Letter’. In the H&M x Moschino fashion show in 2018, he was dressed by Jeremy Scott and featured on the red carpet.

Is Nicky Champa dating anyone?

Nicky Champa is homosexual and came out a long time ago. Champa is proud about his sexuality. Currently, he is in a relationship with fellow TikTok star, Pierre Boo. The couple has been together since early 2017.

How tall is Nicky?

Champa stands a height of around 5 feet 8 inches and weighs around 65 kg. His eye color is blue and he has blonde hair.

What is the Net Worth of Nicky Champa?

As of 2020, Nicky Champa has an estimated net worth of around $400k according to various online sources. His main source of income seems to be social media and sponsorships as of now.

Our contents are created by fans, if you have any problems of Nicky Champa Net Worth, Salary, Relationship Status, Married Date, Age, Height, Ethnicity, Nationality, Weight, mail us at [email protected]