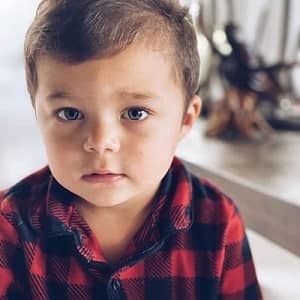 Ocean PenaVega is well known as the son of popular actor Carlos PenaVega and actress AlexaPenaVega. Ocean is also a young Instagram personality thanks to his incredible popularity and number of followers.

When was Ocean PenaVega born?

Ocean PenaVega, full name Ocean King PenaVega, was born on the 7th of December, 2016 in the U.S. As of 2020, his age is 4. His nationality is American and his ethnicity is mixed.

Talking about his parents Ocean is the son of actor Carlos PenaVega (father) and actress and former model, Alexa PenaVega (mother). Both of them are well-known figures in the movie industry with lots of supportive fans. Ocean also has a younger brother named Kingston.

Ocean is still pretty young and has not started going to school. But he will start his educational journey pretty soon, seeing as he is 4 years old.

How did Ocean PenaVega rise to fame?

Ocean was already very popular at the time of his birth thanks to the popularity of his parents. Even before he was born, fans of the couple had been anticipating his birth, from the day Alexa announced that she was pregnant. Many fans and stars of the film industry congratulated the couple and sent them lots of love when Oscar was finally born in 2016. The couple shared adorable photos of their newborn and these pictures made him even more popular.

Carlos and Alexa have also made an Instagram account for Ocean, which features his everyday life and shows how much he has grown over the years. The account is run by his parents, but it is Ocean’s cute photographs along with his parents that made the account popular.

As of now, Ocean’s Instagram account, 287k followers. This number is quite impressive, especially for someone as young as Ocean. The posts on this account are very wholesome and adorable and occasionally feature his brother and his parents as well. On top of Instagram popularity, Ocean has also acted in the TV Movie, Love at Sea and in a few shorts such as Carlos PenaVega: Besame and The Maui Sessions, to name a few. He also recently came in the news for being a part of the God Family of the cruise, Symphony of the Seas, which is the Royal Caribbean’s latest ship. Ocean is also part of the PenaVega family’s Youtube channel, LexLovesLos.

What is Ocean PenaVega’s net worth?

Ocean is too young to have his own net worth or earn an annual salary as of now.

What are Ocean PenaVega’s physical statistics?

Ocean is blessed with a healthy body along with blue eyes and brown hair. Neither he nor his family have revealed his exact height and weight as of now. Moreover, he is still in his growing stage and these figures are sure to change in the future.

Who is Ocean PenaVega dating?

Ocean PenaVega is still too young to be in a romantic relationship as of now. Of course he will probably have girlfriends and be in relationships in the future but that will be many years later.

Ocean is active and popular on social media. He is active on Instagram where he has over 287k followers as of now. But due to t his young age, his account is run by his parents.

Our contents are created by fans, if you have any problems of Ocean PenaVega Net Worth, Salary, Relationship Status, Married Date, Age, Height, Ethnicity, Nationality, Weight, mail us at [email protected]