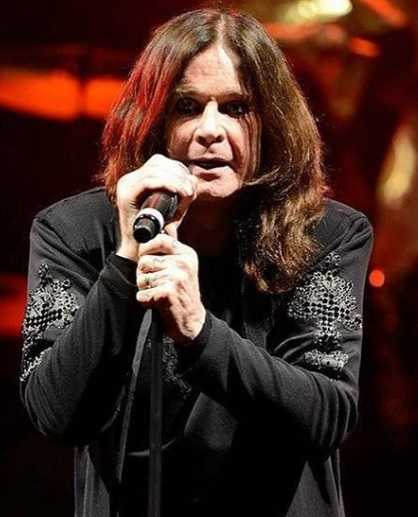 John Michael Osbourne, popularly known by the name Ozzy Osbourne is an English vocalist, songwriter, actor, and reality television star. He rose to prominence during the 1970s as the lead vocalist of the heavy metal band Black Sabbath. Later, he was fired by the band due to alcohol and drug problems. He is also known by the name “The Prince of Darkness”. After being fired from the band, he became successful in pursuing his solo career. As a solo artist, he has released eleven studio albums. He later rejoined the band, Black Sabbath to record the band’s final studio album, 13. For his contribution to heavy metal music, he is named “Godfather of Heavy Metal”. He became a reality television star in the early 2000s after appearing in the MTV reality show, The Osbournes.

The “Godfather of Heavy Metal” was hospitalized earlier on 6 February 2019 in an undisclosed location. He was hospitalized due to flu complications, severe upper-respiratory infection. His European leg of his “No More Tours 2” was postponed after his sudden illness.

He was reportedly moved to intensive care by 12 February 2019. He also has tour dates in Australia and New Zealand in March.

The 70-year old vocalist has received prayers from all around the world.

Ozzy Osbourne was born on 3 December 1948. His birth name is John Michael Osbourne. He was born to a father, John Thomas “Jack” Osbourne, and a mother, Liliam Osbourne. His birthplace is in Aston, Birmingham, England. He holds English nationality. His zodiac sign is Sagittarius. His father worked as a toolmaker at the General Electric Company, whereas his mother was a non-observant Catholic who worked days at a factory.

He had dyslexia at school. He also suffered from sexual abuse from school bullies at the age of 11. He used to take part in school plays.

He became a great fan of the Beatles at 14 after hearing their first single. He credits the band’s 1963 song “She Loves You” for inspiring him to become a musician. He left school at 15 and started working several jobs. He worked as a construction site labor, apprentice toolmaker, trainee plumber, car factory horn-tuner, an abattoir worker. He attempted to commit burglary and spent six weeks in Winson Green Prison. His father refused to pay the fine to teach him a lesson.

Geezer Butler formed a band, Rare Breed in late 1967. He recruited Osbourne as the vocalist. The band disbanded after they played two shows.

Osbourne and Butler reunited along with Tony Iommi Bill Ward to form a band, Earth.

They changed their band name to Black Sabbath based on the film of the same title in August 1969.

They later released their albums, Paranoid, and Master of Reality.

The band’s third studio album, Master of Reality received platinum certification and went Double Platinum in the early 21st century and was placed at number 298 on their 500 Greatest Albums of All Time list in 2003.

They released their fourth studio album, Volume 4 in September 1972. The album became fourth consecutive release to sell one million copies in the United States.

Their sixth studio album, Sabotage was released in July 1975. Rolling Stone stated Sabotage might be their best record ever.

They released their seventh studio album, Technical Ecstasy in September 1976.

Osbourne left the band for three months in 1978 to pursue his solo career. He took the break from the band to work in his solo project, Blizzard of Ozz.

He rejoined Black Sabbath upon the request of the other band members. They started working for their eighth studio album, Never Say Die!.

While working for their eighth studio album, they started falling into extreme drug problems. They released the album in 1978.

Conflicts between the members continued in 1979. Black Sabbath fired Osbourne in April 1979 stating he was unreliable and had excessive substance abuse issues as compared to the other band members. The band replaced him with the former Rainbow singer, Ronnie James Dio.

The original line of Black Sabbath reunited for a world tour and new album in 2011.

They played at the O2 Academy in their hometown, Birmingham. It was their first concert since their reunion.

The band began their farewell tour, “The End” in January 2016. They performed their final show at the Genting Arena in their home city of Birmingham.

Osbourne got 96,000 pounds for his share of the name from Black Sabbath. He spent three months doing coke and booze. He stated he thought it was his last party.

He signed with Jet Records. Don Arden attempted to convince him to form a supergroup.

He formed the Blizzard of Ozz in late 1979. Drummer Lee Kerslake, bassist-lyricist Bob Daisley, keyboardist Don Airey, and guitarist Randy Rhoads were other members of the band.

The band released their debut album as his solo album, Blizzard of Ozz.

He then released his second album, Diary of Madman.

As a solo artist, he went on to release 11 studio albums.

His biggest financial success of the 1990s was a venture named Ozzfest.

He has reunited with the original members of Sabbat in 1997 and has performed periodically with them since.

He announced his retirement from Ozzfest after Ozzfest 2005. However, he came back to headline the tour.

Tickets for the 2007 tour were offered to fans free of charge. It led to some controversy.

He and his wife Sharon starred in an MTV competition reality show, “Battle for Ozzfest” in 2005.

He helped judge the 2005 UK series of the X-Factor. His wife Sharon was one of the main judges there.

He became reality star after he was featured in The Osbournes along with his family members.

The Osbournes became one of MTV’s greatest hits and aired from March 2002 to March 2005.

They hosted the 30th Annual American Music Award in January 2003.

A documentary film about his life and career, “God Bless Ozzy Osbourne” was premiered in April 2011.

Ozzy along with the current members of Black Sabbath appeared in an episode of CSI: Crime Scene Investigation in May 2013.

He appeared in an episode of Gogglebox in November 2017.

His contribution to the music has earned him several recognitions.

He was inducted into the UK Music Hall of Fame in 2005.

In 2006, he was inducted into the US Rock and Roll Hall of Fame.

He was honored along with Genesis, Heart, and ZZ Top at the second annual VH1 Rock Honors in 2007.

A bronze star honoring him was placed on Broad Street in Birmingham in 2007.

He was crowned with the prestigious Living Legend award in the Classic Rock Roll of Honor Awards in 2008.

He won the “Literary Achievement” honor in 2010.

He received the Ivor Novello Award for Lifetime Achievement from the British Academy of Songwriters, Composers and Authors in London in 2015.

He had a tram named after him in his home city of Birmingham in 2016.

Are Sharon and Ozzy still married?

Ozzy Osbourne got married twice. He was first married to Thelma Riley. They met at a nightclub in Birmingham in 1971. They got married in 1971. They had a children Jessica and Louis. He also adopted her son Elliot.  They got divorced in 1982. He then married Sharon Levy in 1982. They first met around the release of their band, Black Sabbath’s debut album. Black Sabbath chose Don Arden as their new manager and Sharon was the daughter of Don Arden, working as his receptionist. He had 3 children with Sharon.

He lives in Buckinghamshire in England. While in the United States, he lives in Los Angeles, California.

In December 2003, he had an accident with his quad bike and was rushed into emergency surgery at Wexham Park Hospital in Slough. He broke his collar bone, eight ribs, and a neck vertebra.

Since the quad accident, He fully recovered and headlined the 2004 Ozzfest, in the reunited Black Sabbath. He had some short-term memory problems.

He has over 15 tattoos on his body. His first tattoo, O-Z-Z-Y was created by himself as a teenager with a sewing needle and pencil lead.

How much money does Ozzy have?

His total album sales with Black Sabbath and his solo work is over 100 million. His venture Ozzfest has grossed over $100 million since its beginning. He became the first hard rock and a heavy metal star to hit $50 million in merchandise sales. He has also appeared in tv commercials. He was also featured in the music video game Guitar Hero World Tour as a playable character. He and his wife are one of the UK’s richest couples ranking at number 458 in 2005. Their estimated earnings from recording, touring, and TV shows were 100 million pounds in 2005. As of 2019, his net worth is estimated at $220 million.

Our contents are created by fans, if you have any problems of Ozzy Osbourne Net Worth, Salary, Relationship Status, Married Date, Age, Height, Ethnicity, Nationality, Weight, mail us at [email protected]