Patrick Dennis Bowlen, popularly known as Pat Bowlen was the majority owner of the Denver Broncos of the National Football League (NFL). 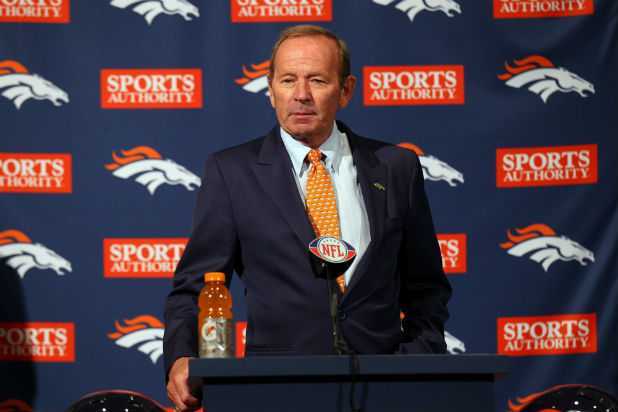 Patrick Dennis Bowlen, popularly known as Pat Bowlen was the majority owner of the Denver Broncos of the National Football League (NFL). He started serving as the CEO of the Broncos after he bought the club in 1984. He stepped down as the CEO of the Broncos in July 2014 due to the onset and progression of Alzheimer’s disease. Bowlen died on 13 June 2019 due to the complication of Alzheimer’s disease. He died at the age of 75.

What is Pat Bowlen Famous For?

Majority owner of the Denver Broncos since 1984.

Where was Pat Bowlen Born?

Pat Bowlen was born on 18 February 1944. His birth name was Patrick Dennis Bowlen. He was born to a father Paul Dennis Bowlen, and a mother, Arvella Bowlen. His birthplace was in Prairie du Chien, Wisconsin in the United States. He held American nationality. He is Catholic. His father became a millionaire in the Canadian oil business and founded Regent Drilling as a wildcatter. His brother John owns the company at present.

He attended Campion High School. After high school, he earned his degree in business from the University of Oklahoma in 1965. He earned a law degree from Oklahoma in 1968.

Bowlen became one of the successful and wealthy lawyers in Edmonton, Alberta.

He was a member of the bar association and law society in Alberta, Canada.

He also worked as an executive for his father’s company.

He also worked as a real estate developer.

He also had major investments in the mining industry.

He was an initiated member of the Pi Kappa Alpha International Fraternity.

He was initiated by the University of Oklahoma, Beta Omicron chapter in 1963.

He was one of the largest donors to the University of Denver.

The Bowlen Family including his two brothers John Bowlen and Bill Bowlen and sister Marybeth Bowlen purchased the team from Edgar Kaiser in 1984.

Despite the purchase of the majority of the Broncos, he faced several legal battles against Edgar Kaiser.

By late 2009, rumors had begun to emerge that Bowlen had stepped out of the spotlight because of short-term memory loss.

He no longer played a major role in the team’s decision making starting in 2010.

He stepped down as the team’s CEO due to complications with Alzheimer’s disease.

He relinquished control of the team of Joe Ellis.

He was also the principal owner of Denver Outlaws and minority owner of Colorado Crush.

ArenaBowl XIX champion (as part-owner of the Colorado Crush)

Inducted to the Pro Football Hall of Fame (Class of 2019)

Bowlen died on 13 June 2019 due to complications of Alzheimer’s disease. He died at the age of 75.

Who was Pat Bowlen Married To?

Pat Bowlen was a married man. He was married to Annabel Bowlen. They had 7 children together, Amie, Beth, Patrick, Johnny, Britany, Annabel, and Christina.

What was Pat Bowlen Net Worth?

Pat Bowlen earned his fortune working as a lawyer. Later he invested in the real estate and the mining industry. He became the major owner of the Denver Broncos in 1984. He had earned quite a fortune. His net worth was estimated at $1 billion.

Our contents are created by fans, if you have any problems of Pat Bowlen Net Worth, Salary, Relationship Status, Married Date, Age, Height, Ethnicity, Nationality, Weight, mail us at [email protected]