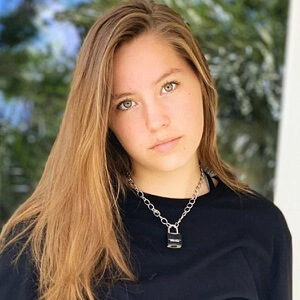 Peyton Coffee is a famous TikTok star and social media personality. She is very popular for posting lip-sync videos on the popular video-sharing app TikTok, where she has garnered over millions of fans. Besides her own account, she is also featured on her father’s channel along with her siblings.

What is Peyton Coffee’s age?

Peyton Coffee was born on January 28, 2004, in California, United States. She is American by nationality, white by ethnicity, and her zodiac sign is Aquarius. As of 2020, her age is 16.  Peyton was born to parents Jason Coffee (father) and Chassy Coffee(mother).

After Peyton’s birth, the family had moved to Kansas City, Missouri. Thus she spent her early childhood there. Later on, the family moved to Hawaii and fell in love with the place. Besides her mother, everybody in her family is a social media influencer. Her father is a famous Viner who has featured her mother in most of his videos as well.

Educationally speaking, Peyton attends a local high school along with her siblings. From various media sources, she in her higher classes and will very soon graduate from her high school.

Peyton’s Rise to Fame and her Career

Earlier days, Peyton Coffee was introduced to social media at a young age by her father. She started making appearances on her father’s Vine videos which eventually increased her popularity. She decided to follow in her father’s footsteps when her friends prompted her to emulate her father. Peyton initially had created a Vine account and started posting videos that had attracted a lot of viewers. Her popularity increased when her Vine account started gathering hundreds of followers.

Later she started creating lip-sync videos and uploading them on her TikTok account.  On December 16, 2018, Peyton became one of the youngest TikTokers in Hawaii to have more than a million followers on the app. She even has a self-entitled YouTube channel, but she is not seen quite active on the channel. However, she appears frequently on her father’s YouTube channel which has thousands of views and subscribers.

Peyton is also famous for appearing in funny videos on her father’s TikTok account, ‘jasoncoffee’ which has accumulated millions of fans.

What is Peyton Coffee’s net worth?

As of the year 2020, Peyton Coffee has an estimated net worth of around $400 thousand. As a famous social media personality and from a well popular family, she must have earned a huge sum of money from brand endorsements and paid promotions on her accounts.

Is Peyton Coffee dating anyone?

Peyton Coffee seems to be single currently and has no boyfriend. She has not disclosed any of her romantic relationship histories either. She is young and currently focuses to explore more in her career. Peyton also has maintained applaudable professionalism to avoid anything which could spark rumors and controversies.

As an emerging celebrity, Peyton seems to have maintained a very slim and athletic body. She stands at a decent height of 5′ 7″ and weighs about 52 kgs. She has a pair of beautiful hazel eyes and light brown hair. Information regarding her other body measurements is still not disclosed to the media.

Peyton Coffee is very active on several social media platforms. She is active mostly on her TikTok account that has amassed over 12.5 million followers and 554.2 million hearts. She is also available on Twitter but not on Facebook. She has her own YouTube channel where she uploads DIY and other craft videos, she is equally featured in her dad’s famous YouTube channel.

Our contents are created by fans, if you have any problems of Peyton Coffee Net Worth, Salary, Relationship Status, Married Date, Age, Height, Ethnicity, Nationality, Weight, mail us at [email protected]