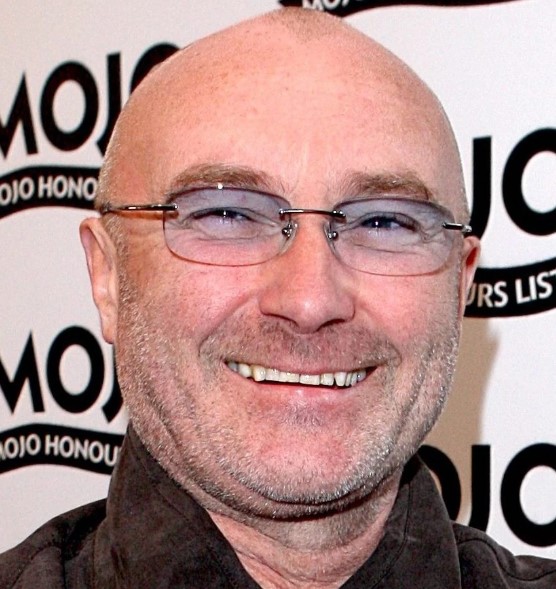 Phil Collins is an English singer, songwriter, record producer, drummer, and actor who is best known as the member of the former rock band “Genesis”. In the late 1980s, when his all work was totaled, he had more US Top 40 singles than any other artist. He has also been recognized by music publications with induction into the Modern Drummer Hall of Fame in 2012.

Some of his top singles are “In the air tonight”, “One more night”, “Another Day in Paradise”, and “A groovy kind of love”. Having sold about 33 million copies of records, across eight albums with over $550 million earnings worldwide, Collins is certainly one of the best-selling artists of this generation.

Collins’ one of the successful solo careers includes writing songs for Disney’s “Tarzan”(1999) for which he received an Oscar for Best Original Song for “You’ll Be in My Heart”. Throughout career till 2020, Collins has 8 Grammy Awards, 6 Brit Awards, 6 Ivor Novello Awards, 2 Golden Globe Awards, 1 Academy Award, and a Disney Legend Award.

He received a star on the Hollywood Walk of Fame in 1999 and was inducted into the Songwriters Hall of Fame in 2003 and the Rock and Roll Hall of Fame as a member of Genesis in 2010. On August 7, 2020, a pair of twin brothers went viral after capturing their brilliant reaction to the moment they listened to Phil Collins for the first time.

What is Philip Collins famous for?

Where was Philip Collins born?

Philip Collins was born on January 30, 1951, in Chiswick, Middlesex, England. His birth name is Philip David Charles Collins. British is his nationality. His ethnicity is White Caucasian while Aquarius is his zodiac sign.

Philip was born as the second son of Greville Philip Austin Collins(father) and Winifred June Collins(mother). His father, Greville was an insurance agent while his mother, Winifred was a theatrical agent. He grew up along with his older brother, Clive who is a noted cartoonist and his sister, Carole who is a former professional ice skater.

Philip used to accompany his mother, Winifred to theaters and watch actors perform on stage which inspired him and led to an increased interest in the performing arts.

Collins was given a toy drum kit for Christmas when he was five, practicing which he spent hours growing up. He later got more complete sets by his parents which he practiced by playing along to music on the television and radio. Collins studied drum rudiments as a teenager, first learning basic rudiments under Lloyd Ryan and later studying further under Frank King.

His professional training in acting and singing began at the tender age of 14 in Barbara Speake Stage School. His first major role arrived in 1964 as the Artful Dodger in two West End runs of the musical, “Oliver!”.

Phil attended high school at the Chiswick County School for Boys, where he started a band of his own, named “Real Thing”. After it was disbanded, he joined Freehold, with which he wrote his first song, “Lying Crying Dying”.

Despite the beginnings of an acting career, Collins never intended to pursue it professionally and gravitated towards music as he later formed a rock band named “Flaming Youth” in the late 1960s.

Who is Philip Collins’s Wife and Children?

Philip Collins has been married and divorced three times. Collins was first married to Canadian-born Andrea Bertorelli, with whom he met when he was just 11, in a London drama class, and reconnected when Genesis performed in Vancouver. They got married in 1975 in England when they both were 24 but their relationship lasted only 5 years till 1980.

Before they got married, Collins adopted Bertorelli’s daughter Joely(b. 1972), who is an actress and film producer. They together had a son named Simon Collins born in 1976, who is the former vocalist and drummer of the progressive rock band Sound of Contact. Soon after Collins’s autobiography was released, Bertorelli took legal action against Collins pertaining to his account of their relationship in his autobiography.

Collins got married to his second wife, American Jill Tavelman in 1984. They together have a daughter named Lily Collins(b.1989) who is a popular actress, model, and actress. His second marriage wasn’t a smooth marriage, as he was found having affair while touring with Genesis in 1992 with Lavinia Lang, a former drama school classmate. They even were engaged before but their relationship ended.

After 10 years of their marriage, Collins stated that he had fallen out of love with Tavelman and had filed for divorce, which finalized in 1996 with a settlement of 17 million euros.

His third wife was Orianne Cevey, a Swiss national whom he met on tour and who worked as his translator. They got married in 1999 and have two sons, Nicholas(b. 2001) and Matthew(b. 2004). They lived in the former house of Jackie Stewart in Begnins, Switzerland. They got divorced in 2008 where Collins paid 25 million euros to Cevey, which became the largest settlement in a British celebrity divorce.

Besides, Collins was in a relationship with American news anchor Dana Tyler in 2007. They dated for over 9 years till 2016. In 2015, after Collins moved to Miami Beach, he became closer to his youngest songs and got reunited with Cevey and they were living together in his Miami home.

What is the net worth of Philip Collins?

Philip Collins, the legendary drummer, and singer have quite great earnings from his professional career as a drummer and as the singer of the Genesis band. Having started his career since the 1960s, Collins has come a long way passing decades and decades with his marvelous albums and songs for over 55 years now.

Being regarded as the second wealthiest drummer in the world, only surpassed by Ringo Starr(drummer of “The Beatles”), Collins has undoubtedly a multi-million worth property. Collins was estimated to have a fortune of £120 million in the Sunday Times Rich List of 2018, making him one of the 25 wealthiest people in the British music industry.

Currently, Collins has an estimated net worth of around $260 million and has sold more than 100 million albums worldwide as a solo artist. With his 3 marriages and 3 divorces, Collins has to spend millions of dollars as with his second divorce with Jill Tavelman he gave a 17 million euro as a settlement while his third divorce settlement was 25 million euros with Orianne Cevey. His latter settlement became the largest settlement in a British celebrity divorce.

He resides in his million worth house that he has one in Fechy, Switzerland, another in New York City and Dersingham, Norfolk as well.

How tall is Philip Collins?

The legendary drummer, Philip Collins is a good looking man who still has the charming personality as in his 20s even in his late 60s. He stands tall with a height of 1.68 m while his body weighs around 68kg. He has a fair complexion with blue eyes and bald hair.

Collins had several health issues as in 2000, he developed sudden hearing loss in his left ear, even went surgery to repair dislocated vertebrae in his upper neck in 2009, and even alluded to feelings of depression and low self-esteem in recent years and revealed he had contemplated suicide, but he resisted for the sake of his children in 2010.

He also stated that he had been sober for 3 years after he struggled with an alcohol problem following his retirement and divorce. In 2017, Collins developed a type 2 diabetic and had received treatment with a hyperbaric chamber by 2018,  Collins began to use a cane to assist with walking and performs on stage while sitting in a chair.

Our contents are created by fans, if you have any problems of Phil Collins Net Worth, Salary, Relationship Status, Married Date, Age, Height, Ethnicity, Nationality, Weight, mail us at [email protected]