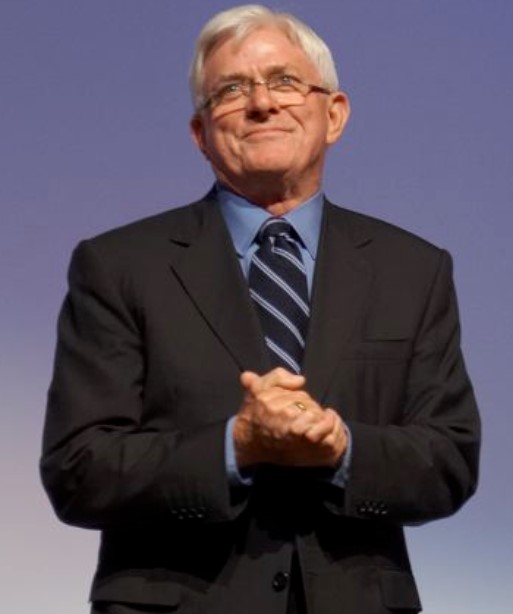 Phil Donahue is an American media personality, writer, film producer, and host who is widely recognized as the creator and host of television talk show, “The Phil Donahue Show” which ran for 29 years long. The show, later known as Donahue, was the first talk show format that included audience participation in history.

Donahue is considered one of the most influential talk show hosts and has been called also as the “King of Daytime Talk”. He is also known as the husband of popular actress and writer, Marlo Thomas with whom he celebrates his 40th wedding anniversary this year 2020. In his 6 decades-long careers he became able to win 20 Emmy Awards.

What is Phil Donahue Famous for?

Where was Phil Donahue Born?

Phil Donahue was born on December 21, 1935, in Cleveland, Ohio, United States. His birth name is Phillip John Donahue. His nationality is American. Donahue belongs to Irish Catholic ethnicity while Sagittarius is her zodiac sign.

Donahue was born into a middle-class, churchgoing, Irish Catholic family to Phillip Donahue(father) and Catherine(mother). His father, Philip was a furniture sales clerk while his mother, Catherine, was a department store shoe clerk. However, his parents divorced soon. He grew up in his hometown along with his siblings.

After then, he began working as a production assistant at KYW radio and television as well until he got a chance to become an announcer.

During his 6 decades-long careers, he became able to conquer a number of awards and honors which can be enlisted as:

Who is Phil Donahue Married to?

Phil Donahue has married twice in his entire life to date. Donahue’s first marriage was with Margaret Cooney, with whom he got married in 1958. The couple together shared five children: Michael, Kevin, Daniel, Mary Rose, and James, however, their relation didn’t last long as they got a divorce after 17 years long marriage in 1975.

Donahue then met his future wife, a popular actress, and writer, Marlo Thomas in 1977, while she appeared as a guest on his television talk show, “Donahue”.

Thomas fell in love at first sight with Phil, who was a divorcee at the time. After they dated for 3 years, they got married on May 21, 1980, in a beautiful wedding. They decided their marriage date as per their birth date as Marlo’s was November 21 and Phil’s was December 21 so specifically on 5/21.

The couple is celebrating their 40th wedding anniversary this month, May 2020 in the ongoing pandemic of COVID-19.

Besides, Phil Donahue is a devoted philanthropist who supports many charitable organizations, most notably Peace Alliance and St. Jude Children’s Research Hospital.

How Tall is Phil Donahue?

Phil Donahue is a good looking man in his 80s. Even though Donahue is in his 80s, he has managed to remain quite fit and healthy just like his wife, Marlo. He stands tall with a height of 1.83 m while his body weighs around 75kg.

He has a fair complexion with grey hair and green eyes.

What is the Net Worth of Phil Donahue?

Phil Donahue has great earnings from his successful career as a media personality and host. Working for the long-term show, “The Phil Donahue Show” for over 26 years, he has easily managed to amass a million worth fortune from his success. His current estimate net worth is around $25 million.

Besides, his wife, Marlo Thomas, being herself a great personality also has a whopping net worth of around $35 million.

Our contents are created by fans, if you have any problems of Phil Donahue Net Worth, Salary, Relationship Status, Married Date, Age, Height, Ethnicity, Nationality, Weight, mail us at [email protected]