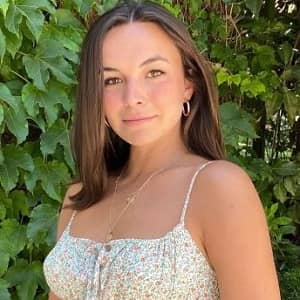 Pierson Wodzynski is an American social media personality. She rose to prominence with her self-titled TikTok account. Her funny character-based comedy sketches have helped her gain over 5.3 million followers on TikTok. Moreover, she also has over 808k subscribers on her Youtube channel.

How old is Pierson Wodzynski?

Pierson Wodzynski was born on February 18, 1999, in the United States of America. As of 2020, her age is 21. She has not revealed much about her father but her mother’s name is Karin Wodzynski. She also has a younger brother named Logan who features on her pictures and videos.

Her ethnicity is Caucasian.

Regarding her educational background, she attended both the University of California, Santa Barbara and El Camino College.

How did Pierson Wodzynski become so famous?

Pierson Wodzynski rose into fame and limelight for her videos on TikTok. She uploads dance videos, lip-syncs to trending songs and voice-over, short comedy videos, etc on her self-titled TikTok account. Moreover, she uploads longer content including challenges, vlogs, pranks, etc. In March 2020, she was included in the Amp Studios team which also involves other huge social media personalities such as Brent Rivera, Lexi Riviera, the Stokes twins, and Ben Azelart.

Initially, she had started uploading videos on TikTok for fun but later her videos started getting a lot of views and she became viral within no time. As of August 2020, her TikTok account has over 5.3 million followers and her videos have garnered over 130 million likes.

In 2014, Pierson started her Youtube channel. However, she posted her first video in March 2019 titled ‘WHISPER CHALLENGE: Feat. Madi & Kylie’. In just over a year, she has gained hundreds of thousands of subscribers with her interesting videos, and now her videos earn millions of views. She mainly uploads challenges, vlogs, pranks, etc. on her channel.

Her most popular video to date is titled ‘DUCT TAPED TO BRENT RIVERA FOR A DAY’ which has over 4.5 million views. Some of her popular videos are ‘LEXI RIVIERA, LEXI HENSLER & THE BOYS’, ‘SURPRISING MY FRIENDS WITH MY BOYFRIEND’, ‘Trying Things We’ve NEVER Done Before w/ Brent Rivera’, ‘SETTING BRENT UP WITH NEW GIRL’, etc.

As of August 2020, her channel already has over 808k subscribers after just over a year of activity. Moreover, her videos have crossed 32 million views.

What is the Net Worth of Pierson Wodzynski?

Pierson Wodzynski has an estimated net worth of around $200k as of 2020. With an average of 250k views per day from different sources, her Youtube channel generates an estimated revenue of $1,200 per day which makes over $440,000 a year from the ads in her videos.

How tall is Pierson?

Wodzynski stands at a height of 5 feet 7 inches and weighs around 50 kg. Her body measurements for breasts, waist, and hips are 34-26-37 inches. She wears a bra size of 32 C and her shoe size is 7 US. Her eye color and hair color both are brown.

Is Pierson Wodzynski dating anyone?

Pierson does seem to be single at the moment. However, she is very close to her fellow social media personality, Brent Riviera and many fans have assumed they are dating. However, this does not seem to be the case as none of them have confirmed the rumor. As of now, they seem to be close friends only.

Pierson Wodzynski is active and very popular on social media. She has over 0.6k followers on Twitter. Her Instagram account has more than 797k followers. Similarly, her TikTok has over 5.3 million followers.

Our contents are created by fans, if you have any problems of Pierson Wodzynski Net Worth, Salary, Relationship Status, Married Date, Age, Height, Ethnicity, Nationality, Weight, mail us at [email protected]