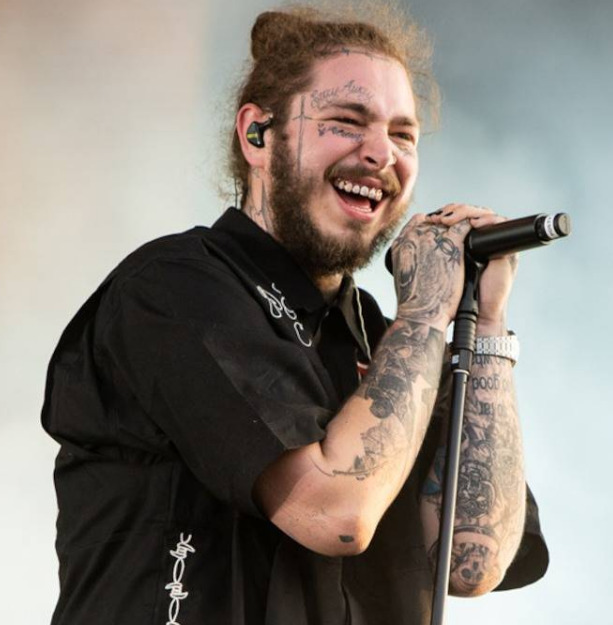 Austin Richard Post is an American rapper, singer, songwriter and record producer. He is professionally known as Post Malone. His style and contributions to the medium have him credited with innovating hip-hop. He also gained critical acclaim for blending various musical genres, introspective songwriting, and laconic vocal range.

Post explained how Justin Bieber ruined his first tattoo and previewed a snippet of a new song on The Tonight Show Monday. He previews’ his new Spiderman Song titled ‘Sunflower’ on Fallon. This song will be appearing in the upcoming animated film ‘Spider-Man: Into the Spider-Verse’.  In the interview, he also discussed his early attempts at music which included a lot of guitar hero and learning Metallic covers. He also mentioned his upcoming festival, Posty Fest, and the unique way he celebrates every career success: A meal at the Olive Garden.

Post Malone was born on 4 July 1995 at Syracuse, New York. He was born to Rich Post. He was raised by his stepmother Jodie Post. He was raised in Grapevine, Texas. In 2010, he began to play the guitar and auditioned for the band Crown the Empire, but was rejected after his guitar strings broke during the audition. He attended Grapevine High School. He was voted “Most Likely to Become Famous” by his classmates as a senior in high school. He worked at a Chicken Express as a teenager. He enrolled in Tarrant County College but dropped out.

Post’s height is 1.84 m and weight is 84 kg. His color of the eye is blue and hair color is dark brown. He has gold grilled teeth. He has various tattoos in his body. Especially he has face tattoos. Overall, he has the balanced and healthy body.

Post and several other producers and artists formed the music group BLCKVRD and recorded music together. They produced several tracks including ‘White Iverson’. In February 2015, upon completion, it was uploaded to Post’s SoundCloud account. On July 19, 2015, Post released a music video for “White Iverson”. In 2015, he signed a recording contract with Republic Records. He performed at Kylie Jenner’s 18th birthday party. At the party, Kanye West enjoyed his music, leading to him collaborating with Post on his single “Fade” from his album The Life of Pablo.

In 2016, he premiered his new single, “Go Flex” on Zane Lowe’s Beats 1 show. On May 12, he released his first full-length project which was a mixtape titled ‘August 26’. On June 9, he made his national television debut on Jimmy Kimmel Live, performing “Go Flex”. He was considered for XXL’s “2016 Freshmen Class” magazine cover. In December, he released his first album titled ‘Stoney’. It was certified triple platinum. The album later being certified double platinum by the RIAA in October 2017.

In September 2017, he released his first single from the album ‘Rockstar’. The song peaked to number 1 on Billboard 100. In November, he released an official music video for ‘Rockstar’.

On 20 February 2018, he previewed his new song titled ‘Psycho’. He released his second album titled ‘Beerbongs & Bentleys’ it broke many streaming records. It was certified double platinum. During his appearance on The Tonight Show Starring Jimmy Fallon, he previewed his song “Sunflower” from the upcoming soundtrack to the film Spider-Man: Into the Spider-Verse.

In 2015, it was reported that he was in relation with a woman named Ashlen. She booked him for a show in the nightclub. They got controversies and got broke. But later they were together again in 2016. But thereafter their pictures were not seen. It seems that they have again got separated.

Our contents are created by fans, if you have any problems of Post Malone Net Worth, Salary, Relationship Status, Married Date, Age, Height, Ethnicity, Nationality, Weight, mail us at [email protected]