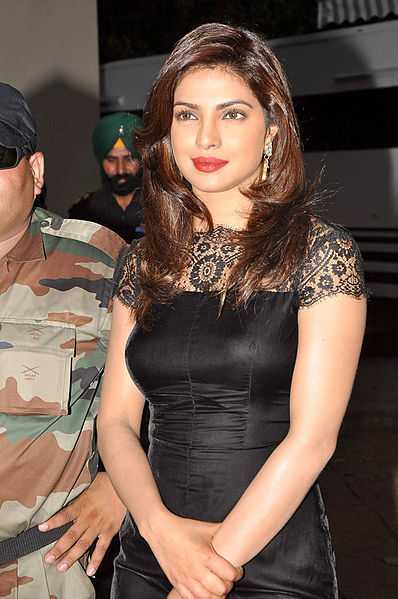 After being crowned with the Miss World beauty pageant, Priyanka Chopra had followed the precedent set by joining the Indian movie industry. By now, she is known as the ubiquitous persona in the entertainment industry. Her superstardom has been accompanied by her work in both films and music.

Priyanka was born in the military family of Jamshedpur, Bihar in India on 18th July 1982. Daughter of Madhu and Ashok Chopra, she had a younger sibling named Siddharth. Because of her father’s military profession, her family relocated to different places of India like Pune, Delhi, Bareilly, Ladakh, Ambala, Lucknow, and Chandigarh during her childhood days. So, she had attended a number of schools including La Martiniere Girls School and St. Maria Goretti College. Traveling through the various places while up, brought a positive impact on the little girl as she came to know the multi-cultural society of the country. In her early teens, moving to the US for further study, she stayed with her aunt but her study was affected due to the frequent moves of her aunt’s family. There, she took classes for western classical music, Kathak dance, and choral singing.

Returning to India after a few years of stay in the US, her interests in fashion had driven her to take part in beauty contests. Subsequently winning the beauty pageant ‘May Queen’, she was admired by many people. Thereafter, her mother supported her to enter Femina Miss India (2000), where she placed herself in 2nd position. Then enthusiastically, she went being India’s representative to Miss World contest and finally became the fifth Indian to win the title. The beauty pageant win led her to score film roles and she made her film debut landing the female lead in the 2002 romantic thriller Humraaz. The film release was delayed due to various conflicts for her schedule and the 2002 Tamil movie Thamizhan came to be screen debut for her. Starring along with Preity Zinta and Sunny Deol in the movie The Hero: Love Story of Spy, she had made her Bollywood debut in 2003. The movie became the highest-grossing movie of the year garnered many positive responses on Chopra’s credits. Her recognition became widespread after she played a female lead in the box-office hit movie Andaaz. The movie introduced all the qualities of Chopra that the film-star must have and led her to further roles. Her next three releases Plan, Asambhav, and Kismat were poorly received in the box-office. However, the highly-watched romantic comedy Mujhse Shaadi Karogi restored her fame and continued the rapid build-up of her career with the Bollywood blockbusters like Aitraaz, Barsaat, Krrish, Aap Ki Khatir, Don, Salaam-e-Ishq: A Tribute to Love, etc. After then, she passed through the string of several poorly received movies and came to revitalize her presence in limelight with the movie Fashion, Dostana, Pyar Impossible, Don 2, Agneepath, Teri Meri Kahaani, Barfi! , Deewana Main Deewana, Krish 3, Sunday, Mary Kom, and so on. The shining Bollywood star has a lot more to do for the promotion of the Indian movie industry.

Apart from the movie, she has also established herself as an international musical artist. She has revealed that her father had influenced her to music. She had first recorded a song for the Tamil movie Thamizhan. She became the first Indian entertainer to sign with Creative Artists Agency in Los Angeles. She had come out with her first single In My City in 2012, which brought a positive response from her fans and earned extensive sales of 130,000 copies throughout India. The triple platinum-certified song explored the level of her singing talents that the music industry is searching for. Her next single Exotic brought her to international stardom which was followed by the third single I Can t Make You Love Me. Lending her impressive vocal to John Lemon s song Imagine, she had supported the global campaign of UNICEF. Throughout her career, the Indian super-star has earned a net worth of $11 million.

Regarding the personal life and relationship, Chopra has been found quite confidential. She and Kaminey co-star, Shahid Kapoor was reportedly close during the set of the movie. Two of them had t revealed any statement regarding the reports. So, the couple s connection was subjected to speculations during the 2010s. no further claims have come regarding her personal life matters including affair, boyfriend, marriage, and many more as she has been found loving her career works taking both kinds of music and acting under her wings.

In addition to appearing in big-screened movies, she also makes appearances in various stage shows. In regard to her humanitarian deeds, she had served as UNICEF Goodwill Ambassador for Child Rights in 2010 and is still active in the various campaigns of UNICEF. More details about this influencing actress can be pulled out from the wiki.

Our contents are created by fans, if you have any problems of Priyanka Chopra Net Worth, Salary, Relationship Status, Married Date, Age, Height, Ethnicity, Nationality, Weight, mail us at [email protected]