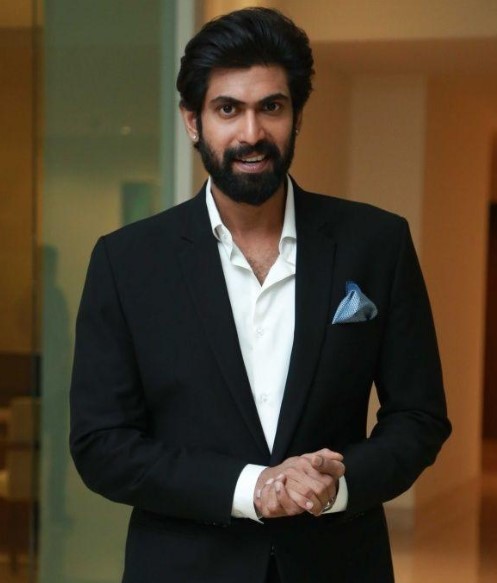 Rana Daggubati is an Indian actor, producer, television personality, visual effects co-ordinator, and an entrepreneur who is known primarily for his work in Telugu, Hindi and Tamil films. Rana is widely recognized for his main antagonist role of Bhallaladeva in one of the highest-grossing blockbuster movies, “Baahubali: The Beginning”(2015).

Daggubati has established himself as one of the leading actors in Telugu cinema, with his variety of roles in several movies, and is also described as one of the few actors in India who were able to achieve pan-Indian appeal. He also has won several awards including IIFA Award, Zee Cine Award, SIIMA Award, Nandi Award, and National Film Award.

Rana is quite active and popular in social media sites with over 3.5 million followers on his Instagram account: @ranadaggubati. On May 12, 2020, he got engaged to his long-term girlfriend, Miheeka Bajaj.

What is Rana Daggubati Famous for?

Where was Rana Daggubati Born?

Rana Daggubati was born on December 14, 1984, in Chennai, Tamil Nadu, India. His birth name is Ramanaidu Daggubati. His nationality is Indian. Saggitarius is his zodiac sign.

Rana was born in Daggubati-Akkineni family as the eldest son of Daggubati Suresh Babu(father) and Lakshmi Daggubati(mother). His father, Suresh, is a popular Telugu film producer and managing director of “Suresh Productions” while his mother, Lakshmi is a house-wife.

Rana belongs to a filmy background as his paternal grandfather, Daggubati Ramanaidu was the prominent head of the popular “The Daggubati-Akkineni Family” and even has a place in the “Guinness Book of World Records” for most films produced by an individual with over 150 films in 13 Indian languages. His paternal uncle, Venkatesh Daggubati, and his cousin Naga Chaitanya are also actors in the film industry.

Rana grew up in his hometown in a well-protected environment as a celebrity kid along with his younger siblings: a brother, Abhiram Daggubat, and a sister, Malavika Devi Daggubati. He attended Hyderabad Public School and then got transferred to Chettinad Vidyashram. Besides, he is blind in his right eye and he has a transplanted left eye, which he revealed in 2016. When he was 14, he had his right surgery however, it was unsuccessful.

Rana Daggubati’s Career as an Actor

Who is Rana Daggubati Engaged to?

They had been seeing each other for a long time and on May 12, 2020, they got engaged as announced by Rana himself announced about their engagement on his Instagram with an adorable selfie together and a caption, “And she said Yes”. After the quarantine is over, the couple is planning to get married soon.

Rana had dated previously beautiful actress, Trisha Krishna. Besides, Rana enjoys cooking, diving, boxing, and photography. Back in February 2013, he had a feud with another popular actor, Vikram, after Vikram gave a statement related to his profession which kickstarted the issue in the whole media, however, they handled the situation in a gentle way later.

What is the Net Worth of Rana Daggubati?

Rana Daggubati has great earnings from his professional career as an actor. Working in this field for over a decade, he has easily managed to amass a million worth fortune from his several movies, cameo appearance, TV shows, and endorsements. From a Telugus star having turned to a pan Indian actor, Daggubati has undoubtedly earned a million fortune with millions of hearts all over India.

His current estimated net worth is around Rs. 142 Crore while his annual salary per movie is around Rs. 6 Crore. Besides, belonging to an already rich family, “The Daggubati-Akkineni Family”, Rana has been living a lavish and luxurious lifestyle since his childhood and already has a million worth fortune on his account.

He has his Hyderabad house worth Rs. 4.8 crore, his Rs. 2.73 crore worth Mercedes Benz S-Class, and Rs. 1.32 crore worth BMW 7 series. He also wears extremely expensive products including Rs. 3.25 lakh worth TAGHeuer Grand Prix and Rs. 8.16 lakh worth Hublot Mexican.

How Tall is Rana Daggubati?

Rana Daggubati is a chocolaty handsome man in his 30s. he has a well maintained masculine athletic body physique with 46 inches chest, 35 inches waist, and 18 inches biceps. He stands tall with a height of 6ft. 2inch.(1.88m) while his body weighs around 102kg(225 lbs). He has brown complexion with dark brown eyes and black hair.

Our contents are created by fans, if you have any problems of Rana Daggubati Net Worth, Salary, Relationship Status, Married Date, Age, Height, Ethnicity, Nationality, Weight, mail us at [email protected]