Regina King is an American actress and television director 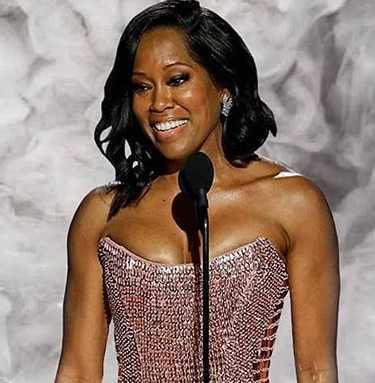 The 43-years old actress and television director, Regina King made the headline when she came upon the stage for her acceptance speech at the 76th edition of the Golden Globe Awards ceremony held in The Beverly Hills, California on 6 January 2019. She won the Best Supporting Actress for her role in ‘If Beale Street Could Talk’.

In her acceptance speech, she ensured that all the projects she produces in the coming years will be staffed by 50 percent of women.

Regina King was born on 15 January 1971. Her birth name is Regina Rene King. She was born to Thomas Windsor Sr., father, and Gloria, mother. She has a younger sister named Reina King. Her parents got divorced in 1979. She was born in Los Angeles, California in the United States. She holds an American nationality and her ethnicity is black. Her zodiac sign is Capricorn. She grew up in View Park-Windsor Hills. She attended Westchester High School. After graduating from high school in 1988, she attended the University of Southern California. She took acting classes with Betty A. Bridges, who mentored her for 10 years.

The career of Regina King

In 1985, Regina King began her acting career. She played the role of Brenda Jenkins in the television series 227. The show ended in 1990.

Other television series and television films she has worked in are Northern Exposure, New York Undercover, Living Single, Where the Truth Lies, If These Walls Could Talk 2, Leap of Faith, Damaged Care, The Boondocks, Women in Law, 24, Living Proof, Southland, RuPaul’s Drag Race, The Big Bang Theory, The Strain, Shameless, American Crime, The Leftovers, Seven Seconds and Watchmen.

From 1991 to 1999, she has later appeared in several films including Poetic Justice, Higher Learning, Friday, A Thin Line Between Love and Hate, Jerry Maguire, How Stella Got Her Groove Back, Enemy of the State Mighty Joe Young, and Love and Action in Chicago.

From 2001 to 2018, she has appeared in numerous films including  Down to Earth, Truth Be Told, Daddy Day Care, Legally Blonde 2: Red, White & Blonde, A Cinderella Story, Ray, Miss Congeniality 2: Armed and Fabulous, Year of the Dog, This Christmas, Our Family Wedding, and If Beale Street Could Talk.

She started her television director career in 2013 as she directed an episode of Southland.

She has later directed a few episodes of Being Mary Jane, Scandal, The Catch, Animal Kingdom, Greenleaf, Pitch, This is Us, Shameless, The Good Doctor, and Insecure.

She has also worked in the tv commercials for Procter & Gamble, Beauty with Benefits advert for QVC, and Always.

Awards and nominations of Regina King

BET Best Actress Awards for her work in A Cinderella Story and Miss Congeniality 2: Armed and Fabolous.

2 NAACP Image Outstanding Actress in a Drama Series Award for her work in Southland.

Primetime Emmy Outstanding Lead Actress in a Limited Series or Movie Award for her role in Seven Seconds.

Regina King is reportedly single. Previously, she was married from 1997 to 2007. She tied a knot with her husband, Ian Alexander Sr. in 1997. They got divorced in 2007. She has one child, a son, Ian Alexander Jr. with her previous husband.

She later dated actor Malcolm-Jamal Warner in 2011. Their affair ended in 2013.

Net Worth of Regina King

The 43-year old actress and television director has earned her fortune working in films and television. As of 2019, her net worth is estimated at around $12 million.

Our contents are created by fans, if you have any problems of Regina King Net Worth, Salary, Relationship Status, Married Date, Age, Height, Ethnicity, Nationality, Weight, mail us at [email protected]