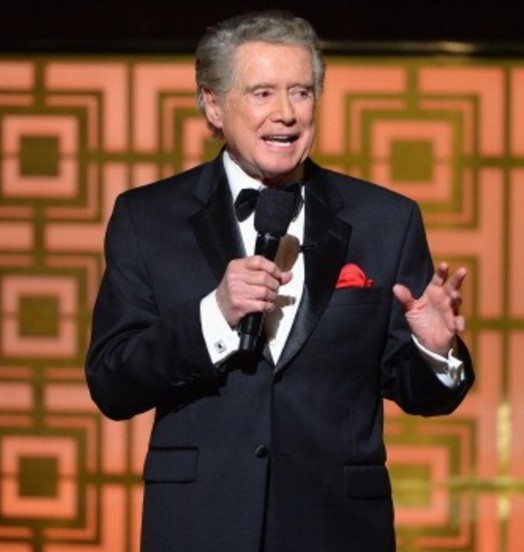 Regis Philbin is an American media personality, actor, and singer, who is widely recognized for hosting a talk and game shows since the 1960s. Philbin is also known to be the hardest working man in show business and even holds the Guinness World Record for the most hours on US television. Philbin gained fame and much recognition as the host of New York City-based talk show, “Live! with Regis and Kathie Lee”.

What is Regis Philbin Famous for?

Where was Regis Philbin Born?

Regis Philbin was born on August 25, 1931, in The Bronx, New York, United States. His birth name is Regis Francis Xavier Philbin. His nationality is American. Philbin belongs to mixed ethnicity while Virgo is his zodiac sign.

Regis was born as the eldest child in a well-to-do family to Irish father, Francis “Frank” Philbin, and Italian mother, Filomena “Florence”. His father was a U.S. Marine who served in the Pacific Ocean for several years.

Philbin and his family lived in the Van Nest section of the Bronx and was raised in a Catholic environment. He had a 20 years younger brother, Frank M. Philbin(b.March 1, 1951 – January 27, 2007), who had died from non-Hodgkin lymphoma.

Philbin attended Our Lady of Solace grammar school in the Bronx, and then he joined and graduated from Cardinal Hayes High Schoo in 1949. Later, he attended the University of Notre Dame, from which he graduated in 1953 with a sociology degree.

Soon after his graduation, he served in the United States Navy as a supply officer, then worked behind-the-scenes jobs in television and radio before moving into the broadcasting arena.

Philbin was a page at “The Tonight Show” in 1955 at the age of 24 and also was an announcer on the show in 1962. He even wrote for Los Angeles-based talk show host Tom Duggan.

He gained his first network TV exposure in 1967 as Joey Bishop’s sidekick on “The Joey Bishop Show” where he worked for 2 years until 1969.

In 1964, Philbin took over the show that replaced “The Steve Allen Show” when Steve Allen left the show.

In 1975, he began co-hosting a local morning talk show on KABC-TV, “A.M. Los Angeles” for 6 years until 1981. The show brought him his fame and recognition all over the world.

He was also a game show host as he hosted shows including “The Neighbors”, “Almost Anything Goes” and “Who Wants to Be a Super Millionaire”.

He even hosted the first season of America’s Got Talent, show on NBC, during 2006.

He was also the host of “The Apprentice 2” finale, “Million Dollar Password”, and “37th Daytime Emmy Awards”.

He has also appeared on other late-night talk shows, such as Jimmy Kimmel Live!, Late Night with Conan O’Brien, The Late Late Show with Craig Ferguson, and Late Night with Jimmy Fallon.

In 1991, Philbin was a celebrity guest at WrestleMania VII in Los Angeles.

Philbin has appeared on the sitcoms including Spin City, How I Met Your Mother, Mad About You, Hope & Faith, Seinfeld, and The Fresh Prince of Bel-Air.

On December 25, 2000, Philbin appeared as a panelist on the first season championship game of the ESPN game show 2 Minute Drill.

In November 2007, he appeared as a contestant on the show, “Celebrity Are You Smarter Than a 5th Grader?”

In February 2011, Philbin made an appearance on series, “Take Two with Phineas and Ferb”.

He guest-hosted two episodes of The Late Late Show in January 2015. In the same years, he also appeared in “Today with Kathie Lee and Hoda”.

Who is Regis Philbin Married to?

Regis Philbin has been married twice. He was first married to Catherine “Kay” Faylen. Catherine is the daughter of actor Frank Faylen. They got married in 1955 and had two children: Amy and Daniel. However, their relation couldn’t last long and after 13 years of their marriage, they divorced.

Later in 1970, he got married to his second and current wife, Joy Senese. They together have two children: Joanna Philbin and Jennifer “J. J.”. Joy Philbin. Jennifer is a producer and screenwriter.

Besides, Philbin had an angioplasty in 1993 for which he underwent triple bypass surgery at Weill Cornell Medical Center. He also went through hip-replacement surgery and surgery to have a blood clot removed from his calf.

What is the Net Worth of Regis Philbin?

The 88 years old Regis Philbin has quite a great earnings through his professional career as a television celebrity. Working in this field for more than 6 decades, he has managed to amass a great fortune worth million dollars from his several shows and movies. His current net worth is around $180 million while his salary is around $20 million.

In 2008, Philbin signed a renewed contract with ABC and reportedly he earned more than the US $21 million at that time.

How Tall is Regis Philbin?

Regis Philbin is a white man in his late 80s. Philbin has an average body physique. He stands tall with a height of 5ft. 7inch.(1.7m) while his body weighs around 75kg. He has a fair complexion with gray hair and green eyes.

Our contents are created by fans, if you have any problems of Regis Philbin Net Worth, Salary, Relationship Status, Married Date, Age, Height, Ethnicity, Nationality, Weight, mail us at [email protected]