Robert John Downey Jr., popular by the name of Robert Downey Jr. is an American actor and singer. He is best known for his role as Tony Stark/Iron Man in 10 Marvel superhero movies.A lot of my peer group think I'm an eccentric bisexual, like I may even have an ammonia-filled tentacle or something somewhere on my body. That's okay The lesson is that you can still make mistakes and be forgiven. I think you end up doing the stuff you were supposed to do at the time you were supposed to do it 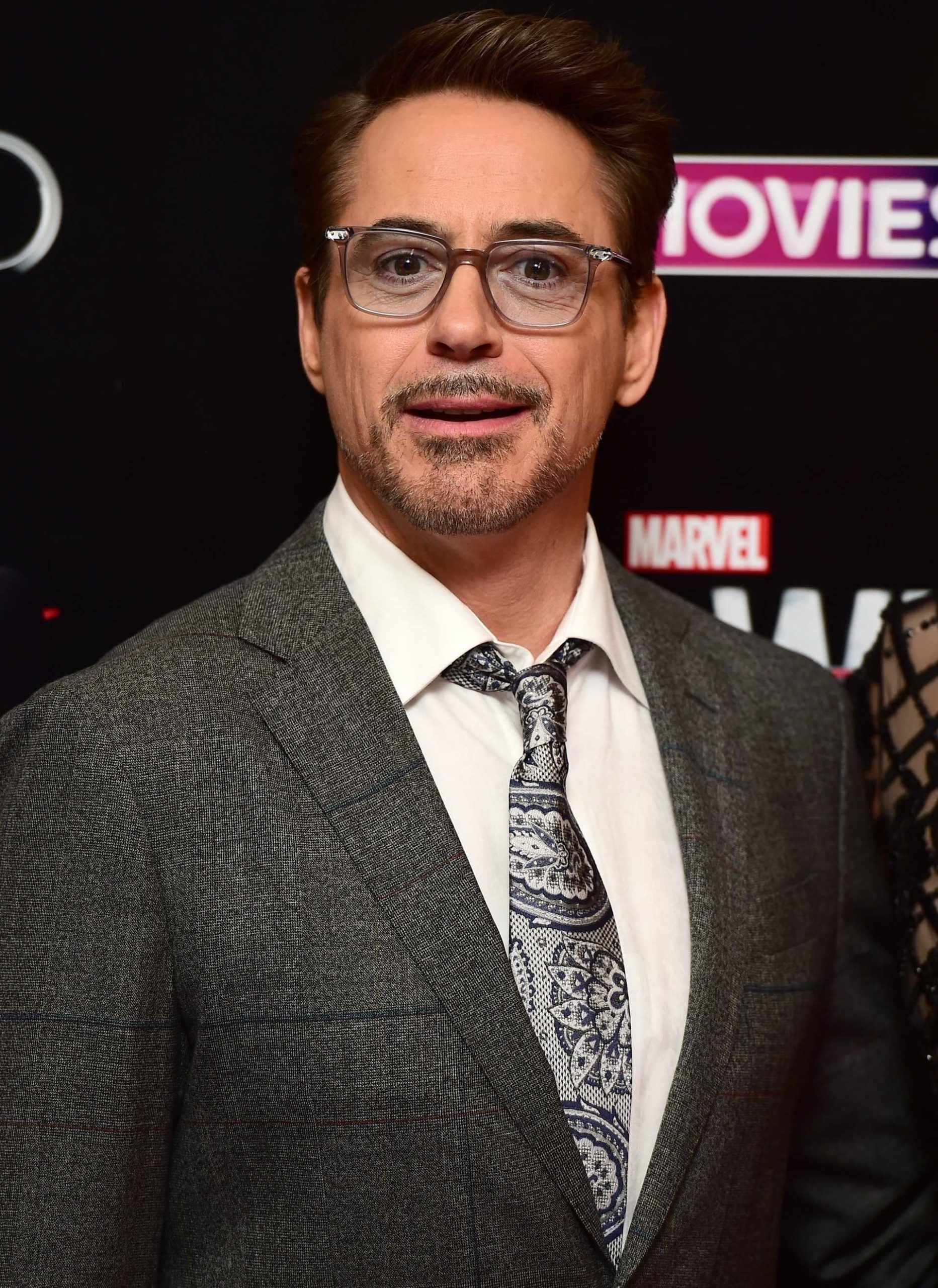 A lot of my peer group think I'm an eccentric bisexual, like I may even have an ammonia-filled tentacle or something somewhere on my body. That's okay

The lesson is that you can still make mistakes and be forgiven.

Robert John Downey Jr., popular by the name of Robert Downey Jr. is an American actor and singer. He is best known for his role as Tony Stark/Iron Man in 10 Marvel superhero movies. His movies have grossed over $14.4 billion worldwide as of August 2019. He is the second-highest-grossing box-office actor to date and was the highest-paid actor from 2013 to 2015. His youth and early career faced several substance abuse and legal troubles before gaining critical and commercial success in the entertainment industry.

What is Robert Downey Jr Famous For?

Where was Robert Downey Jr Born?

Downey was born on 4 April 1965. His birth name is Robert John Downey Jr. His birthplace is in New York City, New York in the United States. He holds an American nationality. He was born to a father, Robert Downey Sr., and a mother, Elsie Ann Ford. His zodiac sign is Aries. He has an older sister named Allyson. His father is of half Lithuanian Jewish, one-quarter Hungarian Jewish, and one-quarter Irish descent, whereas his mother had Scottish, German, and Swiss ancestry. He grew up in Greenwich Village.

His childhood and youth were surrounded by drugs. His father was a drug addict and allowed Downey to use marijuana at age six. He became a regular drug user along with his father.

He appeared in minor roles in his father’s films at an early age. He later went to England at the age of 10, where he studied classical ballet as part of a larger curriculum. He then attended the Stagedoor Manor Performing Arts Training Center in upstate New York as a teenager.

His parents divorced in 1978 and he moved to California with his father. He dropped out of Santa Monica High School in 1982. He moved back to New York to pursue his acting career. He was roommates with actor Kiefer Sutherland when he moved to Hollywood.

He made his acting debut at the age of 5 when he played a sick puppy in his father’s film, Pound in 1970.

As a teenager, he started his career in theater roles.

He was cast as a part of Saturday Night Live in 1985. Most of the crew including him were dropped following poor ratings by 1986.

He got his breakthrough role as James Spader’s character’s sidekick in Tuff Turf in 1985.

He landed his first lead role in the 1987 romantic comedy film, The Pick-up Artist.

He is sometimes named as a member of the Brat Pack after appearing in Tuff Turf, Weird Science, Back to School, Johnny Be Good.

He later appeared in several films such as Rented Lips, 1969, That’s Adequate, True Believer, Chances Are, Air America, Too Much Sun, and Soapdish.

He rose to prominence after he starred as Charlie Chaplin in the 1992 biographical comedy-drama film Chaplin. The role garnered Downey an Academy Award nomination for Best Actor.

He then appeared in films including, Hearts and Souls, Short Cuts, Hail Caesar, Natural Born Killers, Only You, Richard III, Home for the Holidays, and Restoration.

He was arrested numerous times on drug charges between 1996 and 2001.

He went through unsuccessful drug treatment programs as well.

He was arrested for possession of heroin, cocaine, and an unloaded .357 Magnum handgun in April 1996.

While on probation, he trespassed into a neighbor’s home while under the influence of a controlled substance and fell asleep in one of the beds in May 1996.

He received three years of probation and was ordered to undergo compulsory drug testing.

He spent 6 months in the Los Angeles County jail after missing one of the court-ordered drug tests in 1997.

He was arrested once again in 1999 after missing the drug test.

He was sentenced to a three-year prison term at the California Substance Abuse Treatment Facility and State Prison in Corcoran, California.

He had already wrapped up his film projects before the arrest.

He was released early on $5,000 bail after serving nearly a year.

He joined the cast of the hit television series Ally McBeal, a week after his release in 2000.

His role in Ally McBeal won him a Golden Globe Award for Best Supporting Actor and an Emmy Award nomination.

He was arrested once again when police searched his room at Merv Griffin’s Hotel and Givenchy Spa in Palm Springs. Downey was under the influence of a controlled substance and in possession of cocaine and Valium.

If convicted, he would have faced a prison sentence of up to four years and eight months.

Los Angeles police officer found Downey wandering barefooted in Culver City under the influence of a controlled substance in April 2001. Though he tested positive, he was released a few hours later.

He pleaded no contest to the Palm Springs charges and was sent to drug rehabilitation. He also received three years of probation.

He once agreed that he had bipolar disorder that led to his controlled substance addiction.

After his rehabilitation stint, he got his first acting job in August 2001, where he lip-synced in Elton John’s single “I Want Love”.

He returned to mainstream films in the mid-2000s with the 2003 film, Gothika.

He then went on to appear in the films Eros, Game 6, Kiss Kiss Bang Bang, Good Night and Good Luck, A Guide to Recognizing Your Saints, The Shaggy Dog, A Scanner Darkly, Fur, Zodiac, Lucky You, and Charlie Bartlett.

He also starred in the action-comedy film, Tropic Thunder in the same year.

Both films achieved critical and commercial success. Downey earned the Academy Award nomination for his role in Tropic Thunder. Iron Man went on to gross over $585 million worldwide.

He later reprised his role as Iron Man in the Iron Man franchise and The Avenger franchise.

His last role as Iron Man was in The Avenger: EndGame, released in 2019. With Endgame, he portrayed Iron Man in a total of 10 Marvel films including Iron Man, Iron Man 2, Iron Man 3, The Avengers, Avengers: Age of Ultron, Captain America: Civil War, Spider-Man: Homecoming, Avengers: Infinity War, and Avengers: Endgame. He had a cameo appearance as Tony Stark/Iron Man in the 2008 film The Incredible Hulk.

He also won Golden Globe for Best Actor for his role in Sherlock Holmes.

Downey and his wife Susan opened their own production company, Team Downey in June 2010.

The company’s first project was The Judge.

He released his debut musical album, The Futurist in November 2004.

He has sung on several soundtracks for his films.

He has sung for Chaplin, Too Much Sun, Two Girls and a Guy, Friends and Lovers, The Singing Detective, and Kiss Kiss Bang Bang.

He has appeared in Elton John’s songs “I Want Love”.

His most commercially successful recording has been his remake of the 1973 Joni Mitchell Christmas song “River”. The song was included on the Ally McBeal tie-in album, Ally McBeal: A Very Ally Christmas.

1993 BAFTA Award Best Actor in a Leading Role for Chaplin.

Who is Robert Downey Jr Married to?

Downey is a married man. He is married to producer Susan Levin. They started dating after they first met on the set of Gothika. Downey proposed to Susan on the night before her thirtieth birthday. The couple got married in August 2005 in a Jewish ceremony. The couple has two children, a son, and a daughter.

He was previously married to actress and singer Deborah Falconer. The couple was married between May 1992 and April 2004. Downey’s struggle with addiction failed their marriage. He has a son with Falconer. He also dated actress Sarah, Jessica Parker. They separated due to Downey’s drug addiction.

He lives with his family in Malibu, California.

How tall is Robert Downey Jr.?

Downey stands at a height of 1.72 m i.e. 5 feet and 7 inches tall. He has a bodyweight of 172 lbs i.e. 78 kg. He has an athletic body build. He has dark brown eyes and his hair color is also dark brown. He has a tattoo on one of his biceps, that reads “Suzie Q” in tribute to his wife, Susan.

What is Robert Downey Jr Net Worth?

Downey earns from his acting career. His films have grossed over $14.4 billion worldwide. He is the second-highest-grossing box-office actor to date. He was the highest-paid actor from 2013 to 2015. His net worth is estimated at $300 million.

Our contents are created by fans, if you have any problems of Robert Downey Jr. Net Worth, Salary, Relationship Status, Married Date, Age, Height, Ethnicity, Nationality, Weight, mail us at [email protected]