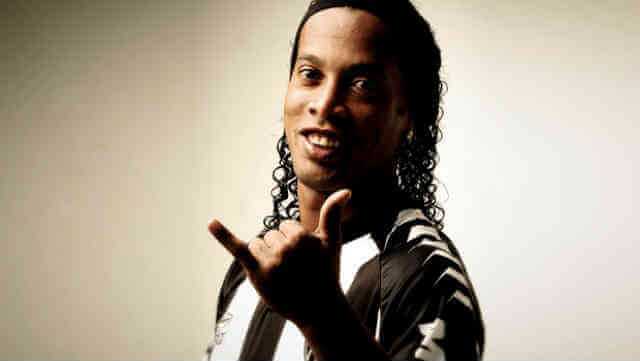 Ronaldinho is a Brazilian former football player and the ambassador for Barcelona. He is best known for being a member of the Brazilian team that won the 2002 FIFA World Cup. He has also won the champions league with FC Barcelona. He has won the FIFA Player of the Year in 2004 and 2005. He made his career debut for Gremio, in 1998. He is regarded as one of the best playmakers in history. He won two FIFA World Player of the Year awards and a Ballon d’Or. He had spent time in jail along with his brother after being arrested on 6 March, accused of using fake passports. He has been released from prison and he is currently in Paraguay. Scroll down to know more about his biography, news, career stats, contract, retirement, age, and many more.

What Had Happened in Jail?

The 2005 Ballon d’Or winner had spent time in jail along with his brother after being arrested on 6 March, accused of using fake passports. The pair had previously been denied bail but posted $800,000 (£648,000) each and must now stay in a four-star hotel in Asuncion while awaiting trial. Both Ronaldinho, 40, and his brother Roberto Assis deny any wrongdoing. Their lawyer has called their imprisonment “arbitrary, abusive, and illegal.” In allowing the pair to leave prison, Judge Gustavo Amarilla said the size of the bail paid was “significant” and would “guarantee they will not flee”. Ronaldinho had initially visited Paraguay to promote a book and a campaign for underprivileged children. He has been granted house arrest in Paraguay after allegedly entering the country with false documents.

Where is Ronaldinho now?

As of now, Ronaldinho has been released from prison and he is currently in Paraguay.

What is Ronaldinho Doing Now?

Ronaldinho visited Paraguay to promote a book and a campaign for underprivileged children. Moreover, he is the Ambassador of FC Barcelona.

What is the birthplace of Ronaldinho?

Ronaldinho was born on March 21, 1980, in the Rio Grande do Sul, Brazil. His real name is Ronaldo de Assis Moreira. He is known as Ronaldinho because of his Brazilian teammate Ronaldo Lima. His first brust with the media came at the age of thirteen when he scored all 23 goals in a 23-0 victory against a local team. He has played for a lot of clubs in Europe and Brazil. His most notable stints came with FC Barcelona and AC Milan. He has also played for Paris Saint Germain, Athletico Minero, Gremio, and Flamengo. He has scored 33 goals for Brazil in international matches. His father’s name is Joao De Assis Moreira who was a shipyard worker who also played football for a local club and his mother’s name is Dona Miguelina Elói Assis Dos Santos who worked as a salesperson later became a nurse. He has two siblings namely, Deisi De Assis Moreira, Roberto De Assis Moreira (who was also a professional soccer player). He holds Brazilian- Spanish nationality and mixed (Brazilian- African) ethnicity. His birth sign is Aries. Talking about Ronaldinho’s education history, he attended Colegio Santa Teresa de Jesus. As of 2020, he celebrated his 40th birthday.

When did Ronaldinho Retire?

Ronaldinho confirmed his retirement from football through his brother/agent: “He has stopped, it is ended. Let’s do something pretty big and nice after the Russia World Cup, probably in August” on 16th January 2018. He retired as one of just seven players to have won the FIFA World Cup, the UEFA Champions League, and the Ballon d’Or. Moreover, he appeared at the closing ceremony of the 2018 FIFA World Cup at the Luzhniki Stadium in Moscow on 15 July, performing a few bars of the Russian folk song “Kalinka” (sung by opera singer Aida Garifullina) on an African drum.

Who is Ronaldinho Dating?

Ronaldinho is a married person. Firstly, he dated Russian model, Irina Shayk in the past. In July 2002, it was reported that the Brazilian wizard had a fling with the English exotic dancer Lisa Collins. It was claimed that they had met during his visit to the Parisian club, where she used to work. He also dated Argentine model Ximena Capristo. They were dating for quite some time and in her interview with the press, she claimed that they chatted all the time, which was seen as a confirmation of their relationship. After that, he started dating dancer Janaina Mendes in 2002. He had first met her at Domingao do Faustao in Brazil. They got married in May 2004. In February 2005, she gave birth to their son, Joao, who was named after Ronaldinho’s late father. But their marriage didn’t last long as he would later claim that marriage wasn’t for him. In 2010, the Italian media linked Ronaldinho with Italian actress and TV personality, Sara Tommasi. She herself gave an interview in December 2010 to confirm that they had been dating for about two months. But their relationship also didn’t last long. After breaking up with Sara, he dated Vanessa Tasquetto, a disc jockey in the year 2013. His sexual orientation is straight.

What is the Net Worth of Ronaldinho?

The net worth of this famous former footballer is estimated to have $100 Million as of 2020. He has built his net worth mostly through his football career earnings and endorsements. At his peak, he is estimated to have an annual income of $37 million to $13 million coming from Barcelona and the rest from sponsors such as Pepsi and Nike as well as listed Ronaldinho as 38th in Forbes Celebrity 100 in 2008. He reportedly earned over $19 million from endorsements in 2006. Retired at the age of 37, he played his last professional match in 2015 for Fluminense earning $190,000 per annum as salary. He also had endorsements with many companies, including Nike, Coca-Cola, Pepsi, Gatorade, EA Sports, and Danone. In 2011, Ronaldinho signed a contract with Coca-Cola after having endorsed Pepsi for much of his career and appeared in commercials with Thierry Henry, David Beckham, and Lionel Messi. However, his contract was canceled in July 2012 after he was captured drinking Pepsi in a news conference. Regarding his house and cars, he purchased a $9.7 million mansions in Rio de Janeiro, Brazil (BR) in 2011. He owns a house in Barcelona worth around £1.66 million. Additionally, he has another house in Curitiba with a personal cinema hall and a swimming pool. He is a car enthusiast and his $1,800,000 Bugatti Veyron absolutely talks of that. He also has a Hummer H2, Audi Q7and Mercedes Benz E Class. The Ferrari 458 worth $230,000 and Lamborghini Aventador worth $393,695 also joins his collection.

How tall is Ronaldinho?

Ronaldinho is a handsome hunk with an athletic body build. He has a height of 5 feet 11 inches and he weighs is 80Kg. Ronaldinho’s hair color is dark brown and his eyes color is dark brown. His other body details will be added soon. Overall, he has got a healthy body with a charming smile.

Our contents are created by fans, if you have any problems of Ronaldinho Net Worth, Salary, Relationship Status, Married Date, Age, Height, Ethnicity, Nationality, Weight, mail us at [email protected]