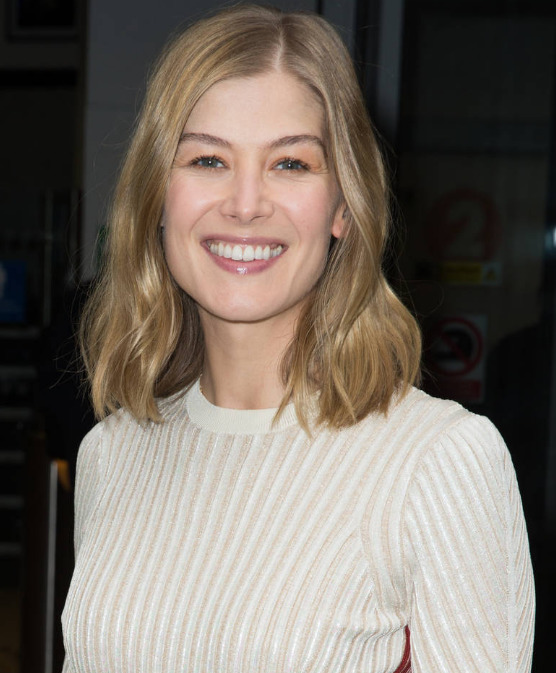 Rosamund Pike is a popular English actress who began her career with stage productions and is now a much sought-after film star. She made her acting debut on stage in productions like ‘Romeo and Juliet’ and ‘Skylight’ that got her noticed for television films and shows.

Rosamund Pike was born as Rosamund Mary Elizabeth Pike in Hammersmith, London, England. Her nationality is English and her ethnicity was white. Her zodiac sign is Aquarius.

She was born to her father Julian Pike and Mother Caroline. Her father is an opera singer and her mother is a classical violinist. Due to her parent’s work, she spent her early childhood traveling around Europe.

Taking her education, she attended Badminton School in Bristol, England, and began acting at the National Youth Theatre. While appearing in a National Youth Theatre production of “Romeo and Juliet”, she was first spotted and signed by an agent, although she continued her education at Wadham College in Oxford where she read English Literature, eventually graduating with an upper second class honors degree.

The career of Rosamund Pike

Moving towards her career, she started her acting career in her college days. She acted and directed various plays. She first appeared on TV in 1998 in Seven Days but her appearance goes uncredited. The same year, she got a major role in A Rather English Marriage.

She then appeared in several TV series like Wives and Daughters (1999), Love in a Cold Climate (2001), Seven Days (1998). She debuted in Hollywood with the 12th James Bond series, Die Another Day in 2002 for which she won Empire Awards for Best debut actress.

In 2014, she starred in David Fincher’s directed thriller, Gone Girl opposite Ben Affleck. The movie was commercially successful and she received critical acclamation for her performance. She earned 22 nominations for her role, Amy Elliott Dunne out of which she secured 10 awards including the British Independent Film Award, Saturn Awards, and Empire Awards among others.

In 2015, she lent her voice to the character Lady Penelope Creighton-Ward in the remake of Gerry Anderson’s Thunderbirds Are Go. She also featured in the music video for Voodoo in My Blood.

In 2017, she appeared in The Man with the Iron Heart and Hostiles. As of 2018, she played the character of Brigitte Kuhlmann in Entebbe and will be appearing as Wilcox in Three Seconds. Her other upcoming movies include A Private War and Radioactive. In 2019, she will be voicing the character Moomonmamma in the animated series Moominvalley.

Net Worth of Rosamund Pike

According to wiki sources, she has an estimated net worth is $ 9 Million and her remuneration is unknown. Her source of wealth is movies and TV series.

Rosamund Pike is in a romantic relationship with city businessman, Robie Uniacke. The duo started dating in 2009 and shares two sons, Solo Uniacke, and Atom Uniacke. The duo has a huge age gap of 18 years.

They are together for a long time but still, they are unmarried as she refers to marriage as an overrated thing. Currently, Pike lives a blissful married life in Harlow, Essex, England along with her boyfriend and two kids.

Previously, she was engaged to a director, Joe Wright whom she met on the sets of Pride & Prejudice in September 2007. Wright proposed to her on Lake Como in Italy. The couple called off their engagement in June 2008 just before their scheduled date to marry. Even they bought a house in Spitalfields, East London. Pike also had sent ‘save the date’ cards to everyone.

She also shared a romantic relationship with actor Simon Woods. The duo first encountered at Oxford University while studying English Literature. The pair was together for two years before their break up. As per some online sources, the main reason for their split was Woods’s doubts about his sexuality.

Our contents are created by fans, if you have any problems of Rosamund Pike Net Worth, Salary, Relationship Status, Married Date, Age, Height, Ethnicity, Nationality, Weight, mail us at [email protected]