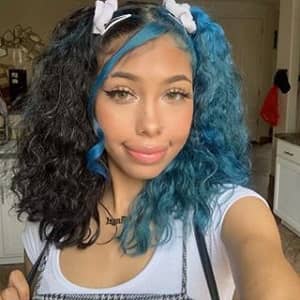 Rubee Lana is a popular American social media personality. She rose to fame thanks to her videos on Tiktok and she is even popular on Youtube even though she rarely uploads videos on the platform.

When was Rubee Lana born?

Rubee Lana was born on the 27th of November, 1999 in Chicago, Illinois, U.S.A. As of now, her age is 20. Her nationality is American and her ethnicity is mixed, African American and Mexican.

Rubee has not revealed much about her parents, not even their names. Still, she has revealed that she was raised alongside three younger and two older siblings, first in Chicago, and later in Arizona after they moved.

Rubee has not said much about her education as well. She seems well educated and judging by her age, she must have already graduated high school. But, she hasn’t given any details on where she studied.

How did Rubee Lana build her career?

Rubee joined Tiktok (formerly musical.ly) when she was still young. Despite her age, her content was entertaining and so she already had a big fanbase at the age of 18. She continued with Tiktok and it has certainly paid off. As of now, Rubee has over 3.6 million followers on the platform with over over 123 million likes. She is known for her funny content and her lip sync videos. Fans also love how bold she is with her hair and she is constantly experimenting with hairstyles and different hair dyes. She is also very good with her makeup and fans love the dramatic eye makeup she has going on in most of her content.

Rubee Lana also has a channel named rubee on Youtube. Even though she rarely posts on the platform, she has gained over 433k subscribers thanks to her hair dye tutorials and entertaining vlogs. Aside from all this, she is also massive on social media. Her popularity on Tiktok, along with her sense of humor and likable personality has gained her a lot of followers on Instagram.

What is Rubee Lana’s net worth?

Rubee has not revealed her net worth as of now. She has also kept her annual salary private and unfortunately, there aren’t any accurate estimates to these figures.

What are Rubee Lana’s physical statistics?

Rubee stands at a height of 5 feet 4 inches and weighs roughly 55 kilograms. She has a slim physique along with her good looks. Her eyes are brown and her hair is black in color. She has not revealed her body measurements as of yet.

Who is Rubee Lana dating?

At the moment Rubee is single and doesn’t have a boyfriend. She prefers to keep her personal details private and so not much is known about her dating history either. She is focused on her career at the moment and it doesn’t seem like she will be in a relationship anytime soon.

Rubee is active and has a lot of followers on social media. Over the years she has gained a huge fanbase on Instagram thanks to her Tiktok popularity, good looks, and likable personality. As of now, she has over 267k followers on Twitter.

Our contents are created by fans, if you have any problems of Rubee Lana Net Worth, Salary, Relationship Status, Married Date, Age, Height, Ethnicity, Nationality, Weight, mail us at [email protected]