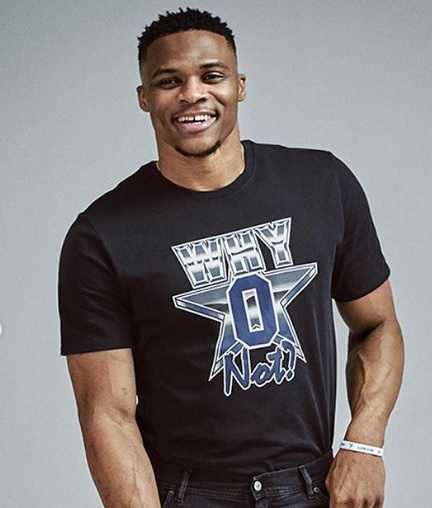 Russell Westbrook III, professionally known by the name Russell Westbrook is an American professional basketball player. He currently plays for the Oklahoma City Thunder of the National Basketball Association (NBA). He plays in the Point Guard position and was selected by the Seattle SuperSonics with the fourth overall pick in the first round of 2008 NBA draft. He holds the record to average a triple-double for a season with 25 triple-doubles in a 2017-18 season. He is considered one of the best all-around players in NBA history.

Russell Westbrook can’t take fans touching him during a game

During a game against Denver Nuggets, Russell Westbrook of The Thunder, who was close to the sideline was tapped or lightly pushed by young Nuggets fan.

Westbrook, not happy with the tapping, turned around to see the young boy, and he went over to talk to him and his father. He asked his dad to be careful and control his kid as one cant hit random people.

Where did Westbrook grow up?

He had a friend, Khelcey Barrs III, whom he hoped to join UCLA and play basketball together. However, his best friend, Barrs died from an enlarged heart during a pickup game.

He attended Leuzinger High School. During his senior year at Leuzinger High School, he averaged 25.1 points, 8.7 rebounds, 3.1 steals, and 2.3 assists and helped lead them to a 25-4 record. He also recorded 14 double-doubles, scored 30 or more points on eight separate occasions, and registered a career-best 51 points at Carson in January 2006.

He later enrolled at UCLA on scholarship to play for the college team.

He played as a back up to Darren Collison and was primarily used as a defender and energy player of the bench as a freshman at UCLA.

He was named All-Pac-10 Third Team and won the Pac-10 Defensive Player of the Year as well.

He forgoes his final two years at UCLA and declared for the 2008 NBA draft.

Seattle SuperSonics selected Westbrook with the 4th overall pick in the first round of the 2008 NBA draft. He signed with the team on 5 July 2008.

He became the first rookie since Chris Paul and the third rookie in Sonics/Thunder franchise history to record a triple-double, where he recorded his first career triple-double with 17 points, 10 rebounds, and 10 assists.

He finished fourth in the 2008-09 NBA Rookie of the Year voting. He was also named to the NBA’s NBA All-Rookie First Team.

He made his first NBA All-Star Game appearance after he was selected by the NBA head coaches to be a Western Conference reserve.

He was named to the All-NBA Second Team for the first time.

He helped the Thunder to the NBA Finals for the first time since the franchise relocated. However, they lost in five games to the Miami Heat.

He joined Michael Jordan as the only players with 25+ points and 10+ assists in their NBA Final debut.

He injured his right knee in a match against Houston Rockets in April 2013 and was declared out for the rest of the playoffs after surgery.

He would undergo arthroscopic surgery on his right knee and would be out until after the All-Star break.

Westbrook recorded 40 points, 5 rebounds, 10 assists, and 5 steals, joining Michael Jordan as the only other player to do so in a playoff game.

He missed 14 games suffering from a small fracture of the second metacarpal in his right hand against the Los Angeles Clippers in the second game of the 2014-15 season.

He became the fifth player in NBA history to record a stat line of 15-15-15 in a game after he recorded 17 points, 15 rebounds, and a career-high 17 assists against Golden State Warriors.

Westbrook and Kevin Durant became the first teammates to each have at least 25 points and 10 assists in a regulation game since 1996 achieving the feat against Denver in December 2015.

The Thunder extended his contract for $85.7 million for three years in August 2016.

He also holds the record as the only players in NBA history to average a triple-double for a season.

He extended his contract with the Thunder signing a five-year contract for $205 million in September 2017.

He became only the fourth and third-fastest players in NBA history to record 100 triple-doubles in March 2018.

He surpassed Jason Kidd to move into third place on the NBA list for triple-doubles with 108 triple doubles after he recorded his 108th career triple-double against Brooklyn Nets in December 2018.

He surpassed Gary Payton as the career scoring leader in franchise history in February 2019.

His triple-double streak in 11 consecutive games ended in the first game after the All-Star break, where he recorded 43 points, 15 rebounds, and eight assists against Utah Jazz.

He was selected to the FIBA World Championship team in Istanbul, Turkey. He finished in the top five on the team in minutes per game, and top three in points and assists per game. USA went 9-0 win its first World Championship since 1994, automatically qualifying the USA for the 2012 Olympics. With the win, they replaced Argentina for the World ranking No.1.

He later won a second gold medal at the 2012 Olympics.

He declined an invitation to join the Team USA for the 2016 Olympics.

How long has Russell Westbrook been married?

Russell Westbrook is a married man. He is married to his college sweetheart, Nina Earl. They tied a knot to each other on 29 August 2015. The couple is blessed with three children. They welcomed their first children, a son, Noah Russell Westbrook in May 2017, and twin daughters in November 2018.

Russell Westbrook is one of the influential players for The Thunder. His importance for The Thunder led to his five-year contract extension for $205 million in September 2017. He has endorsed several brands. He signed an endorsement deal with Jordan Brand in October 2012 and has appeared in Jordan’s commercials. He signed with Kings and Jax Boxer Briefs in November 2013. He was named Marketing Creative Director of the denim brand True Religion in February 2015. He became the global face of Mountain Dew Kickstart after signing with PepsiCo. As of 2019, his net worth is estimated at $125 million.

Our contents are created by fans, if you have any problems of Russell Westbrook Net Worth, Salary, Relationship Status, Married Date, Age, Height, Ethnicity, Nationality, Weight, mail us at [email protected]