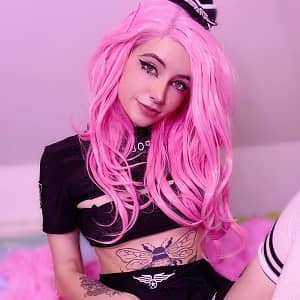 Rusty Fawkes is a popular American social media personality, cosplayer, and streamer. She is best known for her impressive cosplays that she uploads on her Instagram and Tiktok.

When was Rusty Fawkes born?

Rusty Fawkes was born on the 17th of September, 1996 in the U.S. As of now, her age is 24. Her nationality is American and her ethnicity is Caucasian.

Rusty is private when it comes to her personal life. As such, she has not revealed the names of her parents as of now. Her childhood is pretty much a mystery and Rusty has also not shared anything about her siblings.

Rusty’s education is a subject of mystery as well. While she does appear to be well educated, she has not shared any details about her educational journey.

How did Rusty Fawkes build her career?

Rusty gained internet popularity thanks to her Tiktok and Instagram accounts. She is really pretty and has impressive makeup skills as well. This really helped her as a cosplay model as she was able to do really convincing and accurate cosplays of many characters from anime games and cartoons. She has also added her own spin on several characters by making them even hotter in her cosplays. All of this has led her to gain over 400k followers on Instagram. She also has a lot of fans from the gaming community thanks to her Twitch streams and cosplays of characters from several games. Rusty also has a  Youtube account and although she isn’t very active there, the account already has over 40k subscribers.

On top of this, Rusty also has a huge following on Tiktok. Her lip-sync videos, cosplays and Tiktok dances have made her a popular personality on the platform. Most of her videos are in her cosplay outfits and she also uploads funny videos in these outfits from time to time. Rusty is consistent with her uploads and has managed to gather over 1.3 million followers as of now. Along with her popularity, Rusty has also received a lot of criticism, mainly for her revealing cosplays. But they are within community standards for the sites she uses and she also has a separate OnlyFans account for more adult content.

What is Rusty Fawkes’s net worth?

Rusty has not revealed anything regarding her net worth or annual salary as of now.

Rusty Fawkes stands at a height of 5 feet 5 inches tall and her weight is roughly 52 kilograms. She is blessed with good looks and has a slim figure along with a lot of attractive tattoos. Her body measurements are 34-26-35 inches. Her hair is naturally black and her eyes are brown in color.

Rusty Fawkes is most probably single as of now. But we can’t say this with certainty as she has kept her personal information and love life a secret. Due to this, there is no information on her previous boyfriends and relationships as well.

Rusty Fawkes is active and popular on social media. As of now, she has over 400k followers on Instagram and over 175k followers on Twitter.

Our contents are created by fans, if you have any problems of Rusty Fawkes Net Worth, Salary, Relationship Status, Married Date, Age, Height, Ethnicity, Nationality, Weight, mail us at [email protected]