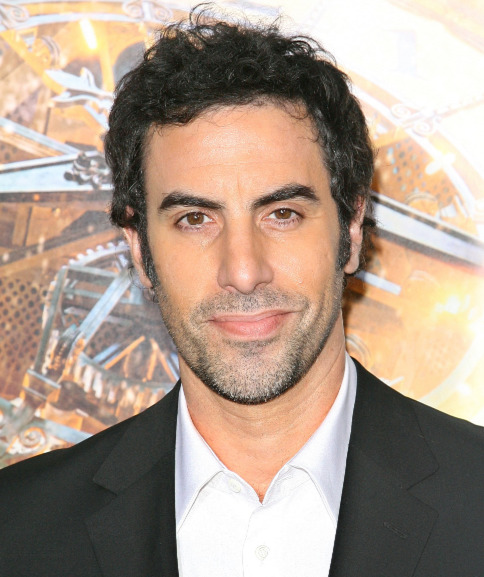 Sacha Noam Baron Cohen famed as Sacha Baron Cohen is an English actor, comedian, writer, director as well as a film producer who is famous for his creation and portrayal of several fictional satirical characters, including Ali G, Borat Sagdiyev, Bruno Gehard, and Admiral General Aladeen. Like his idol Peter Sellers, he adopts a variety of accents and guises for his characters. He made his first theatrical film debut as Vinnie in the drama film, “The Jolly Boys’ Last Stand” in 2000. He made his TV show debut as a presenter on “Pump TV” in 1995. His other work includes voicing King Julien XIII in the “Madagascar” film series (2005-2012) and appearing in films such as “Talladega Nights: The Ballad of Ricky Bobby” (2006), “Sweeney Todd: The Demon Barber of Fleet Street” (2007), “Hugo” (2011), and “Les Miserables” (2012). He made a cameo as a BBC News Anchor in “Anchorman 2: The Legend Continues” (2013). In the year 2016, he appeared in the comedy film “Grimsby” and co-starred in the fantasy sequel “Alice Through the Looking Glass”. Two years later, he created and starred in “Who Is America?” (2018) for Showtime, his first television project since Da Ali G Show, for which he was nominated for a Golden Globe Award for Best Actor-Television Series Musical or Comedy. He also portrayed Eli Cohen in the limited series “The Spy” for OCS and Netflix, for which he received a nomination for the Golden Globe Award for Best Actor – Miniseries or Television Film. In the year 2018, The Times named him among the 30 best living comedians, and in the year 2019, a panel on the television channel Gold included him in a list of the greatest ever British comedians.

Sacha Baron Cohen, the English actor who has made a career out of duping unsuspecting politicians and celebrities, hoodwinked a right-wing militia group in Washington state this weekend. A crowd of people gathered in downtown Olympia on Saturday in front of a stage near the Washington State Capitol. They were there for “March For Our Rights 3,” a rally bringing together far-right groups to demonstrate against safety regulations instituted during the Covid-19 pandemic. The event went off the rails and ended in disaster for the hosts, as the Borat and Ali-G prankster took to the stage disguised as a clownish bluegrass singer and led the crowd in a racist sing-along that included lyrics about President Obama, Dr. Anthony Fauci, and the “Wuhan flu.” “It ain’t no jokes, the corona is a liberal hoax,” Cohen sang through his fake beard, “WHO, what we gonna do? Chop ’em up as the Saudis do.” The prank apparently involved a significant amount of work to pull off. The fictitious ‘Back to Work USA’ group, which claimed to be an Orange County-based movement calling for an end to “unconstitutional directives in the fight against COVID-19” approached the organizers and paid around $50,000 for facilities and services, and even provided a real headliner, country singer Larry Gatlin, who was in attendance.

Where was Sacha Baron Cohen born?

On 13th October 1971, Sacha Baron Cohen was born with the birth name/real name of Sacha Noam Baron Cohen. As of 2019, he celebrated his 48th birthday. His birthplace/hometown is in Hammersmith, London, UK. At present, he is residing n LA, California, and Central London, England. His nationality is English and his ethnicity is English-White. His race is White. He was born to his parents; Gerald Baron Cohen (father) and Daniella Naomi Baron Cohen nee Weiser (mother). His father was a clothing store owner who died in 2016 whereas his mother was a movement instructor and photographer. Talking about his siblings, he has two brothers namely Erran Baron Cohen (Composer, Trumpet Player, Founder of the band Zohar), Amnon Baron Cohen (Computer Programmer). His maternal family was German Jewish emigrants to Israel. His paternal family was also Ashkenazi Jews, who moved to Pontypridd and London in the United Kingdom. His paternal grandfather, Morris Cohen, added “Baron” to his surname. His maternal grandmother, who lived in Haifa, Israel, trained as a ballet dancer in Germany. His cousin Simon is an autism researcher. As per his education, he studied at The Haberdashers’ Aske’s Boys’ Public School in Elstree, Hertfordshire. He later majored in History for a Bachelor’s Degree in Arts at Christ College; a constituent college of the University of Cambridge and graduated in 1993. During his undergraduate study, he became an active member of the Amateur Dramatic Club (ADC), the oldest university dramatic society in England and the largest dramatic group in Cambridge. After graduating, the comedian briefly worked as a model in the fashion industry before landing his first TV gig as a presenter on Windsor’s local cable network. Moreover, Sacha also joined the French theatre school Ecole Philippe Gaulier to train with Master Clown Philippe Gaulier. He taught his students the slapstick style of comedy called bouffon to uncover their inner clown that is an exaggerated or caricatured representation of their actual personality. His religion is Judaism and his zodiac sign is Libra.

How was the career of Sacha Baron Cohen?

Sacha Baron Cohen won Best Newcomer at the 1999 British Comedy Awards, and at the British Academy Television Awards he was nominated for Best British Entertainment Performance for his character Ali G for the British television show The 11 O’Clock Show on Channel 4. Even, he was named comedian of the year in 1999  for the same show. “Da Ali G” Show began in 2000 and won the BAFTA for Best Comedy in the following year. He then accepted the Outstanding Achievement Award from Sir Ben Kingsley in the guise of Ali G and stated: “I is grown up now. I ain’t living in my nan’s house anymore. I is living in her garage”. He won the 2007 Golden Globe in the “Best Actor – Musical or Comedy” category, his sixth such award for his character as Borat. On 23rd January 2007, he was nominated for an Academy Award for Best Adapted Screenplay. He shared his nomination with the film’s co-writers, Ant Hines, Peter Baynham, Dan Mazer, and Todd Phillips. On 26th February 2012, he was allegedly banned from attending the 84th Academy Awards in his role as Admiral General Aladeen but the rumor was denied by the Academy, saying “we haven’t banned him, he is lying” but made it clear that “Cohen is not welcome to use the red carpet as a platform for a promotional stunt”. In 2019, he was awarded an International Leadership Award by the Anti-Defamation League for leadership in fighting bigotry and prejudice.

Who is Sacha Baron Cohen’s Wife?

Sacha Baron Cohen is a married man. He met English-Australian actor ‘Isla Fisher’ in the year 2002 at a party in Sydney, Australia. The duo then got engaged in the year 2004. The couple welcomed their first baby/kid, a daughter named Olive in 2007, after which Fisher converted to Judaism. The couple got married in a traditional Jewish ceremony on 15th March 2010 in Paris, France. In the year 2010, they were blessed with their second daughter Elula Lottie Miriam. In the year 2015, the couple was blessed with their son Montgomery Moses Brian. The duo also donated £335,000 ($500,000) to Save the Children as part of a program to vaccinate children in northern Syria against measles, and the same amount to the International Rescue Committee also aimed at helping Syrian refugees on 28th December 2015. As of now, the duo is enjoying their life a lot without any disturbances. His sexual orientation is straight and he is not gay.

How much is Sacha Baron Cohen’s Net Worth?

Sacha Baron Cohen is an English actor, comedian, writer, director, and film producer. With his multiple careers, he has accumulated a huge amount of money. As of 2020, the net worth of Sacha Baron Cohen is estimated to have more than $130 Million. Не mаdе thіѕ fоrtunе bу арреаrіng іn а numbеr оf fіlmѕ аnd tеlеvіѕіоn ѕhоwѕ. Ніѕ fіlmѕ hаvе grоѕѕеd іn mіllіоnѕ аt thе bох оffісе. Sacha Baron hаѕ аlѕо wrіttеn, аnd ехесutіvе рrоduсеd mаnу fіlmѕ. His house in Hollywood Hills is worth $19 million. He also owns a mini cooper. He has appeared in the TV commercials for several brands such as Amstel Beer and McCain’s Micro Chips. In 1999, Sacha was cast to play the character of “Super Greg”, a fictional DJ to participate in an online viral marketing campaign for Lee Jeans that concluded with a TV commercial. He was featured in a TV commercial for NBA Basketball on TNT in 2005. As of now, he is satisfied with his earnings. He is living a luxurious lifestyle from his earnings.

How tall is Sacha Baron Cohen?

Sacha Baron Cohen is a very handsome man with a charming personality. His body build is slim. He has got a tall height of 6 ft 3 in with a balanced and healthy weight of 80 Kg. His hair color is black and eye color is light brown. His hair is curly. His shoe size is 12.5 US. His smiling character attracts a lot of people towards him.

Our contents are created by fans, if you have any problems of Sacha Baron Cohen Net Worth, Salary, Relationship Status, Married Date, Age, Height, Ethnicity, Nationality, Weight, mail us at [email protected]