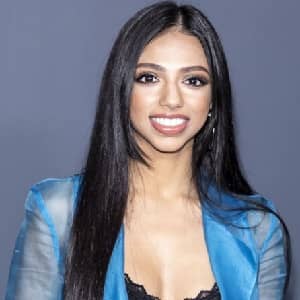 Saleka Shyamalan is an American musician. She is better known as the eldest daughter of American filmmaker, M. Night Shyamalan. He is famous for his works in ‘The Sixth Sense’, ‘Unbreakable’, ‘Signs’, etc.

How old is Saleka Shyamalan?

Saleka Shyamalan was born in Bryn Mawr, Pennsylvania, US in 1996. As of 2021, her age is 24. Her ethnicity is Indian-American. Talking about her parents, her father’s name is M. Night Shyamalan, a famous American filmmaker and actor, and her mother’s name is Bhavna Vaswani. She has two sisters named Shivani Shyamalan and Ishani Shyamalan.

Talking about her educational background, in 2018, she earned her graduation from Brown University located in Providence, Rhode Island.

How did Saleka Shyamalan become famous?

Saleka Shyamalan is best known as the daughter of M. Night Shyamalan. However, she does have a music career of her own and is slowly turning into a star. She has performed as opening acts for Boyz II Men, Baby Rose and Summer Walker.

Moreover, she also gained acclaim for her debut single ‘Clarity’. Two months after the release of Clarity, she released ‘Mr Incredible’ which has also done well and has gained over 880k views on Youtube whereas ‘Clarity’ has garnered over 337k views.

What is the Net Worth of Saleka Shyamalan?

There is no information about the net worth of Saleka Shyamalan. Her father, on the other hand, has an estimated net worth of over $50 million as of 2021. His main source of income is filmmaking.

Saleka has not revealed her height, weight, and other body measurements. She has dark brown eyes and black hair.

Is Saleka Shyamalan dating anyone?

Saleka Shyamalan is currently in a relationship. She is dating a guy named Joseph Keim. They have not revealed much about their relationship. The couple does upload pictures and videos regularly on their social media handles of each other and seem to be very much in love.

Our contents are created by fans, if you have any problems of Saleka Shyamalan Net Worth, Salary, Relationship Status, Married Date, Age, Height, Ethnicity, Nationality, Weight, mail us at [email protected]