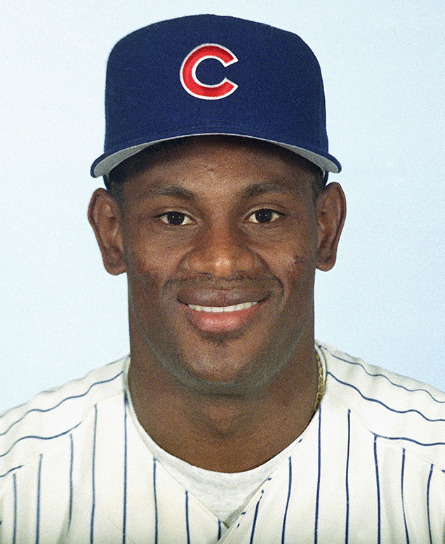 Samuel Peralta Sosa famed as Sammy Sosa is a famous Dominican American former professional baseball right fielder who played in Major League Baseball (MLB) for 19 seasons, primarily with the Chicago Cubs. After playing for the Texas Rangers and Chicago White Sox, Sosa joined the Cubs in 1992 and became regarded as one of the game’s best hitters. He hit his 400th home run in his 1,354th game and his 5,273rd at-bat, reaching this milestone quicker than any player in National League history. Sosa and Mark McGwire achieved national fame for their home run-hitting prowess in pursuit of Roger Maris’ home run record in 1998. He hit his 600th career home run to become the fifth player in MLB history to reach the milestone while he was playing for Rangers. On 3rd June 2009, he announced his intention to retire from baseball. He made the announcement in the Dominican Republic and said that he was calmly looking forward to his induction into the Baseball Hall of Fame since his statistics were up to par.

Sammy Sosa no longer looks like he did during the 1990s when he battled Mark McGwire for home run supremacy. His change in appearance has been the subject of questions for a while, and the scrutiny has increased this weekend in response to ESPN releasing a documentary about his prolific 1998 summer on the baseball diamond. He’s said in the past that his skin carries a different appearance now because of a cream he uses that includes bleach, a practice that has garnered criticism and jokes on social media. “It’s a bleaching cream that I apply before going to bed and whitens my skin some,” Sosa said in a 2009 interview with Univision after a photo was taken at the Grammy Latino Awards, the first look at Sosa’s lighter complexion. In a 2018 interview with NBC Sports Chicago, he said he is healthy and denounced the criticism he’s received amid rumors of skin bleaching. He has maintained his lightened skin tone was an unintended side effect of using the cream and unrelated to race: “I’m not a racist, I live my life happily.”

What is the Birthplace of Sammy Sosa?

On 12th November 1968, Sammy Sosa was born with the birthname/real name of Samuel Peralta Sosa. His birthplace/hometown is in San Pedro de Macoris, Dominican Republic, and is part of Haitian descent. Aa of 2019, he celebrated his 51st birthday. He is Dominican by nationality and his ethnicity is Mixed. his race is Mixed. His star sign is Scorpio and his religion is Christian. He was born to his parents and he is known to family and friends as “Mikey”. His maternal grandmother, who had suggested his birth name of Samuel, also came up with his nickname: “[She] heard the name on a soap opera she liked and decided from that moment on he would be Mikey.”

How was the Baseball Career of Sammy Sosa?

Sammy Sosa won the National League Most Valuable Player Award for leading the Cubs into the playoffs in 1998, earning every first-place vote except for the two casts by St. Louis writers, who voted for McGwire. He and McGwire shared Sports Illustrated magazine’s 1998 “Sportsman of the Year” award. Sosa was honored with a ticker-tape parade in his honor in New York City, and he was invited to be a guest at US President Bill Clinton’s 1999 State of the Union Address. He also received the Babe Ruth Home Run Award for leading MLB in homers. He won the Silver Slugger Award (an award for offensive output, voted on by managers and coaches) in 1995 and in 1998 through 2002.

Who is Sammy Sosa married to?

Sammy Sosa is a married man. He was married to Sonia Rodríguez, a Dominican TV dancer as a child, with whom he has six children: Keysha, Kenia, Sammy Jr., Michael, Kalexy, and Rolando. The couple was married by the Catholic Church on 18th December 2004, at Altos de Chavon, La Romana; they had already been married civilly for 12 years. The duo is enjoying their life a lot without any disturbances. His sexual orientation is straight.

Previously, he was married to Karen Lee Bright in 1990, but the couple divorced in 1991.

How much is Sammy Sosa’s Net Worth?

Sammy Sosa is a former professional baseball right fielder who played in Major League Baseball (MLB) for 19 seasons, primarily with the Chicago Cubs. With the baseball career, he has amassed huge money. As of 2020, the net worth of Sammy is believed to be $70 Million. His major source of earning is from a baseball career. Besides this, he might also be earning from various endorsement deals, sponsorship, and more. As of now, he is living a cool lifestyle from his earnings.

How tall is Sammy Sosa?

Sammy Sosa is a very cool and handsome person. He has got a very charming wide smile attracting a lot of people towards him. He has got a perfect height matching with his body weight. His balanced height consists of 1.83 m whereas his weight is 102 Kg. His body build is average. Overall, he has got a healthy body with balanced body measurements.

Our contents are created by fans, if you have any problems of Sammy Sosa Net Worth, Salary, Relationship Status, Married Date, Age, Height, Ethnicity, Nationality, Weight, mail us at [email protected]