Nuufolau Joel Seanoa famed as Samoa Joe is an American professional wrestler who is currently signed to WWE where he performs on the Raw brand. 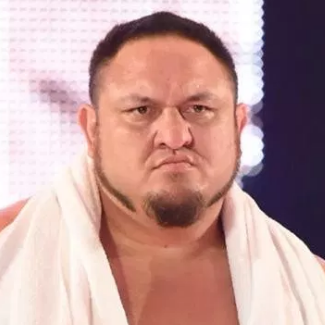 It's all about starting momentum, hitting the ground running, and starting out hot

I had the greatest deal in the history of professional wrestling. I could work for WWE, anybody else that I wanted to, and collect income from every one of those companies, including merchandise. It was a really good deal

Obviously, when you come to WWE, the level of spectacle and production in what we do is far and above anywhere else I worked, so it's kind of cool to be a part of the big show now

Nuufolau Joel Seanoa famed as Samoa Joe is an American professional wrestler who is currently signed to WWE where he performs on the Raw brand. He was previously best known for his time with promotions Total Nonstop Action Wrestling, TNA, and Ring of Honor. His ring names are Joe Samoa, King Joe, Samoa Joe, and more. In March 2019, he won his first title on the main roster, the United States Championship.

Samoa Joe wasn’t happy about the RAW Reunion special. He said these shows are a plague to WWE. Joe said that instead of his show of violence tonight in the ring; we got The Usos with their daddy. They spat limericks at John Cena. He called it embarrassing. However, it surprised Joe they didn’t do more pandering, more dancing, and passed out Stinkfaces. The Big Dog interrupted and took his time getting to the squared circle. They stared each other down. Reigns said if Joe has something to say about his family; then say it. Joe said he’s already said it. Reigns said Joe is from the same island, so he knows what happens next. Reigns stepped to him. Joe did know, but before they got into this, Joe swung a cheap shot but Reigns fought him off. He went for the eyes and drove Reigns into the ring post, sending him out. Joe followed Reigns to the floor and launched him into the barrier. He hit strikes and a headbutt. Fans booed as he walked away. Reigns apologized to the fans and said not all Samoans are cowards. Joe stopped on the ramp and said we’re about to see a Samoan get put out permanently tonight. He asked Reigns if he wants the match, and Reigns did. Joe said he’d got it. Joe tossed the mic and headed back to the ringside area. Thus, a referee entered the squared circle.

Samoa Joe was born on 17th March 1977, in Orange Country, California, the United States as Nuufolau Joel Seanoa. He was born to an American family and is an American by his nationality. His ethnicity is White. There is no information regarding his parents and siblings. His religion is Christian. As a youth, he was a California State Junior Judo Champion and was an all-league football player while attending Ocean View High School. He resided mainly in Huntington Beach and spent time during his childhood in Ewa Beach, Hawaii.

Samoa is a very handsome person with a white skin tone. He has got an enormous weight of 128 Kg or 282 lb with an average height of 6 ft 2 in or 188 cm. Overall, he has got a healthy body with a charming smile on his lips attracting a lot of people towards him. His other body measurements have not been disclosed yet but we will let you know soon once we get information about his body measurements.

The career of Samoa Joe

Samoa Joe is a happily married man. He got married to his long-term loving girlfriend, Jessica Seneo. The couple tied their knots on 27th July 2007, among their family and friends. The couple doesn’t have children yet. As of today, the couple is enjoying their life a lot and there is no sign of disturbances between them.

Net Worth of Samoa Joe

As of 2019, Samoa Joe has an estimated net worth of $5 million including all of his properties and earnings. He is currently receiving an annual salary of $80,000, from WWE. The maximum of his net worth is built through his progression in WWE Network. He officially debuted in WWE’s developmental territory NXT in May 2015 and signed a full-time contract with the company in June. There is no doubt that he is satisfied with his earnings.

Our contents are created by fans, if you have any problems of Samoa Joe Net Worth, Salary, Relationship Status, Married Date, Age, Height, Ethnicity, Nationality, Weight, mail us at [email protected]