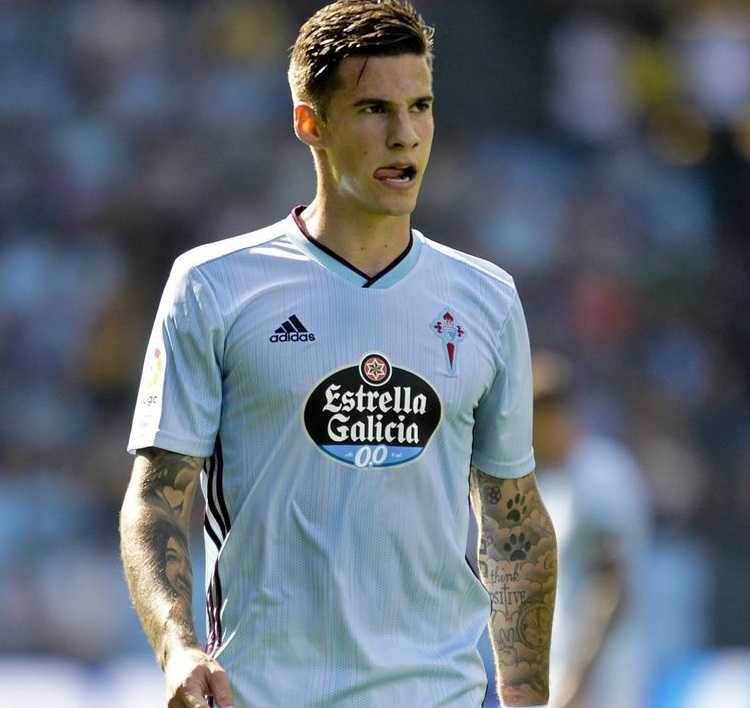 Santiago Mina Lorenzo, professionally known as Santi Mina is a Spanish professional football player. He plays as a forward. He currently plays for Spanish club RC Celta de Vigo. He started his football career from Celta. He moved to another Spanish club Valencia in 2015 and later returned to his former club in 2019.

He has represented the Spain national team at various age levels. He has yet to debut for the senior international team.

What is Santi Mina Famous For?

Where was Santi Mina Born?

Santi Mina was born on 7 December 1995. His birth name is Santiago Mina Lorenzo. His birth place is in Vigo, Galicia in Spain. He holds Spanish nationality. He was born to a father, Santiago. His father was also a footballer who played as a defender for several clubs in the 1970s and 1980s.

He started playing football from his hometown club RC Celta de Vigo, having joined the club’s youth system in 2005.

He was promoted to the club’s senior team in 2012.

He made his senior debut with the reserves in the 2012-13 season in Tercera Division.

He signed his first professional contract with Celta in January 2013.

He made his La Liga debut against Getafe CF in February 2013.

He scored his debut goal against Athletic Bilbao in September 2013.

He became the club’s youngest goalscorer in the first division.

Following the end of the 2014-15 season, he moved to another Spanish club, Valencia.

He signed a 6-year contract worth 10 million Euro with the club in July 2015.

He scored his debut competitive goal for Valencia against Barcelona in December 2015.

He scored 2 goals and provided three assists in the first half of the UEFA Europa League last 32 tie against SK Rapid Wien in February 2016.

He scored 42 goals in 150 appearances in all competitions for Valencia.

He was part of the Valencia team that won the Copa del Rey 2018-19 defeating defending champions Barcelona 2-1 in the final.

Mina returned to his former club, Celta after spending 4 years with Valencia.

He has yet to debut for the Spain senior team.

Who is Santi Mina Dating?

How tall is Santi Mina?

Santi Mina stands at a height of 1.81 m i.e. 5 feet and 11 inches tall. He has an athletic body build. He has a body weight of 77 kg. He has dark brown eyes and his hair color is black.

What is Santi Mina Net Worth?

Santi Mina earns from his professional football career. His income comes from contracts, salaries, and endorsements. He joined Valencia in 2015 for 10 million Euros. His contract detail is not available at present. Thus, his salary and net worth will be updated soon.

Our contents are created by fans, if you have any problems of Santi Mina Net Worth, Salary, Relationship Status, Married Date, Age, Height, Ethnicity, Nationality, Weight, mail us at [email protected]