Sara Gilbert is an American actress, director, and producer known for her role as Darlene Conner on the ABC sitcom Roseanne, for which she received two Primetime Emmy Award nominations. 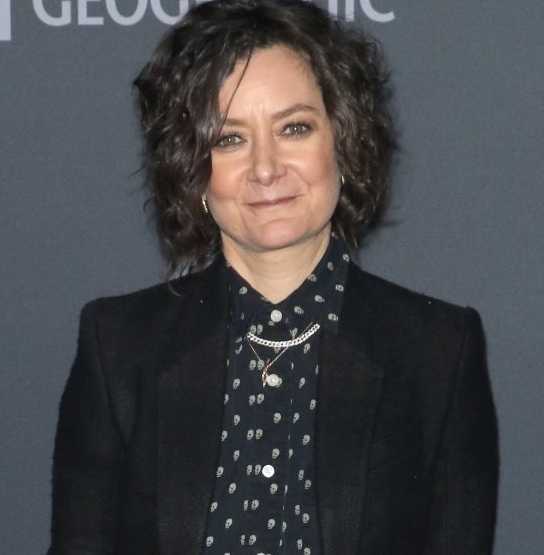 Sara Rebecca Abeles, popularly known as Sara Gilbert is an American actress. She is best known for her role as Darlene Conner on the ABC sitcom Roseanne. She received two Primetime Emmy Award nominations for her role in Roseanne. She also appeared in a recurring role on The Big Bang Theory. She was also the co-host and creator of the CBS daytime talk show The Talk.

What is Sara Gilbert Famous For?

– Her role as Darlene Conner on the ABC sitcom, Roseanne.

– Co-host and creator of CBS daytime talk show The Talk.

Where was Sara Gilbert Born?

Sara Gilbert was born on 29 January 1975. Her birth name is Sara Rebecca Abeles. Her birthplace is in Santa Monica, California in the United States. She holds an American nationality. She was born to a father, Harold Abeles, and a mother, Barbara Cowan. She has two siblings, Melissa Gilbert, and Jonathan Gilbert on her mother’s side. She also has two siblings on her father’s side, Patrice and Joseph. Her zodiac sign is Aquarius.

She attended Yale University, where she graduated majoring in art with an emphasis on photography.

She started her career appearing in television movies and commercials. She appeared in a commercial for Kool-Aid.

She landed the role of Darlene Conner in Roseanne. She was 13 at the time.

She also wrote an episode on the fourth season of Roseanne.

The revival series of Roseanne started airing in March 2018. Its second season was canceled after one season due to controversy.

She has been reprising her role as Darlene Conner on the Roseanne spin-off sitcom, The Conners since 2018.

She appeared in a recurring role as Leslie Winkle on The Big Bang Theory.

She had recurring roles in the hospital drama ER and sitcom The Class.

Her other major series are Welcome to New York, 24, Bad Teacher, and Living Biblically.

Gilbert starring in The WB sitcom Twins was canceled after one season.

She is the creator, executive producer of the CBS daytime talk show, The Talk since 2010.

She finally appeared on The Talk as co-host on 2 August 2019.

She has guest appeared in TV series, Weird City, Jane the Virgin, Supergirl, Grey’s Anatomy, HawthoRNe, Law & Order: Special Victims Unit, Private Practice, Girls on the Bus, The Clinic, Strong Medicine, and Will & Grace among others.

She made her film debut as Sylvie Cooper in the 1992 film Poison Ivy.

She has also appeared in Dead Beat, Walkin’ on Sunshine: The Movie, Desert Blue, Light It Up, High Fidelity, and Riding in Cars with Boys.

She directed her short film Persona Non-Grata in 1998.

She had a cameo appearance in the 2004 film Laws of Attraction.

Who is Sara Gilbert Married to?

Gilbert dated Johnny Galecki as a teenager. She realized she was a lesbian while dating Galecki. She started dating tv producer Allison Adler in 2001. The couple has two children, Levi Hank, and Sawyer Jane. Hank was born to Adler whereas Jane was born to Gilbert. She came out as a lesbian before launching her talk show, The Talk in 2010. She and Adler separated in 2011.

She started dating Linda Perry. The couple got engaged in April 2013. They tied a knot to each other in March 2014. She gave birth to Rhodes Emilio Gilbert in February 2015.

She lives in California.

What are Sara Gilbert Body Measurements?

What is Sara Gilbert Net Worth?

Sara Gilbert earns from her acting career. She has appeared in numerous television sitcoms, series, and movies. She also created, produced, and co-hosted daytime talk show, The Talk. Her net worth is estimated at $35 million.

Our contents are created by fans, if you have any problems of Sara Gilbert Net Worth, Salary, Relationship Status, Married Date, Age, Height, Ethnicity, Nationality, Weight, mail us at [email protected]