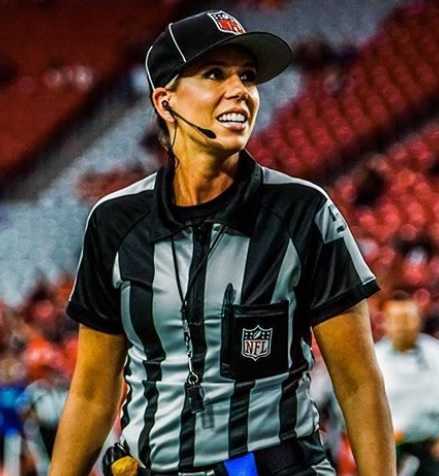 Sarah Thomas is an American football official referee, who is currently the official for the National Football League (NFL). She became the first female on-field official to work in the NFL playoff game on 13 January 2019. She is the first woman to be on the officiating crew headed by referee Ronald Torbert during the 2018 NFL season. She was hired as the first full-time female official in NFL history on 8 April 2015. She was also the first woman to officiate a major college football game,  a Big Ten stadium.

Sarah Thomas has one more story written in American football history. She became the first female on-field official to work in the NFL playoff game. She worked as the down judge in the game between New England Patriots and the Los Angeles Chargers on 13 January 2019.

She is already the first permanent female official in NFL history when NFL announced her recruitment on 8 April 2015.

She has also procured the title of being the first female to officiate a major college football game, a bowl game, and to officiate in a Big Ten.

Sarah Thomas was in 1973. Her birth name is Sarah Bailey. She was born in Pascagoula, Mississippi in the United States. She holds an American nationality.

She grew up in attended Pascagoula High School. After graduating from high school, she attended the University of Mobile on a basketball scholarship.

The career of Sarah Thomas

She began her officiating career in 1996 after she attended the Gulf Coast Football Officials Association meeting.

In 1999, she worked her first varsity high school game.

In 2006, she was hired for the Conference USA staff after she impressed Gerry Austin with her skills at the officials’ camp.

In 2007, she became the first female to officiate a major college football game.

She is one of the female officials at the Football Bowl Subdivision level during the 2009 season.

At the end of the 2009 season, she was selected to work the Little Caesars Pizza Bowl

She became the first woman to officiate a bowl game after she officiated the match between Marshall and Ohio.

She also worked in the league championship game in 2010.

In November 2011, she became the first female to officiate in a Big Ten stadium when she worked as a line judge between Northwestern and Rice.

In 2013, she became one of the 21 finalists in contention for a permanent NFL officiating position.

She was part of the NFL Officiating development program and spent three days at the Indianapolis Colts minicamp.

NFL officially announced on 8 April 2015, that she would become the first permanent female official in NFL history.

She made her NFL regular-season debut in a game between the Kansas City Chiefs and the Houston Texans at NRG Stadium in September 2015, where she was the part of Pete Morelli’s crew as the line judge.

She is also the first female to earn an on-field assignment for a playoff game.

She was named to the crew for the game between the New England Patriots and Los Angeles Chargers on 13 January 2019.

The NFL official is married to Brian Thomas. They tied a knot to each other in 2000. The couple is blessed with 3 children. They are Brady Thomas, Bailey Thomas, and Bradley Thomas. The family is living happily together.

Currently, she lives with her family in Brandon, Mississippi.

Net Worth of Sarah Thomas

The net worth of Sarah Thomas, the first female on-field official in the NFL playoff is currently unavailable. It will be updated soon.

Our contents are created by fans, if you have any problems of Sarah Thomas Net Worth, Salary, Relationship Status, Married Date, Age, Height, Ethnicity, Nationality, Weight, mail us at [email protected]