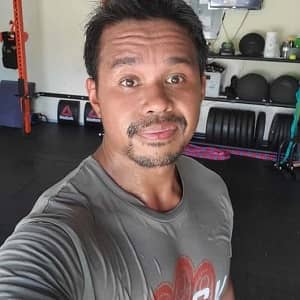 Sarath Ton is one of the famed American Professional wrestlers as well as a costume designer in the field of wrestling entertainment. Alongside, Sarath is renowned as the husband of one of the famous WWE wrestlers named Sasha Banks.

Sarath Ton was born on 9 June 1983. As of 2021, Ton’s age is 37 years old. Likewise, his birthplace is Springfield, Massachusetts. Sarath has a birth sign of Gemini. Talking about his nationality and ethnicity, Ton holds American nationality whereas his ethnicity is Far-East-Asian along with Vietnamese descent. Additionally, Sarath has many nicknames including Mikaze, Mr. Castle, Rutherford Hayes, and Mikaze kid.

The ex-wrestler’s father is Saroeun Ton whereas the mother is Mul Ton. Professionally, his father is the team leader of a senior production at Friendly’s restaurant. The restaurant is in Springfield, Massachusetts. Moreover, his mother, Mul is a financially accountable woman. Ton was blessed with two siblings whose names are Sarann Ton and Saren Ton respectively. It is believed that Ton had completed his basic schooling in Springfield. During his school days, Sarath had a curiosity about costume designing and so on. His other educational details are still unknown to the public.

How did Sarath Ton pursue her career?

At an early age, Sarath was an interested kid in the costume designing world. As mentioned earlier, he had gained some sort of interest in costume designing while he was in school. On the other side, Ton’s wrestling career started on 2 November 2002. He debuted in Premiere Wrestling Foundation Northeast representing him as a kid Mikaze. He was trained by the local wrestler named Kevin Landry from Massachusetts. Young Sarath Toon learned two years to make him a professional wrestler. Surprisingly, Mikaze won his 1st title in the first year of his professional career on November 16, 2002. He along with Mike Paiva was the conqueror of the PWF Northeast Tag Team Championship.

Talking more about his career, Mikaze participated in Chaotic Wrestling following the success he bagged in the first year of his career. He also emerged on Top Rope Promotions, New England Frontier Wrestling, as well as in Connecticut Wrestling Entertainment. Sarath was a very enthusiastic personality and hence took his career to the next level by signing a contract with WWE. Ton performed on Monday Night Raw as well. This time he represented himself as Rutherford Hayes leaving his before name Kid Mikaze.

Sarath ended his long wrestling career after he completed his match featuring opposite to his future wife at a deadly four-way intergender match. Ton’s fans and rivals also praised his brilliant fighting technique. Ton blended martial arts with wrestling in the ring. He gained so much popularity at a time that audiences came to the arena to watch his technique attacks as well as his aerial fighting skill. Sarath furthermore, developed ‘The perfect weapon’ which is nothing but just his way of the reverse shooting star press. This style was highly praised in the WWE industry by everyone.

What is the net worth of Sarath Ton?

Ton is one of the well-balanced personalities economically. His main source of income was the wrestling industry from where he earned a huge amount of money. Following the success, he is currently working as a costume designer for his wife, Sasha Bank. Therefore, we can believe that has a nice earning from his occupation.

Moreover, it is believed that Sarath Ton has a net worth of less than $5million. Similarly, his beloved wife, Sasha Bank also has a good net worth of around $4million. On the other hand, Ton’s other assets and property details are still unknown to the public.

The 37 years old ex-wrestler has got fibrous and athletic body structure. Sarath Ton has a fair height of 5feet and 6inches (67inches). Likewise, Ton has also got good muscles and biceps and has maintained his body weight. He weighs 75kg. Moreover, Sarath has black eyes as well as black hair color. On the other side, his other details are still unknown.

At present, Ton is a married man. He married his long relationship girlfriend named Sasha Bank. The duo tied the knot on 4 August 2016. Their first meeting was in Chaotic Wrestling. They were in a relationship privately until they revealed their marriage. The duo started their career on the same platform. Currently, the couple lives a happy life and does not have any kids.

Our contents are created by fans, if you have any problems of Sarath Ton Net Worth, Salary, Relationship Status, Married Date, Age, Height, Ethnicity, Nationality, Weight, mail us at [email protected]