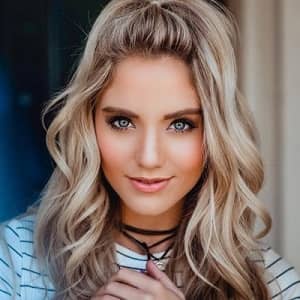 How old is Savannah LaBrant?

Savannah LaBrant was born as Savannah Rose Soutas on March 02, 1993, in Santa Clara, California. As of 2020, her age is 27. She was born to her mother Deborah Soutas but there is no information about her father.

Soutas grew up with her younger sister Chantelle Paige Soutas.

How did she become so famous?

Savannah works as a full-time photographer. Moreover, she is also a fashion blogger and has her own clothing store called SavLaBrant. However, LaBrant is best known for her social media accounts.

She has a TikTok account with over 9 million followers. Moreover, she and her husband also run a Youtube family account called ‘The LaBrant Fam’. The channel mainly consists of family vlogs and entertaining videos. The channel has seen rapid growth and as of late 2020, it has more than 12 million subscribers.

She is also a model and has been endorsing brands such as SugarBearHair, Frio The Label, Bio Clarity, Lucy Love, Target, Collab, CurelUS, and more.

What is the Net Worth of Savannah LaBrant?

According to sources, as of 2020, Savannah LaBrant has an estimated net worth of around $10 million. Her main source of income is Youtube and her social media accounts. Moreover, she earns a considerable amount of money from modeling career too.

How tall is Savannah LaBrant?

LaBrant stands at a height of 5 feet 3 inches and weighs around 50 kg. Her body measurements for breasts, waist, and hips are 32-24-32 inches. Her hair color is blonde and her eyes are blue in color.

On August 13, 2018, she and her husband uploaded a video titled “A GIANT FIRE MAKES US EVACUATE OUR HOUSE”. After uploading this video, the couple was accused on multiple social media platforms of faking an evacuation during the time of the fire. Later, the video was deleted.

Who is Savannah LaBrant married to? Husband, Kids

Savannah Labrant is married to her husband Cole LaBrant. The couple met each other in 2016 and after dating for around a year, the couple exchanged wedding vows on July 9, 2017. On December 28, 2018, they welcomed their child Posie Rayne. Recently, they gave birth to another child named Zealand in July 2020.

Talking about her past affairs, she was in a relationship with Tommie Smith. Even though this relationship did not last long and was ‘toxic’ according to herself, they did have a wonderful child from this marriage. Her name is Everleigh and she was born on December 14, 2012, when Savannah was just 19 years of age.

Our contents are created by fans, if you have any problems of Savannah LaBrant Net Worth, Salary, Relationship Status, Married Date, Age, Height, Ethnicity, Nationality, Weight, mail us at [email protected]