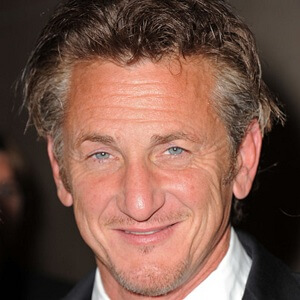 Sean Penn is an actor, director, screenwriter, and producer from America. He is popular for his breakout role in 1982 when he played Jeff Spicoli in Fast Times at Ridgemont High. Later his works included Dead Man Walking (1995) and She’s So Lovely (1997), and writing, producing, and directing The Crossing Guard (1995). He has two Academy Awards in the category of Best Actor.

Sean Penn was born on August 17, 1960, in Santa Monica, California to his parents, Leo Penn and Eileen Ryan. As of 2020, his age is 60. The actor holds a nationality of American and is under the zodiac sign, Leo.

His parents had ancestors from different countries. His grandmother was a Lithuanian Jew on her father’s side and his grandfather also was a Jew but from Russia. Sean’s parents are from the film industry as well. The actor has a younger sibling Chris who is a noted character actor as well. The children spent much of their free time together, making a number of amateur films shot with Super-8 cameras. Penn’s original intention was to attend law school, however, he ultimately skipped college and joined the Los Angeles Repertory Theater.

How did Sean Penn start his career as an actor and director?

Sean Penn made his professional debut on an episode of television’s Barnaby Jones. For the role, he relocated to New York, where he soon appeared in the play Heartland. Becoming a part of the movie industry was never easy for him. The guy played only episodic roles and was given technical work.

During this time period, Penn made his debut in the movie, starring in the multi-series film “Little House on the Prairie“. Then he went on to play small roles in short films. Later he finished school, he decided to go on tour with the theater, which lasted 2 years.

As a director, the actor made his debut with the 1991 drama “The Indian Runner”. Later he went on to direct The Crossing Guard, The Pledge, and Into the Wild. His latest work The Last Face was written by Erin Dignam.

After being such a successful actor and playing a couple of films. Sean won himself a couple of nominations at various award ceremonies. Penn finally won the ‘Academy Award’ for his role in the movie ‘Mystic River.’ The film received great appreciation and made an earning of about $156,822,020 at the box office worldwide.

He then went on to win his second ‘Academy Award’ for ‘Best Actor’ for portraying a gay politician in the movie ‘Milk’ in the year 2008.

What is the Net Worth of Sean Penn?

Currently, Sean Penn holds an estimated net worth of about $150 million. As a successful actor and a director, it is no surprise to hear about the fortune and all the earning he has made to date.

Talking about relationships, the actor has a huge history. Penn was initially engaged to actress Elizabeth McGovern, his co-star in Racing with the Moon (1984). He also had a brief relationship with Susan Sarandon.

In 1985, Sean Penn married his first wife Madonna, the couple met on the set of the least successful of his films “Shanghai Surprise”. They got divorced in the year 1989.

In 1996, Sean Penn married actress Robin Wright whom he on the set of the film “State of Grace”. The couple seemed very happy until 2010. The couple had 2 children – the daughter Dylan and the son Hopper. He still is in contact with his children.

At the beginning of 2014, the actor was so in love with Charlize Thero that he was going to marry her. But in the summer of 2015, they broke up.

Sean was in a relationship with actress Leila George since 2016 until he confirmed that he exchanged wedding vows with her on 4th August 2020. The star called it a ‘COVID wedding’.

How tall is Sean Penn?

The dashing actor stands tall at a decent height of 5 feet 8 inches. He has a weight of 79 kilograms. Talking about his shoe preference, he wears a shoe size of 8 (US). He has a slim body build. His body features a pair of blue eyes and dark brown hair.

Talking about social media, the actor isn’t very active on social media platforms. His Instagram profile includes 82.2k followers but has no posts to date. He goes by the username @SeanPenn on Twitter which he had joined in  November 2010. The actor usually tweets about various social events and his work events. The Twitter profile has garnered about 44.2 k followers.

Our contents are created by fans, if you have any problems of Sean Penn Net Worth, Salary, Relationship Status, Married Date, Age, Height, Ethnicity, Nationality, Weight, mail us at [email protected]