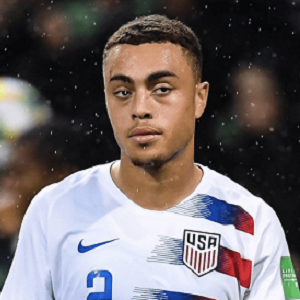 Sergiño Dest is a professional football player from the Netherlands who plays for the Dutch club Ajax and the United States national team. Dest is quite popular for playing as right back in the United States internationally at the senior level since 2019.

Where is Sergiño Dest from?

Sergiño Dest was born as Sergiño Gianni Dest on November 3, 2000, in Almere, Netherlands. He is Dutch by nationality and is currently 19 years old. Talking about his family and childhood, he was raised in the Netherlands but to disappointment, he has chosen the USA as his choice of country to represent at the international level.

He was born to a Surinamese-American father and a Dutch mother, besides this, there is no information about his family or his educational background. According to him, he first visited New York in 2014 and fell in love with the city. He holds both Dutch and American citizenship.

Which club does Sergiño play for?

As a young football player, Sergiño Dest played for the youth academy of Almere City FC until 2012, when he made the switch to the youth teams of Ajax. Dest slowly took his place on the rank board of the club, he later made his debut for Jong Ajax on October 15, 2018, Jong Ajax, in a 2–1 loss against Jong PSV. It was finally on July 27, 2019, Dest made his official debut for the Ajax first team.

There he started the 2019 Johan Cruyff Shield match, a derby against PSV Eindhoven. Ajax went on to win the match at a 2–0 score, and in consequence, the title. Likewise, in 2019, Dest debuted in the Eredivisie, making a replace to Noussair Mazraoui in the 54th minute of the Ajax 5–0 home win against FC Emmen.

In 2020, reports claim that Dest is close to joining FC Barcelona and has chosen to play for the Catalan club over the 2020 Treble Winners, FC Bayern Munchen.

Which country does he represent internationally?

How tall is Sergiño Dest?

As a professional athlete, it is no doubt that he keeps his physique well-maintained all year round. He stands with an average height of 5 feet 7 inches and weighs about 62 kilograms. Moreover, he has dark brown hair and a pair of dark brown eyes as well. However, there is no information on his chest-biceps-waist size and shoe size.

The 19-year-old star is sure to win the hearts of many fans through his skills and looks. It must be quite a disappointment for his fans to know that he is very single and isn’t engaged with anyone yet. As per his statement, he is not jumping on anyone other than his teammates for now. His love life will soon come to play, but till then it’s only football and him.

What is the Net Worth of Sergino Dest?

The star is making quite a name in the world of football and is moving up the ladders. According to the 2019 contract, the player signed a contract with Ajax Amsterdam that nets him a whopping salary of 500,000 Euro (423,000 Pound) per year. Moreover, he is sure to earn more money through his career, but for now, he has bagged a total net worth of about 100,000 Euro which is roughly $116k.

Socially, Dest is a verified celebrity on the Instagram platform. He goes by the username @sgd_2 amassing more than 171K followers. However, he isn’t available on other social media sites such as Facebook, Twitter, and YouTube.

Our contents are created by fans, if you have any problems of Sergiño Dest Net Worth, Salary, Relationship Status, Married Date, Age, Height, Ethnicity, Nationality, Weight, mail us at [email protected]