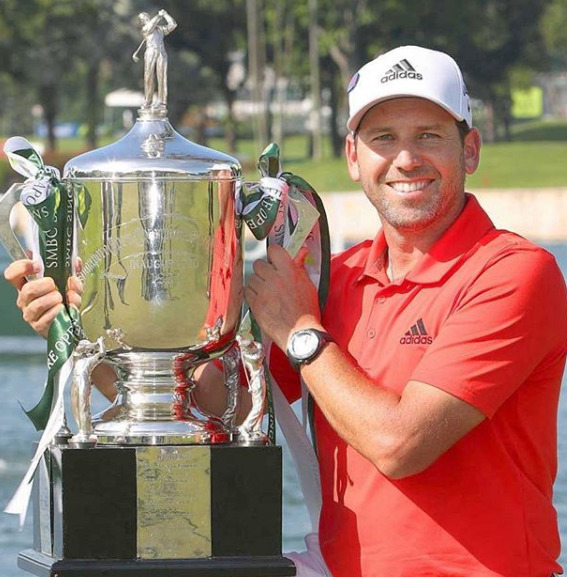 Sergio Garcia is a professional Spanish golfer. He is widely recognized as the winner of ‘The Players Championship’ in 2008. He plays on both the PGA Tour and the European Tour. He is one of the highest-paid and highest-earning golfers of Spain.

Sergio Garcia was born as Sergio García Fernández in Borriol, Castellón, Spain. He holds a Spanish nationality and he is of Spanish ethnicity. His birth sign is Capricorn.
He is the son of Victor Garcia (father) and Consuelo Fernandez (mother). He has two siblings named Victor Garcia and Mar Garcia Fernández. His father is a club professional in Madrid. His father was the one who taught him golf in his childhood. He began playing golf at the age of three and at first, he played under his father. There is no information about his educational background and childhood life.

Career and Achievements of Sergio Garcia

Net Worth of Sergio Garcia

Not only the name and fame, but Sergio Garcia has also earned tremendous wealth through his professional golfing career. As of 2010, his net worth is estimated to be $70 million. But his salary was not disclosed yet.

Sergio Garcia has been in few relationships till now. His four relationships have been exposed to the media till today. Once, he was in a relationship with the famous female golfer, Katharina Boehm. There is no information about their dating history. After being together for a few years, they broke up and he started dating Morgan Norman. He again failed to keep their relationship and they ended with a breakup. After that, he began dating the beautiful Swiss tennis player, Martina Hingis in early 2001. They stayed together for over a year and they broke up in 2002. After his breakup with Martina, Sergio stayed single for a long period of time.

It’s our first Christmas with our little girl and it couldn’t be any better! Can’t wait to see her grow up and create some amazing memories together. Merry Christmas Y’all!!

At the end of 2015, he began dating Angela Akins. After dating each other for more than a year, the couple got engaged in 2017 and they decided to become man and wife in July 2017 when they got married in a private event in Texas which was attended by their families and close friends. The family got a new member when it gave birth to its first child, Azalea Adele Garcia who was born on March 14, 2018. The golfer is currently happy with his wife and children as there are no rumors of divorce or any extramarital affairs.

Sergio Garcia has a height of 5 feet 10 inches. His body weighs 82 kg. He has dark brown hair and green eye. His other body measurements like chest, biceps, waist sizes will be updated soon.

Our contents are created by fans, if you have any problems of Sergio Garcia Net Worth, Salary, Relationship Status, Married Date, Age, Height, Ethnicity, Nationality, Weight, mail us at [email protected]