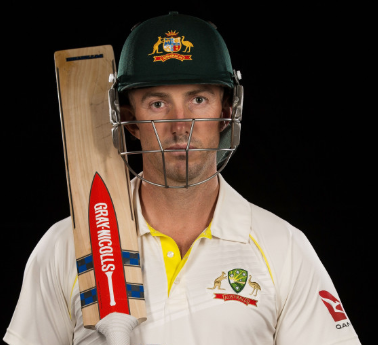 Born as Shaun Edward Marsh, he is one of the Australian cricketers best known for playing for the Western Warriors. He has represented his national team in various cricket categories games like Test, One Day International (ODI), and Twenty20 levels. The Australian player plays as an opening left-handed batsman and is also champ as the spin bowler. He has been nicknamed as Son of Swampy, in short SOS. According to Shaun Marsh wiki, he was born on 9 July 1983, which makes his age be 36 years old. Let’s explore in detail Shaun Marsh’s biography below.

Marsh has been ruled out of the rest of the World Cup after sustaining a fractured forearm facing Pat Cummins in the Old Trafford nets. The 36-year-old needs surgery with no time frame yet set for his return. Marsh is due to link up with Glamorgan for the rest of the season if he is not involved in the Ashes series. The Australian was due to start his second year as Glamorgan’s all-format overseas player at the end of the World Cup. Marsh and his brother Mitchell were signed for Glamorgan’s T20 campaign which starts on Thursday, 18 July, while Glamorgan is pushing for County Championship promotion as they currently top Division Two.

“It’s terrible news for Shaun to miss out on the latter stages of the World Cup and we wish him a swift recovery,” said Glamorgan director of cricket Mark Wallace. “We will continue to monitor Shaun’s situation closely over the coming days but we are still hopeful he will be able to play a part in our Vitality Blast campaign and our promotion push in the County Championship.”

There was an outside chance Marsh could have been involved in the Ashes squad, with the first England and Australia Test starting on 1 August. Marsh and younger brother Mitchell were dropped for Australia’s most recent Test series against Sri Lanka. Glamorgan is waiting to see if their Australia players are available for the start of their T20 campaign against Somerset in Cardiff on 18 July, before facing Gloucestershire the following day.

Mitchell Marsh will miss the first four games of the T20 tournament with Glamorgan because he is currently involved in an Australia A tour of England. The tour overlaps with the Welsh county’s opening quartet of fixtures in the T20 Blast, with an Australia versus Australia A fixture in Southampton between 23 and 26 July acting as an Ashes warm-up.

This game clashes with Glamorgan ties at Surrey on 25 July and a home game against Middlesex a day later. Glamorgan’s current in-form overseas player Marnus Labuschagne is also likely to be involved in the Ashes trial match and the county is waiting to see if he could cover the start of the T20 tournament and even beyond.

Shaun Edward Marsh also is known as Shaun Marsh is an Australian cricketer. He was one of the profound batsmen in the Australian team. Marsh was an unfathomable player and his batting is difficult to understand.

Who are the parents of Shaun Marsh?

Back to his early life, Shaun Marsh was born in Narrogin, Western Australia. He was born to Michelle Marsh and Geoff Marsh, a former cricketer, Coach, and worked as a selector in the Australian Cricket Board. He has two siblings; a brother Mitchell Marsh, a cricket player, and a sister Melissa Marsh, a former basketball player.

There is no information available regarding his education details. Further, He follows Christianity and his birth sign is Cancer.

When did Shaun Marsh pursue his cricket career?

What are the achievements of Shaun Marsh?

Does Shaun Marsh was married?

Reflecting on his personal life, Shaun was a married man. He married his longtime girlfriend Rebecca O’Donovan. She is a professional Journalist in Australia. She participated in the Miss Universe contest as well. They were in a relationship since 2013 and got married in 2015. The couple blessed two babies. At present, the couple lives a blissful life without any rumors about their two children.

How much net worth is Shaun Marsh owns?

Shaun Marsh’s net worth has grown significantly in 2019. According to many Online resources, Shaun Marsh’s estimated net worth said to be 4 million USD which is not confirmed.

As per the Cricket Australia Central Contracts (2016-2017), Shaun Marsh is paid the salary as a retention fee which amounts to Australian dollar 900,000. Further, he is paid AU$14,000 per test match that he plays. He is offered $7,000 and $5,000 per ODI and T20 match respectively. Apart from the above-mentioned salary, Shaun Marsh also generates income as a bonus for his performances. His per match fee can get double when Marsh scored a century.

How tall is Shaun Marsh?

Observing his body statistics, Shaun stands a height of 6 feet 1 inch and weighs around 80 kg. He has an athletic body build with 42-34-14 inches body measurements. He has green eyes and brown hair color.

Our contents are created by fans, if you have any problems of Shaun Marsh Net Worth, Salary, Relationship Status, Married Date, Age, Height, Ethnicity, Nationality, Weight, mail us at [email protected]