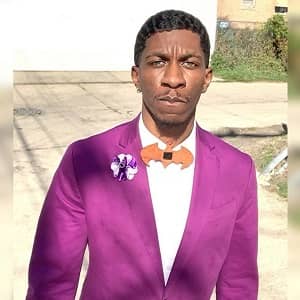 Sir Cruse is a popular American Youtuber and social media personality. He rose to fame thanks to his informational and reaction videos related to the popular waves hairstyle on his Youtube channel.

When was Sir Cruse born?

Sir Cruse, real name William Cruse Jr., was born on the 9th of November, 1991 in Chicago, Illinois, U.S.A. As of 2020, his age is 29. His nationality is American and his ethnicity is African American.

Sir Cruse was born to parents William Cruse Sr. (father) and Valerie Cruse (mother). He is the middle child of the family as he has an older and a younger sibling. He was raised alongside younger brother Terrance and the two are very close.

Talking about his education Sir Cruse is a college graduate. He graduated from DeVry University in 2015 with a degree in computer engineering.

How did Sir Cruse build his career?

Sir Cruse actually started his channel quite early in August of 2007. His first videos weren’t doing quite well and he wasn’t putting too much thought or effort into them. But this all changed in 2012 when he started uploading hair related content on Youtube. Hairstyles and particularly the 360 waves hairstyle is something Sir Cruse is passionate about and he began giving tips as to how one can get waves easily. As most contents on the subject weren’t very detailed, his videos were loved by the audience very much.

He uploaded a lot of content on hair, from tutorials to tips and even a couple of reaction videos. His instructions and explanations were simple and to the point and his videos were also entertaining. Fans also began to love his personality and he blew up on the platform.

As of now, Sir Cruse has over 55k subscribers on his Youtube channel. His content is still mostly about hair but he has also started doing live streams a lot nowadays. On top of his popularity on Youtube, Sir Cruse is also a personality on Instagram. As of now his good looks, likable personality and popularity have helped him amass over 364k followers on Instagram. He is also active on Tiktok where he posts funny duets and reactions quite frequently. His content was loved on the platform and he has already gained over 398k followers on his account.

What is Sir Cruse’s net worth?

Sir Cruse has not revealed his exact net worth and annual salary as of now. Unfortunately, there are also no reliable estimates of these figures right now.

What are Sir Cruse’s physical statistics?

Sir Cruse stands at a height of 5 feet 8 inches and his weight is roughly 65 kilograms. He is blessed with good looks on top of a slim and fit physique. His hair is black and he has light brown eyes.

Who is Sir Cruse dating?

Sir Cruse is currently in a relationship with his girlfriend, Jazzy Glimmer. Jazzy is a fellow Youtuber as well and the two have been going strong since their relationship started in 2019. The fans also love the couple and they have great chemistry with each other. Cruse has not revealed his past relationships as of now.

Sir Cruse is active and popular on social media. His likable personality along with his popularity on Youtube has helped him gain a lot of followers. As of now, Sir Cruse has over 364k followers on Instagram, over 2.7k followers on Twitter, and over 500 followers on Facebook.

Our contents are created by fans, if you have any problems of Sir Cruse Net Worth, Salary, Relationship Status, Married Date, Age, Height, Ethnicity, Nationality, Weight, mail us at [email protected]