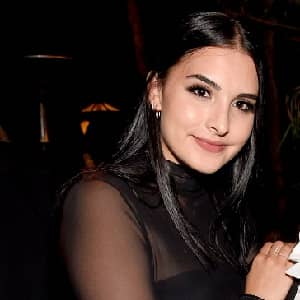 Sophia Umansky is famously known as the daughter of Kyle Richards who is an American actress, television celebrity, socialite. She was part of the reality-Tv show, The Real Housewives of Beverly Hills from 2010-2020.

Sophia Umansky was born on 18th January 2ooo in Los Angeles, California. She is currently 21 years old as of 2021. Likewise, her birth sign is Capricorn. She holds the citizenship of America and belongs to a mixed ethnic background.

Moreover, she is one of three children born to parents Kyle Richards and her husband Mauricio Umansky. She also has a half-sister named Farrah Aldjufrie. Farrah was only the child born from Kyle Richards’ married life with Guraish Aldjufrie. Kyle Richards married Guraish in 1998 and later got divorced in 1992. Four years later, she married Sophia’s father Mauricio who is a real state agent.

Talking about her educational background, she joined Windward school located in Los Angeles California, back in 2012. She eventually graduated from there in 2018. And currently, she is pursuing her college studies at Georgia Washington University, Washington DC.

More about her mother Kyle Richards

Kyle Richards is an American actress, television personality, socialite and philanthropist. She earns for her appearance on the Bravo television reality series, The Real Housewives of Beverly Hills. She began her career as a child actress. Moreover, she made appearances in several horror movies such as The Car, Halloween.|

Likewise, she also was nominated for three Young Artist  Awards from 1982-1985. Talking about her earnings from her professional career she bags up a net worth of around $100 million.

How did Sophia Umansky pursue her career?

Sophia Umanksy is popularly noted for her long-haul association with the Bravo TV reality show, The Real Housewives of Beverly Hills. Sophia appeared on the show for 10 years alongside her mother Kyle and sister Alexia. It is an American reality TV series that premiered on October 14, 2010, on Bravo. It has aired a total of ten seasons with six installments and focuses on the personal and professional lives of several women residing in Beverly Hills, California. The current cast of the show consists of her mother Kyle Richards, Erika Girardi, Lisa Rinna, Dorit Kemsley, Crystal Kung Minkoff, and Garcelle Beauvais while Sutton Stracke and Kathy Hilton serve as friends of the housewives

Besides that, she is currently focused on her studies which keeps her away from the media limelight. There is no doubt that she will attract more offers in near future.

Sophia is currently single as of now and is not dating anyone. Furthermore, there is no information about her past affairs. She hasn’t been involved in any sort of controversies and scandals that might harm her career. As of now, this beautiful lady is single and happy and is living with her parents.

What is the Net worth of Sophia Umansky?

Sophia Umansky is currently studying at the university. Currently, she hasn’t been involved in any kind of profession so her income source is not available. However, her parents are rich.

Sophia is a tall and beautiful girl. She stands 5 feet 7 inches tall and weighs around 48kg. Likewise, she has got black hair and brown eyes. Furthermore, there is no information regarding her waist size, hip size, dress size and shoe size.

Our contents are created by fans, if you have any problems of Sophia Umansky Net Worth, Salary, Relationship Status, Married Date, Age, Height, Ethnicity, Nationality, Weight, mail us at [email protected]