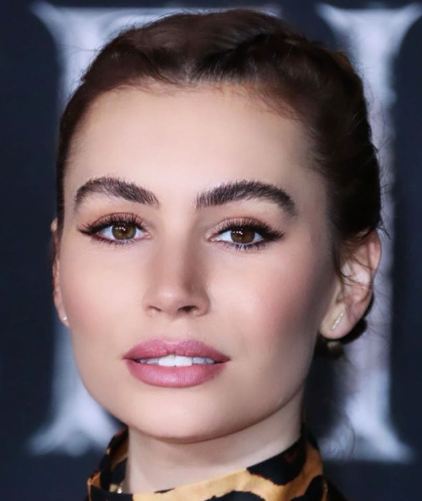 Born in the celebrity family Sophie Simmons is a popular singer, model as well as reality TV star. She first entered the world of the entertainment industry at the age of 11 years old. Her appearances in the TV shows, as well as some short films, includes Gene Simmons Family Jewels, The X Factor, and Shannon & Sophie. Let’s know more about her through this article.

Where is Sophie Simmons famous for?

An American and Canadian singer, television personality, advocate for children, and model who promotes body positivist.

Where is Sophie Simmons born?

Recalling his early life, Sophie was born in Los Angles, California to Shannon Tweed and Gene Simmons. Her mother is a Canadian actress and a model and her father is an Israeli-American musician who was one of the lead singers of Kiss.

She holds dual citizenship; American and Canadian. She has one brother named Nick Simmons. She was born under the birth sign of Cancer.

Which college did Sophie Simmons attend?

What does Sophie Simmons do?

Talking about her profession, Sophie began appearing on the reality television series Gene Simmons Family Jewels on A&E in her early days.

In 2014, She launched a body-positive clothing line for The Style Club. She became a model, an advocate for body positivity. She was also featured in the 2016 documentary Straight/Curve which focuses on the debate over body image in modeling.

In 2015, She released her debut single, Kiss Me, a cover of the Sixpence None The Richer’s 1998 song by the same name. In March 2017, she collaborated with the DJ duo Yellow Claw for a song on their second studio album, Los Amsterdam. She is the lyricist and vocalist on the album’s first track, Home.

In early 2018, she released two solo singles, Black Mirror and Burn Me Down. The music video for Black Mirror was released on February 23rd on Billboard.

Written by Simmons a year earlier, the song, like the television show from which it gets its name, deals with people’s relationships with their smartphones and social media. Black Mirror debuted on Billboard’s Dance Club Songs chart at Number 43 on April 14th. The song remained on the list for ten weeks peaking at Number 20.

In June 2018, she released her third solo single of the year, Paper Cut.

Reflecting on her personal life, Sophie is yet to be married. Also, she is not dating anyone. As per various sources, she was dated by Christopher James from her college days. But it was not confirmed yet. Presently, she seems to be Single at present.

What is Sophie Simmons worth?

Being a reality TV star and fashion model, Sophie earns a decent amount of money and fame through her profession in the field of the entertainment industry. Based on some online sites, her estimated net worth said to be $10 million at present. However, her salary and asset details are yet to be disclosed.

How tall is Sophie Simmons?

Observing her body physics, Sophie stands a height of 5 feet 8 inches and weighs around 58 Kg. Similarly, she has a pair of light brown eyes and hair color. Further, her shoe size is 9.5 (US) inches and the dress size is 10 (US).

Our contents are created by fans, if you have any problems of Sophie Simmons Net Worth, Salary, Relationship Status, Married Date, Age, Height, Ethnicity, Nationality, Weight, mail us at [email protected]