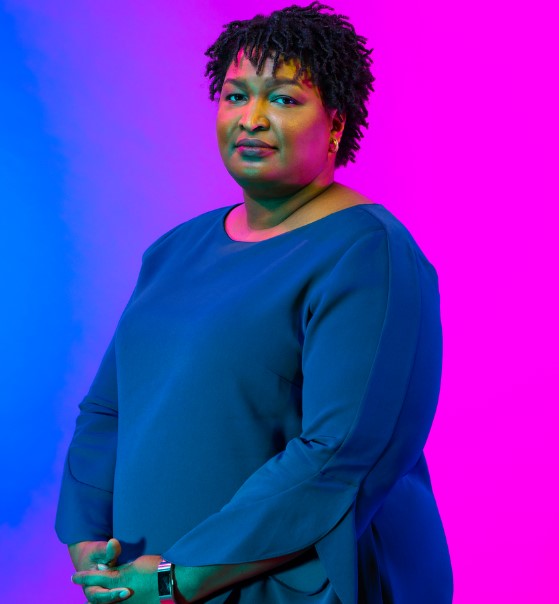 Stacey Yvonne Abrams popularly known as Stacey Abrams is an American politician, lawyer, and author who is the House Minority Leader for the Georgia General Assembly and State Representative for the 89th House District. She is the first woman to lead either party in the Georgia General Assembly and is the first African-American to lead in the House of Representatives. She is a member of the Democratic Party and was nominated by the party in the 2018 Georgia gubernatorial election but lost to Brian Kemp. Abrams was the first African-American female major-party gubernatorial nominee in the United States. Besides, she became the first African-American woman to deliver a response to the State of the Union address In February 2019. Abrams has also founded a company that helps small businesses to grow. As Selena Montgomery, Abrams has creatively written many books such as Lead From The Outside, Our Time is Now, etc. Abrams received the John F. Kennedy New Frontier Award from the Kennedy Library and Harvard University’s Institute of Politics.

Where was Stacey Abrams Born?

Abrams was born on 9th December 1973 in Madison, Wisconsin to Robert and Carolyn Abram. She has five siblings. Though Abrams was born in Madison, she was raised in Gulfport, Mississippi. She along with her family moved to Atlanta, Georgia, where her parents pursued graduate degrees and later became Methodist ministers. She attended Avondale High School, where she was selected for a Telluride Association Summer Program. She was hired as a typist for a congressional campaign when she was in high school and when she was 17 years old, she was hired as a speechwriter based on the edits she made while typing.

Abrams acquired the Bachelor of Arts in interdisciplinary studies (political science, economics, and sociology) from Spelman College in 1995.

As a Harry S. Truman Scholar, Abrams studied public policy and acquired a Master of Public Affairs degree from the University of Texas at Austin’s LBJ School of Public Affairs in 1998. Further, in 1999, she earned a Juris Doctor from Yale Law School.

In 2002, Abrams was appointed the deputy city attorney for the City of Atlanta at the age of 29.

She served in the Georgia House of Representatives from 2007 to 2017 and served as minority leader from 2011 to 2017. On August 25, 2017, Abrams resigned from the General Assembly to focus on her gubernatorial campaign.

On May 22, 2018, she won the Democratic nomination, becoming the first black woman in the U.S. to be a major party’s nominee for governor. After winning the primary, Abrams secured a number of high-profile endorsements, including one from former President Barack Obama. But Abrams lost the election by 50,000 votes and Abrams has repeatedly claimed that the election was not fairly conducted.

On January 29, 2019, Senate minority leader Chuck Schumer (D-NY) announced that Abrams would deliver the response to the State of the Union address on February 5.

She was the first African-American woman to give the rebuttal to the address, as well as the first and only non-office-holding person to do so since the SOTU responses began in 1966.

On August 17, 2019, Abrams announced the founding of Fair Fight 2020, an organization that will assist Democrats financially and technically to build voter protection teams in 20 states. Abrams is Fair Fight Action 2020’s chair.

After graduating from law school, Abrams worked as a tax attorney at the Sutherland Asbill & Brennan law firm in Atlanta, focusing on tax-exempt organizations, health care, and public finance. In 2010, being a member of the Georgia General Assembly, Abrams co-founded and served as the senior vice president of a financial services firm NOW Corporation (former NOWaccount Network Corporation). Similarly, Abrams also co-founded a beverage company Nourish, Inc., focusing on infants and toddlers, and is CEO of Sage Works, a legal consulting firm that has represented clients including the Atlanta Dream of the WNBA.

Regarding writing career, Abrams has published many articles regarding public policy, taxation, and non-profit organizations. With a pen name Selena Montgomery, Abrams is the award-winning author of several romantic suspense novels. According to Abrams, she has sold more than 100,000 copies of her novels. Montgomery won both the Reviewer’s Choice Award and the Reader’s Favourite Award from Romance In Color for Best New Author and was also featured as a Rising Star.

Abrams is the author of ‘Minority Leader: How to Lead from the Outside and Make Real Change’, published by Henry Holt & Co. in April 2018. She is expected to publish her next book ‘Our Time Is Now: Power, Purpose, and the Fight for a Fair America’ on June 9, 2020’.

In 2006 she was named a ‘Georgia Rising Star’ by Atlanta Magazine and Law & Politics Magazine.

In 2012, Abrams received the John F. Kennedy New Frontier Award from the Kennedy Library and Harvard University’s Institute of Politics, which honors an elected official under 40 whose work demonstrates the impact of elective public service as a way to address public challenges.

In 2014, Governing Magazine named her a ‘Public Official of the Year’, which is an award that recognizes state and local officials for outstanding accomplishments.

In 2014, EMILY’s List recognized Abrams as the inaugural recipient of the Gabrielle Giffords Rising Star Award. She was selected as an Aspen Rodel Fellow and a Hunt-Kean Fellow.  She was also named as ‘11 on The Root 100 by The Root’.

Abrams received the ‘Georgia Legislative Service Award’ from the Association County Commissioners Georgia, the ‘Democratic Legislator of the Year’ from the Young Democrats of Georgia and Red Clay Democrats, and an ‘Environmental Leader Award’ from the Georgia Conservation Voters.

She is a lifetime member of the Council on Foreign Relations, a Next Generation Fellow of the American Assembly, an American Marshall Memorial Fellow, a Salzburg Seminar–Freeman Fellow on U.S.-East Asian Relations and a Yukos Fellow for U.S.–Russian Relations.

Who is Stacey Abrams Married to?

In April 2018, Abrams wrote an op-ed for Fortune and revealed that she owed $54,000 in federal back taxes and held $174,000 in credit card and student loan debt.  Abrams was repaying the IRS incrementally on a payment plan after deferring her 2015 and 2016 taxes, which she stated was necessary to help with her family’s medical bills. During the 2018 Georgia gubernatorial election, Abrams donated $50,000 to her own campaign. Later in 2019, she completed payment of her back taxes to the IRS in addition to other outstanding credit card and student loan debt reported during the gubernatorial campaign.

What are Stacey Abrams Body Measurements?

Stacey Abrams, who was born on 9 December 1973, is 46 years old as of today’s date 27th April 2020. She stands at a height of 160 cm and weighs 83 kg. Information regarding body measurement, shoe size, and dress size is not available. She has defined her body as sturdy. She has black hair and black eyes.

What is Stacey Abrams Net Worth?

Stacey Abrams’ assets have been added up to about $520,000, including a townhouse in Atlanta and a book advance. In terms of money, she only had about $11,000 in cash and bank accounts. But she’s had a good salary as a lawyer and collects money from her writings as well.

Our contents are created by fans, if you have any problems of Stacey Abrams Net Worth, Salary, Relationship Status, Married Date, Age, Height, Ethnicity, Nationality, Weight, mail us at [email protected]