Steve Jobs was an American businessman, entrepreneur, and investor. 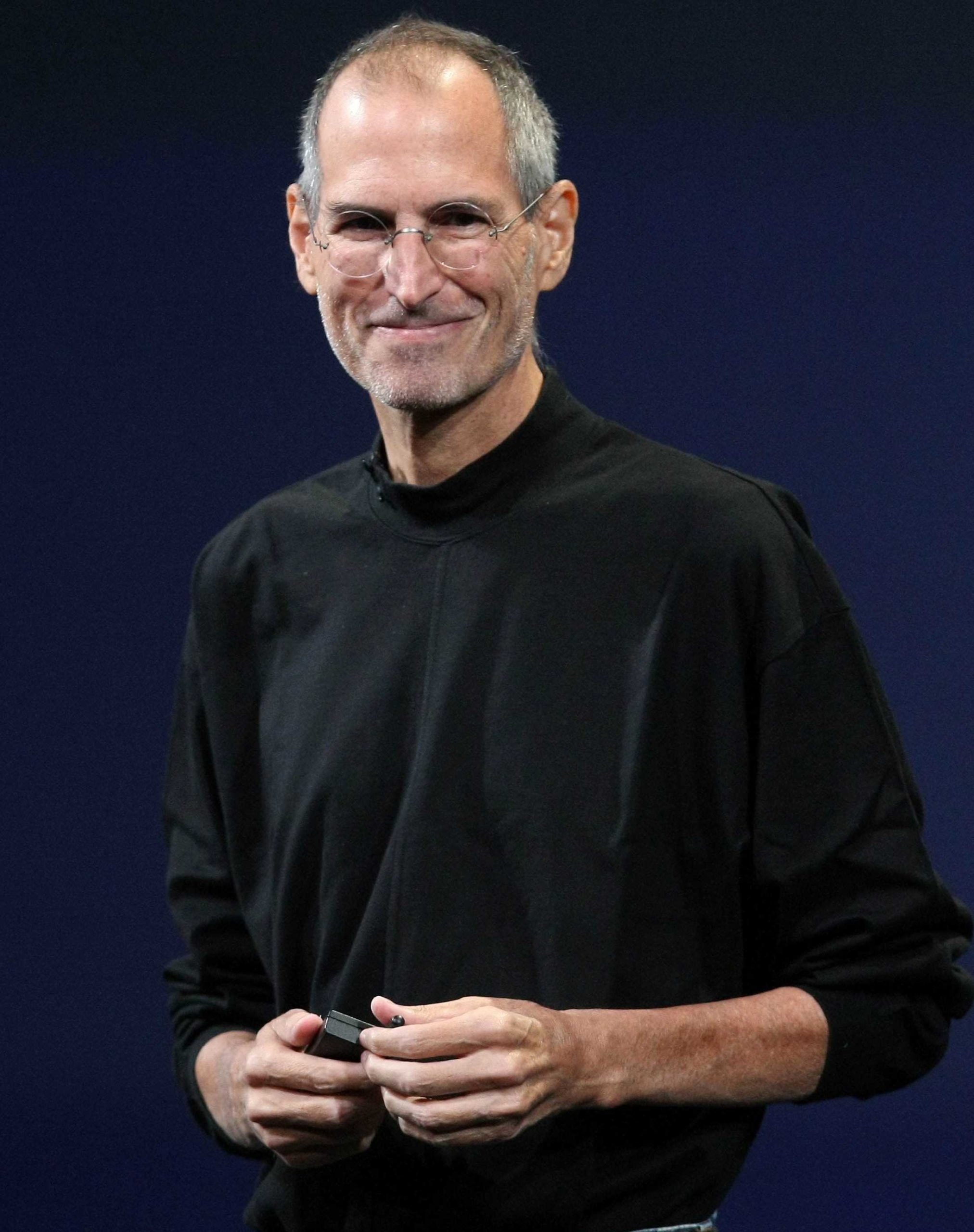 Steven Paul Jobs, popularly known as Steve Jobs was an American businessman, entrepreneur, and investor. He was the chairman, chief executive officer (CEO), and co-founder of Apple Inc. He was also the chairman and majority shareholder of Pixar and the founder, chairman, and CEO of NeXT. He is widely recognized as a pioneer of the microcomputer revolution of the 1970s and 1980s. He is the co-creator of the Macintosh, iPod, iPhone, iPad, and first Apple Stores. He died of pancreatic cancer on 5 October 2011. He died aged 56.

What is Steve Jobs Famous For?

Where was Steve Jobs Born?

Steve Jobs was born on 24 February 1955. His birth name is Steven Paul Jobs. His birth place is in San Francisco, California in the United States. He held American nationality. He was born to a father, Abdulfattah “John” Jandali, and a mother, Joanne Schieble. He has a biological sister, Mona Simpson. He was then adopted by Paul Reinhold Jobs and Clara Jobs. His adoptive father was a Coast Guard mechanic and later became a car mechanic. Clara had an ectopic pregnancy that led them to adoption and they adopted Jobs. His adoptive parents adopted Patricia in 1957. He was deeply involved in electronics by the age of 10. He had befriended many engineers who lived in the neighborhood.

The family moved to Crist Drive in Los Altos, California, where he attended Homestead High School. He met his future partner, Steven Wozniak there. Wozniak began attending the University of Califonia, Berkeley and Jobs started to study in nearby Stanford University’s student union. He was also interested in arts in his student years. He was working on an underground film project with his then-girlfriend Chrisann Brennan. After graduation in 1972, he enrolled at Reed College in Portland, Oregon. He dropped out of Reed. His then-girlfriend Brennan supported him on his decisions.

Jobs moved back to the San Francisco Bay Area in the mid-1973, where he rented an apartment.

Wozniak designed his version of the classic video game Pong in 1973. Jobs took the game to Atari, Inc. Atari thought that Jobs had built it and they offered him a job as a technician.

He traveled to India in search of spiritual enlightenment with Daniel Kottke in mid-1974 to visit Neem Karoli Baba. The Baba had died in September 1974. They went to an ashram of Haidakhan Babaji.

He returned to the US after seven months. He had his head shaved and wore traditional Indian clothing. He experimented with LSD during this time. He spent a period at the All One Farm in Oregon.

He and Brennan both became practitioners of Zen Buddhism through the Zen master Kobun Chino Otogawa.

He returned to Atari, where he created a circuit board for a video game with the help of his friends, Wozniak.

Jobs and Wozniak attended meetings of the Homebrew Computer Club in 1975. It became a milestone to the development and marketing of the first Apple computer.

Wozniak designed and developed the Apple I computer in 1976. Jobs, Wozniak, and Ronald Wayne then founded Apple Computer in the garage of Job’s Los Altos home on Crist Drive. Wayne left the team shortly.

The two decided on the name “Apple” after Jobs returned from the All One Farm commune in Oregon and told Wozniak about his time spent in the farm’s apple orchard.

Jobs and Wozniak introduced the Apple II at the West Coast Computer Faire in 1977.

Jobs, Brennan, and Daniel Kottke moved into a house near the Apple office in Cupertino in 1977. Jobs-Brennan relationship got complex as she was pregnant with Job’s child. She gave birth to a daughter in May 1978.

His Apple Lisa (Local Integrated Software Architecture” was named after his daughter.

Apple recruited Mike Scott from National Semiconductor to serve as CEO in 1978. He offered John Sculley of Pepsi-Cola to serve as Apple’s CEO in 1983.

Apple introduced the Macintosh, based on The Lisa in early 1984. Macintosh was a hard sell because it was expensive.

Bill Gates’s then-developing company, Microsoft and Apple had clashed over the similarities between the Windows GUI and the Mac Interface.

The Macintosh introduced the desktop publishing industry in 1985 with the addition of Apple LaserWriter, the first laser printer to feature vector graphics.

Sculley and Jobs’s vision started deviating. Sculley planned to remove Jobs from the Macintosh group and put him in charge of “New Product Development”. Jobs planned to get rid of Sculley and take over Apple. Jobs resigned from Apple in September 1985. Five additional senior Apple employees also resigned and joined Jobs in his new venture, NeXT.

Jobs founded NeXT with a few of Apple’s members in the same year. He started the company with $7 million.

NeXT specialized in computers for higher-education and business markets.

The revised, second-generation NeXTcube was released in the same year.

English computer scientist Tim Berners-Lee invented the World Wide Web using the NeXT computer in 1990 at CERN in Switzerland.

NeXT transitioned fully to software development in 1993 after they released NeXTSTEP/Intel.

The company released a framework for Web applicant development, WebObjects in 1996.

Jobs developed the visual effects industry when he funded the computer graphics division of George Lucas’s Lucasfilm in 1986. The new company was Pixar.

Pixar, in partnership with Disney, produced the first 3D computer-animated film Toy Story in 1995. Jobs was credited as executive producer of the film.

He worked to bring revolution in Apple developing several technologies.

The original Mac OS was replaced with a completely new Mac OS X, based on NeXT’s NeXTSTEP platform in 2001. It gave OS a modern Unix-based foundation for the first time.

He was diagnosed with cancer in 2003 that led to the deterioration in his health. Tim Cook served as acting CEO of Apple.

He returned to Apple following the liver transplant.

He announced his resignation as Apple’s CEO in August 2011. Tim Cook became his successor and he became chairman of the board.

He worked for Apple until the day before his death on 5 October 2011.

1985: National Medal of Technology (with Steve Wozniak), awarded by US President Ronald Reagan

1989: Entrepreneur of the Decade by Inc. magazine

2007: Named the most powerful person in business by Fortune magazine

2007: Inducted into the California Hall of Fame, located at The California Museum for History, Women and the Arts

2012: Grammy Trustees Award, an award for those who have influenced the music industry in areas unrelated to performance

2013: Posthumously inducted as a Disney Legend

Who is Steve Jobs Married to?

Steve Jobs was married to Laurene Powell. The couple got married in 1991. They first met in 1989 when Jobs gave a lecture at the Stanford Graduate School of Business. She was a student there. Jobs approached her after the lecture and invited her to dinner. Jobs proposed to her on New Year’s Day 1990. They later tied a knot to each other on 18 1991 in a Buddhist ceremony at the Ahwahnee Hotel in Yosemite National Park. Their first child, Reed was born in September 1991. The couple had two more children, Erin and Eve.

His first girlfriend is Chrisann Brennan, whom he met while at Homestead High School. Brennan was an integral part of Jobs’s life from what he started to what he was set to achieve in the coming future. They had an on-and-off relationship with each other. He had his first child, a daughter, Lisa Brennan, with Brennan in May 1978. Though Jobs denied paternity, a DNA test proved Jobs as Lisa’s father. Jobs had to pay $385 a month to Brennan for their daughter. Instead, Jobs gave her $500 a month. His Apple Lisa (Local Integrated Software Architecture” was named after his daughter.

Jobs was diagnosed with a pancreatic neuroendocrine tumor in 2003. He resisted medical intervention for nine months after the diagnosis. He tried a vegan diet, acupuncture, herbal remedies, and other treatments he found online. He finally had surgery in 2004. He did not receive chemotherapy or radiation therapy.

His health started deteriorating over the years. Tim Cook, who previously acted CEO in Job’s 2004 absence due to surgery, became the acting CEO of Apple in 2009 after Jobs took six-months to leave of absence. Tim Cook offered a portion of his liver to Jobs in 2009. They both shared a rare blood type. But, Jobs refused. He underwent a liver transplant at Methodist University Hospital Transplant Institute in Memphis, Tennessee in April 2009.

He died on 5 October 2011 aged 56 due to respiratory arrest related to the tumor. He died with his wife, children, and sisters at his side at his Palo Alto, California home. His final words were, ‘Oh wow. Oh wow. Oh wow’. He worked for Apple until the day before his death.

A small private funeral was held on 7 October 2011. The details of his funeral were not made public, out of respect for Jobs’s family. Apple, Microsoft, and Disney flew their flags at half-staff. He is buried in an unmarked grave at Alta Mesa Memorial Park in Palo Alto.

How much is Steve Jobs worth?

Steve Jobs had a net worth of over $10 billion at the time of his death. His widow, Laurene Powell inherited his fortune. Today, Laurene Powell is worth $21.4 billion. He was worth $1 million in 1978. He was just 23 years old. His net worth grew to over $250 million by the time he was 25. He was one of the youngest “people ever to make the Forbes list of the nation’s richest people”. He won 141 patents since his death. He currently holds over 450 patents. If Jobs had still been alive, his fortune would have crossed trillion.

Our contents are created by fans, if you have any problems of Steve Jobs Net Worth, Salary, Relationship Status, Married Date, Age, Height, Ethnicity, Nationality, Weight, mail us at [email protected]