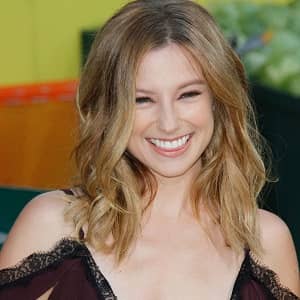 Sugar Lyn Beard is a Canadian actress, voice actress and TV and radio personality. Her radio host persona is called ‘Suga BayBee’ and she was called ‘Sugar’ as co-host of ‘The Zone’. As an actress, she is known for her works in ‘Mike and Dave Need Wedding Dates’, ‘Sausage Party’, and ‘50/50’.

How old is Sugar Lyn Beard?

Sugar Lyn Beard was born as Stephanie Lyn Beard on August 27, 1981, in Scarborough, Ontario, Canada. As of 2020, her age is 39. She was born to parents Jeffrey Charles Stone (father) and Krista Jean Stone (mother). Lyn grew with her brother named Spencer.

How did Sugar Lyn Beard pursue her career?

Sugar began her career on radio, working for the KISS 92.5, a Toronto-based radio station when she was just 19. Moreover, she also worked as a sales clerk, before getting a breakthrough as her famous Suga BayBee character on the ‘Mad Dog and Billie’ morning show on KISS.

In 2000, she got a famous role as Sailor Mini Moon in the Cloverway adaptation of Sailor Moon. After her role as Sailor Moon, in 2001, Beard hosted and produced ‘The Zone’, a series of short interstitial segments that aired on the Canadian children’s network YTV till 2007. Moreover, she also hosted other programs like ‘Sugar & Avril: A Zone Special’ among others. Along with Carlos Bustamante, she hosted a weekly hour-long program, ‘Plugged In’. Lyn also had a column in ‘Brand New Planet’, a youth newspaper that distributed subscriptions to the Toronto Star.

In 2011, Sugar was cast in the film ‘50/50’, starring Joseph Gordon-Levitt and Seth Rogan which was based on inspiration received from the writer Will Reiser’s experience with cancer. The movie became famous for its screenplay and Gordon-Levitt’s performance and grossed over $41 million at the box office. In 2012, she portrayed Krissy in the movie, ‘For a Good Time, Call…’, a comedy movie in which she co-starred with Ari Graynor and Lauren Miller Rogen.

In 2016, she played Jeanie in the comedy movie, ‘Mike and Dave Need Wedding Dates’. The same year, she gave voices to baby carrots and cookies in ‘Sausage Party’. Her most recent work in a movie came in the 2020 movie, ‘Unpregnant’ as Kate.

How tall is Sugar?

Sugar Lyn Beard stands at a height of 5 feet 3 inches and weighs around 47 kg. Her body measurements for breasts, waist, and hips are 34-27-33 inches. She has brown hair and a pair of brown eyes.

What is the Net Worth of Sugar Lyn Beard?

Sugar Lyn Beard has an estimated net worth of around $3 million as of 2020. She has earned a good sum of money from her career as an actress, host, and TV personality.

Is Sugar Lyn Beard dating anyone?

As of 2020, Sugar seems to be single. She has always been very private regarding her dating life and many even claimed that she is a lesbian after not revealing anything about her sexuality even after being in the spotlight for years. However, she did dismiss the false claims after being in an open relationship with a model named Mark Leonard Spencer. Unfortunately, they seem to have broken up for some reason.

Our contents are created by fans, if you have any problems of Sugar Lyn Beard Net Worth, Salary, Relationship Status, Married Date, Age, Height, Ethnicity, Nationality, Weight, mail us at [email protected]