Sunmi is a South Korean singer who debuted as a member of the South Korean girl group "Wonder Girls" in 2007. 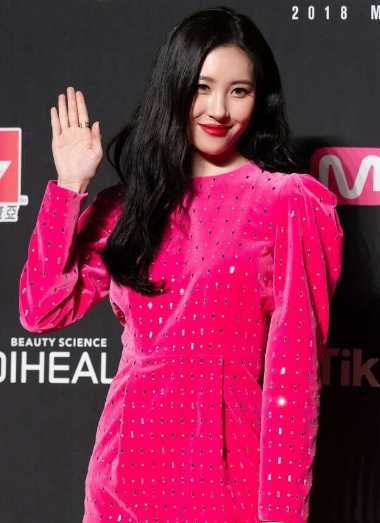 Sunmi is a South Korean singer who debuted as a member of the South Korean girl group “Wonder Girls” in 2007. She is best known for her single “24 hours” and has also won the 2018 “Female Idol of The Year” title.

What is Sunmi famous for?

– Famous as a singer of the “Wonder Girls” group and for her songs like “24 hours”, “Gashina” and “Heroine”.

Where was Sunmi born?

Sunmi was born on 2nd May 1992 in Iksan, North Jeolla, South Korea. Her birth name is Lee Sun-mi. Her nationality is South-Korean. Tauras is her zodiac sign.

She was born into a poor family. She has two younger brothers, Lee Seung-Dong and Lee Sun Dong. Her father was a single parent.

She was raised in her hometown. She did her schooling at Hwangnam Elementary School, Chungdam Middle School, and Chungdam High School. At present, she is completing her graduation from Dongguk University.

Since, her childhood, she wanted to become a celebrity as her father became sick and to afford treatment payments for him. At the age of 14, she became a trainee at JYP Entertainment.

Unfortunately, her father passed away three months before she debuted in 2006. A family adopted Sunmi and her brothers after his father died. She adopted her stepfather’s surname, Lee later in her life.

-On May 2006, She debuted herself as a fourth member of Wonder Girls. The group debuted with The single “Irony” on 10th February 2007.

-On Jan 2010, she postponed her musical career to pursue her academic career.

-In 2013, she debuted on the stage as a solo artist with the single, “24 hours” which gained huge popularity in a short period of time.

-She released another single “Full moon” in 2014. Her single came in no.3 on Billboards K-pop Hot 100 and was praised for being innovative.

-In 2015, She rejoined her group “Wonder Girls” with a band concept of her playing the bass.

-In 2016, her band’s single album “Why So Lonely”, including the title track of the same name was released.

-The band got dismissed after the final single “Draw me” in 2017. She released her single titled “Gashina” as a solo artist for the 1st time in three years.

-She came back with her single “Heroine” in 2018. In the same year, she released another single titled “Warning” along with the hit single “Siren”.

How is Sunmi’s personal life?

Sunmi is currently unmarried. She isn’t in a relationship

What is the net worth of Sunmi?

The South-Korean singer, Sunmi has an estimated net worth of $25 million. She has good earnings from her music and albums.

How tall is Sunmi?

The 27 years aged, Sunmi has a well maintained slim body. She stands with a height of 5ft 6inches and has a weight of 52 kg. She has a fair complexion with brown hair and black eyes.

Our contents are created by fans, if you have any problems of Sunmi Net Worth, Salary, Relationship Status, Married Date, Age, Height, Ethnicity, Nationality, Weight, mail us at [email protected]