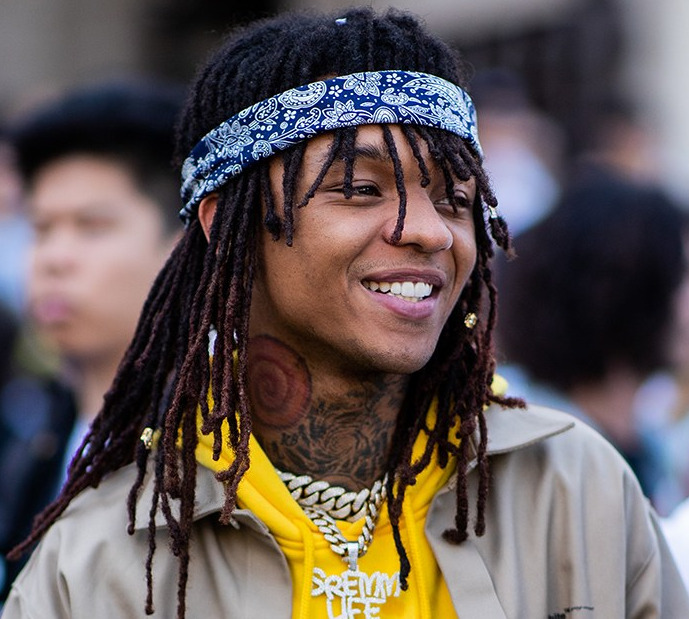 Khalif Malik Ibn Shaman Brown, commonly known as Swae Lee is an American record producer, songwriter, and recording artist. At just age 24, he has become one of the familiar faces in the Hip-hop music industry. He is one-half of the hip-hop duo Rae Sremmurd with his brother Slim Jxmmi.

He became a talking point recently after he told in one of his interviews that he would like to go on a date with Barack Obama’s daughter, Malia Obama.

He posted and soon deleted a sex tape on Instagram.

Talking about the early life he was born on June 7, 1993. He experienced his childhood in Inglewood, California. They soon moved to Texas and later to Tupelo, Mississippi. He began making music with his brother Slim Jxmmi and local rapper Lil Pantz as “Dem Outta St8 Boyz”. He used to perform at parties and shows in their town along with his brother during his childhood. The group began uploading its songs and videos to YouTube with the aim of getting recognition.

He holds American Nationality and belongs to African-American ethnicity. There is no such information about his parents yet. He has two brothers named Slim Jxmmi and Michael Bro.

Information regarding his educational background is currently not available. However, it is ay that he attended Tulepo High School.

The career of Swae Lee

Initially, Swae Lee worked at McDonald’s. He worked hard about 12 hours a day. The boys used to throw parties in the abandoned houses around the area. They used to perform at these parties. Although the initial years were full of struggle, he and his brother slowly started gaining attention among other rappers around the state.

See and Slim signed to Mike Will Made-It’s label EarDrummers Entertainment as Rae Sremmurd in 2013. He and Slim released their first single “We” in 2013. They have since released two studio albums under EarDrummers, SremmLife, SremmLife 2, and SR3MM.

In 2015, He was featured on Mike Will Made-It’s “Drinks on Us”, which also featured artists Future and The Weeknd, and became his first single as a solo artist. In the same year, he was featured on Wiz Khalifa’s “Burn Slow”, which peaked at number 83 on the Billboard Hot 100, making it his first solo entry on the chart.

In 2017, He was featured on French Montana’s “Unforgettable”. The song peaked at number three on the Billboard Hot 100, making it his first top ten single on the chart as a solo artist. In 2018, Jhené Aiko featured him on her track “Sativa.” Two months later, he released a song titled “TR666” alongside Trippie Redd.

In 2018, almost two years after its initial announcement in August 2016, He released his debut solo album, Section as a part of a triple album set, which also contained Rae Sremmurd’s third studio album, SR3MM, and Slim Jxmmi’s debut studio album as a solo artist, Jxmtro.

In 2018, he featured in the song “Close to Me” by Ellie Goulding and Diplo. In the same year, He featured on Post Malone’s song “Sunflower” for Spider-Man: Into the Spider-Verse.

Awards and Achievements of Swae Lee

Net Worth of Swae Lee

Although the exact amount of his salary is not known, the net worth of his estimated to be around $ 6 million.

Swae Lee has been in an on-again-off-again relationship with Instagram model Marliesia Ortiz. Although his name is linked with Blac Chyna recently, it has not been confirmed yet.

Our contents are created by fans, if you have any problems of Swae Lee Net Worth, Salary, Relationship Status, Married Date, Age, Height, Ethnicity, Nationality, Weight, mail us at [email protected]