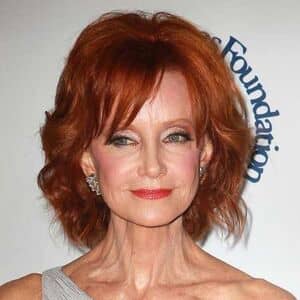 Swoosie Kurtz is an Emmy and Tony-winning American actress. She won a Primetime Emmy Award for her performance in ‘Carol and Company’ whereas her Tony Awards came for her performances in the plays, ‘Fifth of July’, and ‘The House of the Blue Leaves’.

How old is Swoosie Kurtz?

Swoosie Kurtz was born in Omaha, Nebraska, US, on September 6, 1944. As of 2020, her age is 76. She was born as the only child to parents Frank Allen Kurtz (father) and Margaret Rogers (mother). Her father was an Air Force Colonel whereas her mother was an author. Colonel Frank served the ‘United States Army Air Forces’ as an aviator and was a Second World War American bomber pilot.

As a child, Swoosie moved frequently due to her father’s military service. Her ethnicity is English, Scottish, German, Cornish.

Talking about her educational background, Kurtz went to the ‘University of Southern California,’ where she majored in drama. After graduating from there, she studied at the ‘London Academy of Music and Dramatic Art.’

How did Swoosie Kurtz pursue her career?

Swoosie Kurtz began her theatre career in 1975 with her Broadway debut coming in the revival of ‘Ah, Wilderness!’. Fast forward three years, she started gaining acclaim and popularity thanks to her amazing performance in the theatrical production of ‘Uncommon Women and the Others’. Moreover, she also featured in the off-Broadway musical ‘A History of the American Film’ for which she received a Drama Desk Award.

She has also done an impressive job in TV. She appeared in the sitcom “Love, Sidney” for two seasons. In 1990, she won an Emmy Award for her guest appearance in ‘Carol & Company’. After that, she starred in ‘Sisters’ and received two Emmy nominations. Moreover, she also starred in ‘Pushing Daisies’, ‘Lost’, ‘Desperate Housewives’, and ‘ER’.

In 2010, Kurtz starred as Joyce Flynn in the sitcom ‘Mike & Molly’. Recently, she also portrayed Matt LeBlan’s character’s mother in the series, ‘Man With a Plan’.

In addition to TV shows, Swoosie has done a considerable amount of work in movies. Some of the movies she has appeared in include ‘Dangerous Liaisons’, ‘Cruel Intentions’, ‘Liar Liar’, ‘Overboard’, ‘Living Proof’, etc.

How tall is Swoosie?

Kurtz stands at a height of 5 feet 4 inches. In her recent pictures, she has been seen very thin and has lost a lot of weight which led people to speculate that she had been suffering from an eating disorder named ‘anorexia’. However, the actress herself has not confirmed the rumor. She has auburn hair and a pair of blue eyes.

What is the Net Worth of Swoosie Kurtz?

Swoosie Kurtz is single as of 2020. She has never been married in her life and has kept all of her relationships a secret except one.

She was in a relationship with artist and director Joshua White, who is famous for his liquid light show, ‘The Joshua Light Show’. It is a form of psychedelic art that was popular during live band performances of the late 1960s. The couple was together from 1964 to 1970. However, after their break up she has not revealed being in a relationship with anyone and has never given birth to a child.

Our contents are created by fans, if you have any problems of Swoosie Kurtz Net Worth, Salary, Relationship Status, Married Date, Age, Height, Ethnicity, Nationality, Weight, mail us at [email protected]