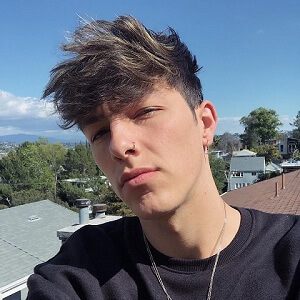 Tayler Holder is a social media influencer as well as an aspiring model. He is famous for his creative content which reaches millions of followers across all major major platforms. Tayler is also well known for his recordings, his major singles include “Fallback” and “Who I am”.

How old is Tayler Holder?

Tayler Holder was born on August 19, 1997, in Alvarado, Texas, United States. His age is 23 as of the year 2020. Talking about his family and personal life, Holder grew up with his mother who’s name is Wendy and his brother Trever.

His mom also has her own Instagram account that goes by the username ‘@wendyholder’ which has about 23 k+ followers. During the early days, Tayler was more drawn into motocross sports which he started riding and competing at an early age of 3.

Tayler is American by nationality, Caucasian by ethnicity, and his zodiac sign is Leo.

How did he start his social media career?

Tayler Holder always had the aim to push his capabilities in the virtual world through social media apps. By setting such a mindset he moved base to Los Angeles, California. In October 2013, Tayler first created his Twitter account. Later, together with his friend, Joseph Birlem, he started a YouTube channel called “Joey and Tayler.”

As the channel grew and so did his popularity, he released his debut single “Who I Am’” in the spring of 2017. He later pursued his career more into acting and is expected to star in a TV series. Moreover, Tayler had gone on to doing endorsements,  creating paid content, and making several tours for big brands.

Tayler has even traveled for performances and meeting his fans. He starred as Luke in the Brat series Dirt and also becoming a member of ‘The Hype House‘ in 2020.

What are Tayler Holder’s net worth and salary?

As Tayler is a popular social media influencer, TikTok content creator, and a YouTuber,  he has an estimated net worth of $700,000. His YouTube contents usually are usually composed of vlogs highlighting what he is up to together with other members of The Hype House.

His channel has over 2.5 million subscribers as of 2020 and has accumulated over 150 million views. The channel is able to gain an average of 430,000 views per day from different sources which should generate an estimated income of $2,200 per day from the ads that appear on his videos.

Who is Tayler dating?

The handsome guy is followed by many teen girls. It’s not a matter of surprise to know about his true dating life. Tayler has been in relationships with Kaylyn Slevin and Kelianne Stankus in the past.

As of today, there is no information about his current girlfriend and relationship status. It seems that Tayler is more directed into his career building process for now by staying away from any such distractions. As of now, he is assumed to be single.

How tall is Holder?

Tayler Holder is a very charming and good-looking guy who has gained popularity and love from many of his female fans. He stands tall at a height of 6 feet and 1 inch weighing about 75 kilograms. As per his social media pictures, Holder appears to be a very fit guy. His body features blue eyes and brown hair.

Tayler Holder is appeared to be most famous and active on the TikTok platform which is a video sharing app. He goes by the username @itstaylerholder amassing over 13.8 million followers. Similarly, he is available on Instagram gathering over 4.5 million followers. His YouTube channel contributes tutorials and daily vlogs for the teen youths, which led him to gather about 1.47 million subscribers to date.

Our contents are created by fans, if you have any problems of Tayler Holder Net Worth, Salary, Relationship Status, Married Date, Age, Height, Ethnicity, Nationality, Weight, mail us at [email protected]