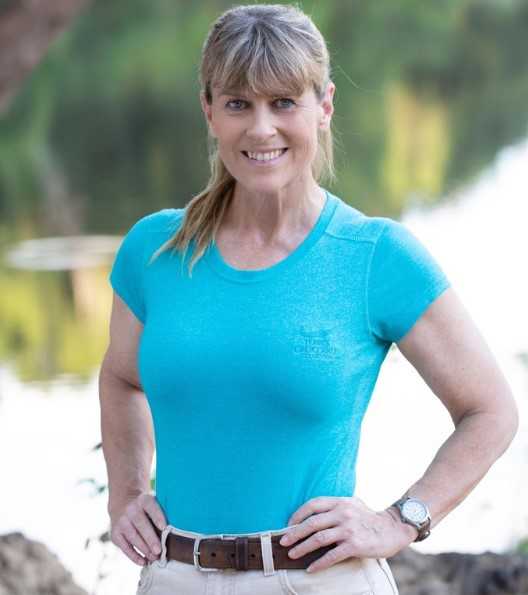 Terri Irwin is an American–Australian naturalist, conservationist, and author. Irwin is popularly known as the owner of “Australia Zoo” in Beerwah, Queensland. Terri is recognized as the wife of Steve Irwin, the late Crocodile Hunter. Terri and her family also appear in their own reality series, “Crikey! It’s the Irwins”. Irwin won the 2007 Queensland Telstra Business Women’s Award.

What is Terri Irwin Famous for?

Where was Terri Irwin Born?

Terri Irwin was born on July 20, 1964, in Eugene, Oregon, United States. Her birth name is Terri Raines. Her nationality is American. Terri belongs to White ethnicity while Cancer is her zodiac sign.

Terri Irwin was born as the youngest child of her parents Clarence Raines(father) and Judy Raines(mother). Both of her parents were environmentalists and even owned a long-haul trucking business. Her father used to bring injured animals from the highways to cure during Terri’s childhood thus, Terri began working in the family business developing following the path of her parents.

She was raised along with her two older sisters.

She soon started her own rehabilitation facility called “Cougar Country” to re-educate and release predator mammals such as foxes, raccoons, bears, bobcats, and cougars back into the wildlife. Focusing her aim on this, she soon began handling 300 animals each year.

Besides, she had 15 cats of her own and several birds. She even bought her own house by the time she was 18.

In 1989, Irwin joined an emergency veterinary hospital as a veterinary technician gaining knowledge about care and support to animals.

In 1991, she went on a tour of Australia, where she met her future husband, Steve Irwin while visiting the Australia Zoo(founded by Steve’s father).

The first episode of the TV series, “The Crocodile Hunter” was filmed at her first documentary made together with her husband, Steve.

Terri Steve Irwin produced and hosted the wildlife series, “The Crocodile Hunter” for 8 years from 1996-2004.

Terri and her husband, Steve partnered with oceanographer Philippe Cousteau Jr. for the documentary, “Ocean’s Deadliest”(2007).

She was made an Honorary Member in the General Division of the Order of Australia.

Terri wrote and published a book titled ‘My Steve’ about her extraordinary life with her late husband, Steve Irwin.

She then contributed to working in the Australia Zoo and wildlife conservation.

In 2014, a new species of spider was named after Terri Irwin called called ‘Leichhardteus Terriirwinae’.

Irwin also received an Honorary Science Doctorate from the University of Queensland in 2015.

In 2018, Terri alongside her children appeared in a reality show, “Crikey! Its’ the Irwins” completely based on their life at the Australia Zoo.

Who is Terri Irwin Married to?

Terri Irwin was married to her late husband, Steve Irwin. Steve was an Australian zookeeper, television personality, wildlife expert, environmentalist, and conservationist. Terri met Steve during her 1991 trip to Australia. They soon fell for each other because of their same taste towards the love of animals that they even got engaged within four months of their first meeting.

Just after 8 months of their first meet, they got married in Terri’s hometown Eugene on June 4, 1992. Their honeymoon was also telecasted as the first episode of the TV series, “The Crocodile Hunter”. They then began living in Australia and together had two children; Bindi Sue Irwin(b. July 24, 1998) and Robert Clarence(b. December 1, 2003). Her daughter got married on March 25, 2020, with Chandler Powell.

However, Steve Irwin got killed in 2006 by a stingray barb while filming underwater. At that time, Terri and her children were on a trek she later said that Steve had always known that he would not live long.

In 2009 Terri Irwin became an Australian citizen. The ceremony was held on the 15th of November, on the day named “Steve Irwin Day”.

What is the Net Worth of Terri Irwin?

The 55 years old Terri Irwin has quite a great earnings through her professional career as a naturalist and zoo-keeper. Working in this field for more than 3 decades, she has managed to amass a fortune worth million dollars. She also makes money from her appearance in series and movies. Her estimated net worth is around $66 million.

Besides, Irwin has built a $26 million property empire all held solely in her own name. Moreover, “Australia Zoo” also rakes in millions from grants and donations which includes a $6 million property paid for by the former federal government last year, which is now held by Mrs. Irwin’s private company.

How Tall is Terri Irwin?

Terri Irwin is a gorgeous lady in her mid-50s. Irwin has a well maintained slim body physique. She stands tall with a height of 5ft. 3.5inch(1.62m). She has a fair complexion with blonde hair and blue eyes.

Our contents are created by fans, if you have any problems of Terri Irwin Net Worth, Salary, Relationship Status, Married Date, Age, Height, Ethnicity, Nationality, Weight, mail us at [email protected]