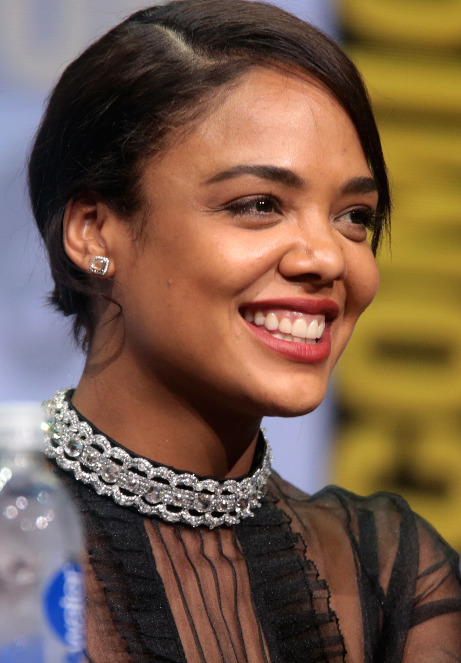 Tessa Lynn Thompson is an American actress who is known as Tess. Her first breakout role was in Tina Mabry’s 2009 indie film Mississippi Damned.

Tessa Thompson was born on October 3, 1983, in Los Angeles, California. Her full name is Tessa Lynn Thompson. Her father’s name is Marc Anthony Thompson who is a singer and a songwriter, who is of Afro-Panamanian descent, and her mother is of European and Mexican descent, and she holds an American nationality. She was raised between Los Angeles and Brooklyn. She attended Santa Monica High School and joined Santa Monica College, where she obtained a degree in cultural arthrography.

Thompson made her professional stage debut in Los Angeles Women’s Shakespeare Company’s production of The Tempest in which she played the role of Juliet in Romeo and Juliet theatre. After that, she appeared in the off-Broadway run of the Lydia R. Diamond play Smart People at Second Stage Theatre in 2016.

On television, Thompson’s first TV appearance was in 2005 in the episode of the CBS series Cold Case in the role of bootlegging lesbian. In addition to this, she took the role of Jackie Cook on the drama series Veronica Mars in the same year. She appeared on the ABC medical drama Greys Anatomy in 2006 and in 2007, she was a part of the cast on short-lived drama Hidden Palms in which she portrayed Nikki Barnes. She worked on the guest star role on Life and Private Practice and appeared in the fourth season of Heroes. Thompson had a guest role as the wife of a detective on Detroit 187 in 2010 and as Gavin Doran’s daughter, Sasha, on 666 Park Avenue in 2012. She starred in BBC Americans first original series Copper in 2013 and in HBO science-fiction drama series West world as board director Charlotte
Hale in 2016.

In the film, Thompson’s appearance was in 2006 in the remake of a horror film, when a stranger Calls playing the role of Scarlet. Then she was seen in the dancing film Make it Happen in 2008. She was cast in the film For Colored Girls in 2010. She starred in Dear White People and played civil rights activist in Ava DuVernay’s Martin Luther King, Jr in 2014. She also appeared in the film Creed and The Grand Romantic in 2015. She was cast in Thor: Ragnarok in 2016, which was released on November 3, 2017. She was cast in Sorry to Bother You, which is set to be released in theaters on July 6, 20185.

Tessa Thompson in June 2018, came out as bisexual during an interview with Porter Magazine saying that: “In my family, you can be anything you want to be.  I am attracted to men and also to women. If I bring a woman home, or a man, we don’t even have to have the discussion.” Besides this, Thompson is dating Janelle Monae Robinson who is an American singer, songwriter, rapper, actress, and model.

Awards and Nominations of Tessa Thompson

Our contents are created by fans, if you have any problems of Tessa Thompson Net Worth, Salary, Relationship Status, Married Date, Age, Height, Ethnicity, Nationality, Weight, mail us at [email protected]