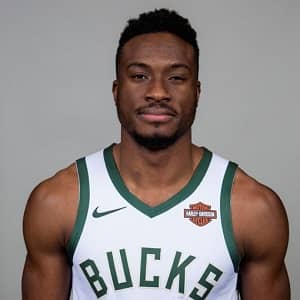 Thanasis Antetokounmpo is a Greek professional player who has already become two times a Greek Basket League champion. He has represented the New York Knicks (2016) and Milwaukee Bucks (2019-Present) in the NBA(National Basketball Association). Antetokounmpo represents the national team of Greece as well.

Greek NBA player Thanasis is the son of his Nigerian parents, Charles Antetokounmpo and Veronica Antetokounmpo. His date of birth is July 18, 1992. Similarly, his birthplace in Athens, Greece. Thanasis’s real name is Athanasios “Thanasis” Rotimi Antetokounmpo. Talking about his birth sign, he belongs to Cancer horoscope. Currently, Thanasis’s age is 29 years old as of 2021.

Furthermore, the two-time Greek professional player belongs to Nigerian nationality whereas his ethnicity is African. The Thanasis family belongs to an athletic background. Charles, his father died in  2017 due to a heart attack, was a Nigerian soccer star. Likewise, his mother was an avid athlete who performed high jumping.

How did Thanasis Antetokounmpo pursue his career?

As we know that Thanasis Antetokounmpo is a Professional BasketBall player, Thanasis began his professional career in 2012. Thanasis and his brother Giannis played in the second Greek league. He performed well and showed good stats which led him to enter the Greek All-Star weekend. After playing one season there, he decided to move to the USA  and became the ninth on the 2013 NBDL Draft. There, he played 50 games and went to the 2014 NBA Draft. Thanasis’s NBA career went up and down throughout the time. He joined the Knicks for the 2014 Summer league.

Similarly, in summer 2015, Thanasis again united with Knick and signed a two-year $1.4million contract. In the year 2016, Thanasis established his seat in the domestic league of Europe, the Spanish Liga Endesa, as a member of Andorra. Because of his contribution, his team got into the playoffs. Because of his great gameplay, Antetokounmpo was declared as the MSP of the season.

Thanasis returned to Greece and joined Panathinaikos in July 2017. Antetokounmpo won all personal awards and national tournaments after being a member of one of the most titled European clubs. Going ahead, Thanasis  signed an agreement with the Milwaukee Bucks on a two-year contract on 7 July 2019.

Till now, the 29 years old athlete is neither married nor in any kind of relationship. therefore, we can say that Thanasis is still single at present. There is a rumor that Antetokounmpo is currently dating a star volleyball player Mariah Riddlesprigger. However, Thanasis has not disclosed any kind of such information.

Moreover, his past relationship status is still unknown and other rumors are also not disclosed properly to the public.

What is the net worth of Thanasis Antetokounmpo?

Thanasis Antetokounmpo is one of the most starred professional basketball players. He signed a two-year contract whose value was $3147290 with the Bucks in 2019. Similarly, in the 2019/2020 season, his salary was estimated to be nearly a 1.5million dollars.

His main source of income is from basketball contracts. Currently, Thanasis is involved in two years/ $3,147,290 contract with  Milwaukee, which was signed in 2019. Moreover, his salary is likely to increase and reach around $ 1,701,593.

The 29years old athlete stands tall with an impressive height of 6 feet and 6inches(1.98m). Similarly, one of the fittest athletes, Thanasis Antetokounmpo has got 99kg (219lbs) weight. Besides, other information such as his shoe size or eye color, and hair color is still not disclosed.

Our contents are created by fans, if you have any problems of Thanasis Antetokounmpo Net Worth, Salary, Relationship Status, Married Date, Age, Height, Ethnicity, Nationality, Weight, mail us at [email protected]