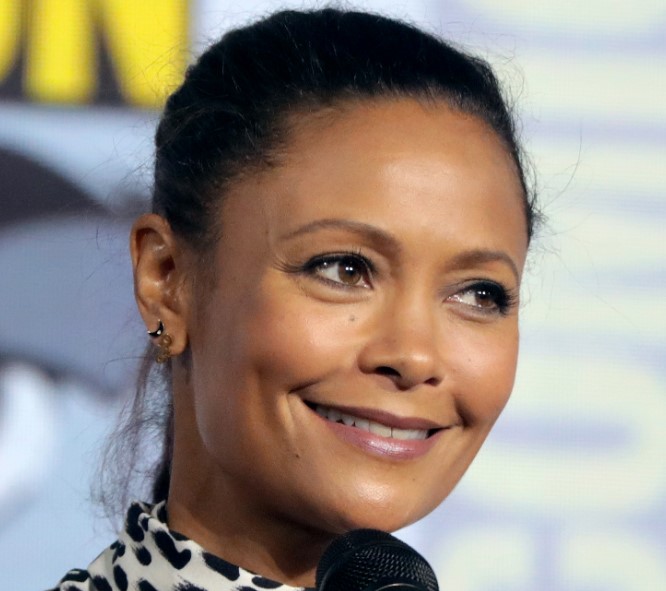 Thandie Newton is an English actress who is well known for her portrayal as Christine in an Academy Award-winning movie, “Crash”(2004). She first gained recognition for her role as a faithful house slave, Yvette in the horror film, “Interview with the Vampire”(1994). In her over 20 years long career, she has played several roles representing the downtrodden black community in Europe and America.

Newton also has played the role of a sentient android, the madam Maeve Millay, in the HBO science fiction-western series, “Westworld” in 2016. In a recent interview in June 2020, Newton explained that she dropped out of a blockbuster movie role 20 years ago in 2000 film adaptation of “Charlie’s Angels” because she felt objectified in casting meetings and for her character being sexist and racist.

Besides, Newton is quite active in social media sites with over 261k followers on her Instagram: @thandienewton.

What is Thandie Newton Famous for?

Thandie Newton was born on November 6, 1972, in Westminster, London, England. Her birth name is Melanie Thandiwe Newton. Her nationality is British. Newton belongs to mixed ethnicity while Scorpio is her zodiac sign.

Thandie was born in a renowned family as the daughter of Nick Newton(father) and Nyasha(mother). Her mother, Nyasha was a Zimbabwean princess of the Shona people while her father, Nick is an English laboratory technician and artist.

When she was very young, she was in Zambia after which her family moved to England where she grew up with a vibe that she didn’t fit in the all-white Catholic school. She has a younger brother named Jamie.

She studied dance at the Tring Park School for the Performing Arts, however, she couldn’t continue due to a back injury. Later, she got graduated earning a degree in social anthropology from Downing College in Cambridge.

Thandie Newton is currently married to Ol Parker. Parker is an English writer, director, and producer with whom she even has worked together as Noreen Hurlock in a film written and him, “It Was an Accident”. They got married in 1998 and together share 3 children: 2 daughters Ripley(b. 2000) and Nico(b. 2004), and son Booker Jombe(b. 2014).

Also, Newton had home births with all three of her children. Previously, when she was just 16, she was in a relationship with Australian film director John Duigan. Duigan and Newton dated for 6 years however, they couldn’t continue with their relationship so far.

Besides, she is vegan and was named PETA’s “Sexiest Vegan of 2014” in the UK. She also has been an activist in the field of child welfare and even has written a book titled “We Wish: Hopes and Dreams of Cornwall’s Children”.

Thandie Newton has quite good earnings from her professional career as an actress Having been in this field of acting and show business for over, Newton has managed to earn quite a healthy fortune from her movies and series. Her net worth is estimated to be around $12 million.

Thandie Newton is a gorgeous lady in her 40s. With her marvelous acting skills and heart-warming smile, Newton has managed to win several hearts all around the world. She stands tall with a height of ‎5ft. 3inches(1.60 m) while her body weighs around 50kg(110lbs).

She has a perfectly maintained slim body physique of measurement 34-25-35 inches with 32A as her bra size and 2(US) as her dress size. She has a brown complexion with black hair and brown eyes.

Our contents are created by fans, if you have any problems of Thandie Newton Net Worth, Salary, Relationship Status, Married Date, Age, Height, Ethnicity, Nationality, Weight, mail us at [email protected]