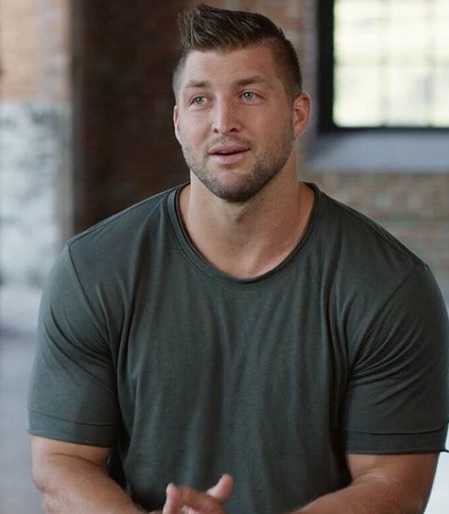 Tim Tebow is a former professional American football player and current professional baseball outfielder. He plays for the New York Mets and wears shirt number 15. He bats and throws left. He signed with the New York Mets in 2016. Previously, he played American football as a quarterback. The Denver Broncos selected him in the first round of the 2010 NFL Draft. He has also played football for New York Jets, New England Patriots, and Philadelphia Eagles.

He is an active philanthropist. He launched the Tim Tebow Foundation in 2010 and was designated a Great Floridian by Florida Government Rick Scott in recognition of his “major contributions to the progress and welfare” of Florida.

The New York Mets outfielder got engaged to the 2017 Miss Universe, Demi-Leigh Nel-Peters of South Africa.

The 31-years old former football quarterback and current baseball outfielder are now engaged to the beauty pageant titleholder from South Africa, Demi-Leigh Nel-Peters. She is the winner of 2017 Miss South Africa and 2017 Miss Universe. They got engaged on 9 January 2019 at his family farm in Jacksonville, Florida.

They both went to Instagram to share the news about their engagements. In the first picture shared, Tebow is seen bent on one knee and proposed to the beauty queen.

He captioned his post, “@demileighnp Thank you for saying YES and making me the happiest man in the world. You’re the love of my life, and I can’t wait to spend the rest of my life with you.”.

The two started dating when she was the reigning Miss Universe, which she won in 2017. Their love grew stronger over time and has stepped into the next step of their lives.

– First home-schooled athlete to be nominated for Heisman Trophy.

Tim Tebow was born on 14 August 1987. His birth name is Timothy Richard Tebow. He was born to a father, Robert Ramsey Tebow II, and mother, Pamela Elaine. His birthplace is in Makati City, Philippines. His parents moved to the Philippines where they served as Baptist missionaries. His mother fell into a coma after she contracted amoebic dysentery. Due to medications used in her recovery, doctors expected a stillbirth and they recommended the couple an abortion. The couple did not agree upon abortion and gave birth to Tim in Manila. They moved back to the United States when Tim was three years old. He has four siblings. He is the youngest among Robby Tebow, Peter Tebow, Katie Tebow Shepherd, and Christy Tebow Allen. He is a Christian. His zodiac sign is Leo. He was homeschooled by their parents.

Though he did not enroll at the high school, he began his football career at Trinity Christian Academy. He then played as a quarterback for Allen D. Nease High School. He attended the University of Florida under athletic scholarship and graduated in December 2009.

He was named Florida’s Player of the Year during his junior season at Nease.

He led Nease to the state title during his senior season. He earned All-State honors.

He played in the U.S. Army All-American Bowl in San Antonio, Texas.

He became the subject of an ESPN “Faces in Sports” documentary in a segment titled, “Tim Tebow: The Chosen One”.

He was named to the Florida State Athletic Association’s All-Century Team that listed the Top 33 football players in the state of Florida’s 100-year history of high school football.

He was also featured in an ESPN Outside The Lines.

He received the 2008 Quaqua Protege Award as an outstanding home-education graduate.

He accepted an athletic scholarship to attend the University of Florida.

Initially, he was a backup quarterback as a freshman. He became the starting quarterback in the 2007 season.

He won the Heisman Trophy and Davey O’Brien Award in 2007.

He held 5 NCAA, 14 SEC, and 28 University of Florida statistical records at the end of his college career.

Denver Broncos selected him in the first round with the 25th overall pick on the 2010 NFL Draft.

He became the first quarterback in NFL history to rush for a touchdown in each of his first three career starts.

He played for The Broncos for two seasons.

The Broncos traded him to the New York Jets in March 2012.

He played only a season and was released by the New York Jets in April 2013.

The New England Patriots signed a two-year contract with no guaranteed money with him in June 2013. The contract included playing-time based incentives.

However, the Patriots released him in August 2013 following his performances.

The Philadelphia Eagles signed a one-year contract with him in April 2015, competing for the third-string quarterback place.

The Eagles released him in September 2015.

HarperCollins released an autobiography, Through My Eyes in May 2011. Tebow co-wrote it with author Nathan Whitaker.

The book was named the number 1 sports book of 2011 and the best-selling religion book of 2011.

He later co-wrote a young readers’ edition titled, Through My Eyes: A Quarterback’s Journey.

In December 2013, he began his broadcasting career on the SEC Network.

ESPN hired him as a college football analyst and appeared mostly on the SEC Network as co-host of SEC Nation.

He was an all-state player during his junior year in High School.

He held his tryout at Dedeaux Field in front of 40 MLB scouts in August 2016.

He signed a minor league contract with the New York Mets in September 2016.

He participated in the Mets’ instructional league and was assigned to the Scottsdale Scorpions of the Arizona Fall League.

The Mets promoted him to their Double-A team, the Binghamton Rumble Ponies of the Eastern League in 2018.

He broke the hamate bone in his right hand causing him to miss the remainder of the 2018 season.

The 31-years old baseball outfielder is engaged to Demi-Leigh Nel-Peters. She is the former Miss Universe and Miss South Africa, both crowned in 2017. They got engaged on 9 January 2019. They started dating when she was the reigning Miss Universe. Previously, he was romantically linked with Lucy Pinder, Camilla Belle, and Olivia Culpo.

He has maintained his virginity until marriage as he holds a stand in favor of faith-based abstinence.

Net Worth of Tim Tebow

In July 2010, he signed a five-year contract with the Denver Broncos that had a base value of $11.25 million, including $8.7 million guaranteed and performance-based incentives. He is the spokesperson for Nike, Jockey International, FRS Health Energy, and TiVo.

The life-sized wall graphics company Fathead released a “Tebowing” sticker which became the company’s best-selling product in two days in December 2011. As of 2019, his net worth is estimated at around $10 million.

Our contents are created by fans, if you have any problems of Tim Tebow Net Worth, Salary, Relationship Status, Married Date, Age, Height, Ethnicity, Nationality, Weight, mail us at [email protected]