Timo Phil Horn is a German professional footballer who plays as a goalkeeper for 1. FC Köln. 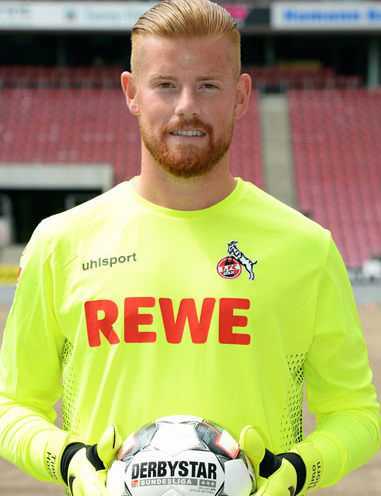 Timo Phil Horn, professionally known as Timo Horn is a professional football player. He plays as a goalkeeper for the German club FC Koln. He started his youth career at SC Rondorf. He has represented various German youth teams before representing the senior team at the 2016 Olympics.

What is Timo Horn Famous For?

Where was Timo Horn Born?

Timo Horn was born on 12 May 1993. His birth name is Timo Phil Horn. His birthplace is in Cologne in Germany. He holds German nationality. His zodiac sign is Taurus. His father is Stefan Horn. His mother’s name is not available at present. He has a brother Tassilo Horn.

Horn started his youth career at SC Rondorf in 1999.

He played for the club’s youth team until 2010.

He was promoted to the senior team in 2010 but did not make any appearances for the first two senior seasons.

He was on both the senior and reserve team squads.

The club relegated to the 2. Bundesliga after the conclusion of the 2011-12 season.

The club released their top two goalkeepers, Michael Rensing and Miro Varvodic from the club.

He helped the club to finish 5th in the 2. Bundesliga after the conclusion of the 2012-13 season.

He helped the club to promotion to Bundesliga finishing 1st in the 2013-14 season.

Koln made his Bundesliga debut against Hamburger SV on 23 August 2014.

He recorded a feat of not conceding a goal in his first four Bundesliga matches.

he signed a contract extension with the club in December 2014. The deal would keep him until 2019.

Following the 2015-16 season, he was voted as the team’s Player of the Season.

He signed a contract extension with Koln in April 2018. The deal would keep him at the club until 2022.

He made his senior international debut in 2016.

He represented the senior team at the 2016 Olympics.

Germany won the silver medal at the 2016 Olympics.

Who is Timo Horn dating?

No personal information about his relationship status is available at present. He has maintained a low profile.

What are Timo Horn Body Measurements?

What is Timo Horn Net Worth?

Timo Horn earns from his professional football career. His income comes from salary, bonuses, contracts, and endorsements. He has already signed two contract extensions at his current club. His salary and net worth will be updated soon.

Our contents are created by fans, if you have any problems of Timo Horn Net Worth, Salary, Relationship Status, Married Date, Age, Height, Ethnicity, Nationality, Weight, mail us at [email protected]