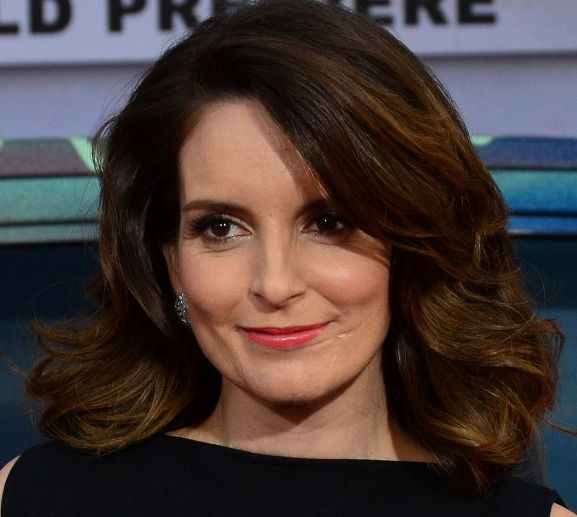 Tina Fey is an American actress, comedian, writer, and producer best known for her comedy series and for her work in film with her most notable appearances.

Tina Fey’s real name is Elizabeth Stamatina Fey who was born on May 18, 1970, in Upper Darby, Pennsylvania. Her father’s name is Donald Henry Fey who was a Korean War veteran, universit5y administrator, and grand proposal writer and her mother’s name is Zenobia “Jeanne” Fey who worked in a brokerage firm.

At the age of five, when Fey was in an alley behind her house, a stranger approached her and slashed her face with a knife, leaving a scar that she still carries today. She attended Cardington-Stone Hurst Elementary school and Beverly Hills Middle School in Upper Darby. In school, she was interested in comedy. She was an honors student, a member of the choir, drama club and tennis team and co-editor of school’s newspaper. She graduated in 1988. She enrolled at the University of Virginia, where she studied in playwriting and acting and was awarded the Pettway Prize. She graduated in 1992with a Bachelor of Arts degree in drama.

After graduating from college in 1992, she moved to Chicago to pursue a career in the comedy field.  There she joined comedy training ground Second city a renowned program where many Saturday Night Live (SNL) performers got their start.

While performing shows with The Second City in 1997 she submitted several scripts at the request of its head writer who is a former performer at Second City. She was hired as a writer for SNL. And move to New York from Chicago. Fey struggled at SNL.  She was an extra in a 1998 episode, after watching herself she decided to diet and lost 30 pounds. In 1999 She became SNL’s first female head writer.

In 2000 Fey began performing in sketches and she and Jimmy Fallon became co-anchors of SNL’s Weekend Update segment.  It was during the show’s 25th season where she was able to transform her image and establish the fan base. Fey was cast as news reporter on the regular sketch, where she wrote many of the segments with the most popular jokes.

In 2002, Fey suggested a pilot episode for a situation comedy which was rejected. The pilot was reworked and was accepted by NBC. Fey signed a contract with NBC in May 2003, which made her continue in her position as Head Writer in SNL.  As part of the contract, she was to develop a prime time project. She managed her relationships with the shows volatile stars and the new head of the network. The episode received favorable reviews but it finished third in its timeslot. This series made her won many awards.

Fey created and produced the television comedy Unbreakable Kimmy Schmidt with her fellow members. It also stars her former co-worker. It was originally made for NBC but it was sold to Netflix. It became famous and was renewed for the second season. The show premiered on March 6, 2015. And in the second season, Fey also joins the cast. The subsequent two seasons were also nominated for Primetime Emmy Awards for Outstanding Comedy Series.

Fey’s charity work includes support of Autism speaks which is an organization that supports or sponsor autism research.  She is also a supporter of Mercy Corps, a global relief and development organization. Their main aim is to end the world hunger. She also supports the Love Our Children USA organization which fights violence against children.

Fey has won numerous awards. Among them she has won nine primetime Emmy Awards, three Golden Globes, five Screen Actors Guild Awards, seven Writers Guild Awards, and three Producers Guild Awards and has been nominated for Grammy awards. She was awarded as Mark Twain for American Humor in 2010. She also received her first Tony Award nomination for Best Book of a Musical for Mean girl.

Our contents are created by fans, if you have any problems of Tina Fey Net Worth, Salary, Relationship Status, Married Date, Age, Height, Ethnicity, Nationality, Weight, mail us at [email protected]